I am just off a few days of vacation down at Lake Texoma. I’ll give more details later. Thanks for reading this week’s DHD!

Daniel Porter, staff writer for the Baptist New Mexican gives a great account of a lady who helped unify the Southern Baptist Convention in the area of racial reconciliation.

I love this story. It reminded me loosely of the underlying mission told in the movie Green Book.

I would love to see a movie that would share stories such as this one of Annie Gilmore, who showed much courage to travel a long distance to attend a WMU Conference in 1953. I also admire Dale Danielson and his compassion for Gilmore.

Another Baptist Press story this week reports the severity of the treatment Christians are facing in China. Check out “Report: China ‘there is no longer a safe place to be a Christian.’”

Church leaders are in prison. They are “charged with such crimes as illegal business operation, unlawful assembly, disrupting public order or endangering national assembly.”

“With the intensified crackdown against churches, both state-sanctioned and underground, there is no longer a safe place to be a Christian in China,” wrote Gina Goh of International Christian Concern. Goh added that “almost every province in China has seen Christian persecution on the rise.”

Pray for Christians in China, asking for God to do a mighty work.

In yet another Baptist Press report, Tom Strode wrote this week that Planned Parenthood of Greater New York will distance itself from PP’s founder Margaret Sanger who was historically known to promote eugenics advocacy.

Strode reported that Pro-life leaders want to see more than the New York PP removing Sanger’s name from its building.

“Removing Sanger’s name cannot erase the connection between her racist, eugenic ideas central to the founding of Planned Parenthood and the dehumanizing ideology that continues today at the heart of the abortion industry,” said Elizabeth Graham, who directs women’s and pro-life initiatives for the Southern Baptist Ethics & Religious Liberty Commission.

For those who are calling for removing statues and names on buildings of people in American history due to involvement in racism, I can support this move, but I also agree with Graham who is asking for more. I’m hoping more will come on board and support as aggressively the end of Planned Parenthood’s practice of abortion and how the organization’s history is reeked with racism.

Stacy Reoch gives a great commentary on how Christians should engage in social media. Check out “What do our words say to a watching world?”

Here’s a summary that affects all Christians involved in current social issues:

“If you desire states to reopen, some think you don’t truly care about the health of our nation. If you desire them to stay closed, then you’re said to be promoting an economic crisis. If you march in a protest, you’re accused of contributing to the riots and anarchy. If you choose not to protest, you’re accused of not caring about racial injustice. It’s a lose-lose situation.”

Reoch then applies scriptural guidance that is helpful and constructive to continue in posting in social media.

I’ve come to a conclusion that the most effective way to communicate with people on social issues is one-on-one. Meet someone in person, over the phone or through direct messaging. There seems to be less posturing and tension. And it could lead to less de-friending on Facebook.

Also, as in the words of our Oklahoma Baptists’ leader Hance Dilbeck in his recent column “A storm is brewing,” guard fiercely the unity of the church.

“Godly, faithful members of the body,” Dilbeck wrote, “are called to preserve, maintain and keep the fellowship that God has given them with one another. Paul implores us to unity, and he challenges us to be diligent. It is no easy task. Any fool can fight, and any child can throw a fit. It takes men and women who are full-grown disciples to protect the unity of the church.”

I need to finish this up. As I’m writing a scrimmage between the Oklahoma City Thunder and the Boston Celtics is tipping off in 10 minutes. And I plan to watch, as this matchup rekindles the Thunder’s final contest before the NBA season suspension in March.

That was probably the third best finish of the Thunder’s 2019-2020 season so far (1. Thunder hosting Minnesota with Steven Adams full-court touchdown pass to Dennis Schroder for the tying basking at the buzzer of regulation; 2. Thunder defeating Rockets in Houston, overcoming a major deficit for the comeback win).

Also, another nifty perk for this scrimmage is the return of Andre Roberson who hasn’t seen action on the court since January 2018.

I end this week’s DHD is a photo from our fishing excursion this week at Lake Texoma. Karen and I, enjoyed spending time at the lake with some friends. We didn’t catch a lot of fish, but I thought we did fairly well as amateur fishermen. 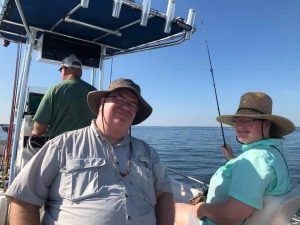