Churches ‘Gear up! Get Ready! Game on!’ for Vacation Bible School 2018

As summertime quickly approaches and schools let out for the year, it can only mean one thing across Oklahoma Baptist churches—Vacation Bible School (VBS) is coming!

The theme for Lifeway Christian Resource’s VBS 2018 curriculum is “Game on! Gear up for life’s big game.” 2 Peter 1:3 is the theme verse, which says, “His divine power has given us everything required for life and godliness through the knowledge of Him who called us by His own glory and goodness.”

Mark Jones, Baptist General Convention of Oklahoma (BGCO) childhood education consultant and Oklahoma City, Quail Springs children’s pastor spoke with much anticipation about the “evangelistic vehicle” of reaching children and their families. “Helping people understand that VBS is like a mission trip—only you get to sleep in your own bed—is imperative,” he said. “It is one solid week of sharing Christ constantly.” 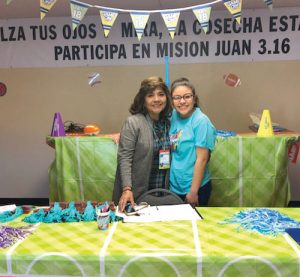 According to LifeWay’s website, “Vacation Bible School has been a vital part of church ministry since 1898 and is used by more than 25,000 churches each year to reach 2.5 million people. Last year, more than 70,000 salvation decisions were reported as a direct result of VBS.”

Many churches host VBS soon after school lets out for the summer. In many Oklahoma towns, it is common to see children walking to the local Baptist church to participate in what is surely a highlight of their summer each year.

A part of VBS is an evangelistic day, where teachers and leaders begin to offer stories about the gift of salvation and “really begin to draw the nets in towards the end of the week,” Jones said. Also toward the end of the week, Jones said many churches host family worship nights or a “family rally,” so families can experience a glimpse of what their child is learning each day at VBS.

Some key elements in many VBS weeks are music, games, crafts and Bible stories. This is why Jones thinks children look forward to VBS each year. “It’s a party,” he said. “Usually the theme, music—music time is kind of like the decorations. It just adds to the energy—and when you can hit the brakes and everything in the church changes, it’s so much fun for the kids. They’re getting friends who don’t go to their church to come with them, so it amps up excitement quite a bit.“

All training for VBS is funded through the Cooperative Program and individual associations. State leaders receive training who then train associational leaders and so-on. Jones said there is a place for everyone to serve in their local church’s VBS.

“In our church, we ask the deacons to follow up with families whose child attended VBS, and they make it a point to visit the family that evening and tell them how cool it was to have their child in VBS today. 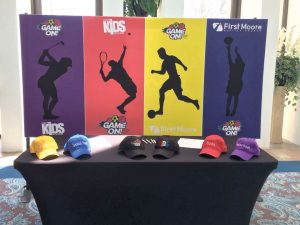 A table for volunteer sign-up at Moore, First. Each hat represents an area in which volunteers are needed.

“A lot of churches drop the ball on follow-up, so we are emphasizing that because it is a time where you have an open road back to the family because you can say, ‘Hey we had a great time with your little one at VBS. Here is more about our church. We would love to get to know you,’” Jones said.

Vacation Bible School is a free event that opens doors to children who may not be able to afford to pay for children’s camp or sports camp.

Jones said there is no better time to start preparing for VBS than as early as possible. At Quail Springs, staff and volunteers began preparation for their summer “flagship event” back in January.

There are several ways in which someone interested in volunteering for VBS can become involved, such as making decorations, preparing curriculum, praying, volunteering time and more.

“People who have full-time jobs can even volunteer to craft ahead of time or be on the setup team once the event is near.”

Jones encourages churches to enlist a prayer team that prayer walks the church building, leading up to the event. Even people who are home-bound can be involved in VBS in this way.

As churches across Oklahoma “Gear up! Get Ready! Game on” for a busy summer schedule, Jones is hopeful.

“Honestly, God’s hand is on this. It has been for a long time. We ought to really just recognize how He’s leading and just join with Him.”