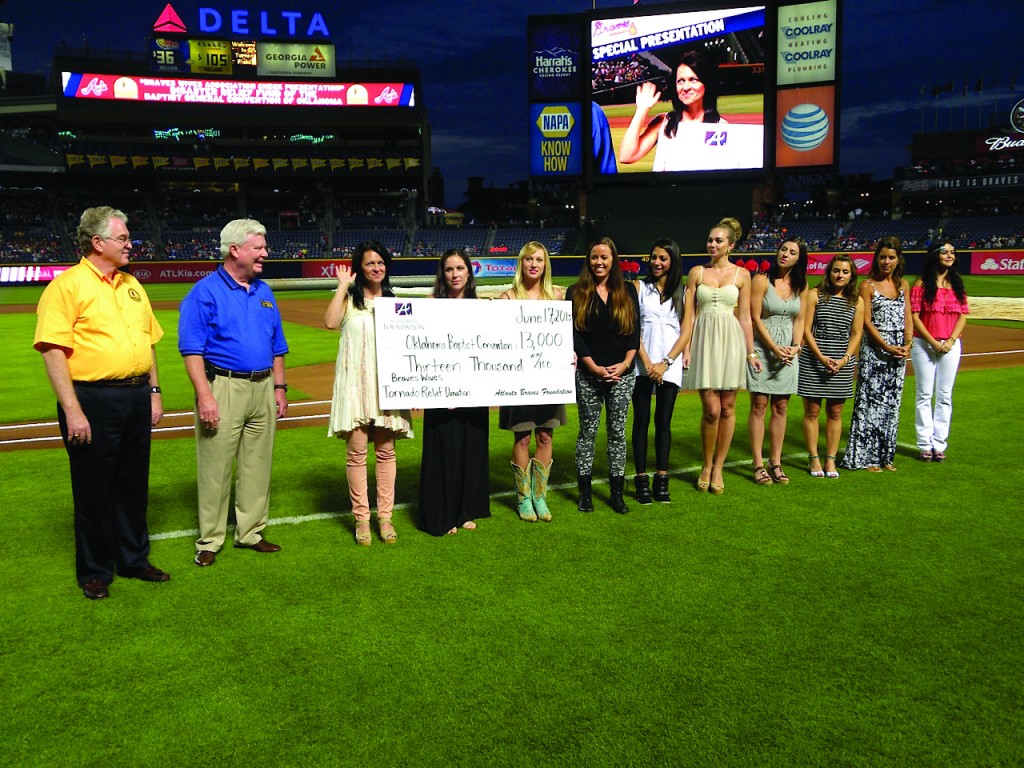 ATLANTA—According to the Associated Press, the May 20 tornado created more than $2 billion in damage to 13,000 homes and multiple schools and businesses as well as a hospital.

The Oklahoma Emergency Medical Services Authority (EMSA), FEMA, the Red Cross, The Salvation Army, Oklahoma National Guard and many others are responding to the needs of those victimized by the tornadoes’ wrath, but Southern Baptists can be proud of their disaster relief efforts. Hundreds of Southern Baptist Disaster Relief volunteers from more than a dozen states have traveled to Oklahoma to bring help, healing and hope.

The wives of the Atlanta Braves have been burdened for the victims of the Oklahoma tornadoes and raised money for the relief efforts on Sun., June 9 with a “Brown Bag Bonanza” mystery baseball sale. The bags contained autographed baseballs.

On Mon., June 17, just prior to the Braves game with the New York Mets at Turner Field, the Braves wives presented to Anthony L. Jordan, executive director-treasurer of the BGCO, a check for $13,000—money that was raised through the Brown Bag Bonanza.

Georgia Baptist Convention Executive Director J. Robert White accompanied his Oklahoma counterpart onto the diamond at Turner Field as Jordan received the check from Kim Hudson, wife of Braves pitcher Tim Hudson, who started the game on the mound for Atlanta after a long rain delay.

Jordan, who was interviewed by The Index prior to the game, stated, “I am a native of Oklahoma and grew up as a fan of the St. Louis Cardinals, but tonight I have decided to be a Braves fan.

“We are extremely grateful for the money provided by the Atlanta Braves wives and promise that every dollar will be used to help people recover from the storm. None of this money will be used for administrative purposes.

“So far, Southern Baptists have prepared 175,246 meals for the victims of the tornadoes and disaster relief workers who have come to the aid of those affected by the vicious storms,” Jordan explained. “Southern Baptists prepared the meals and the Red Cross and Salvation Army delivered them. Additionally, 1,120 home sites have been cleared of the rubble and debris and we have been able to distribute more than $1 million to 525 families.”

In a telephone interview, Sam Porter, who heads up the disaster relief ministry of the BGCO, added, “It generally costs between $5,000 to $8,000 to clear a site. So, when we are called upon to cut down damaged trees and remove tons of debris from homes that have been destroyed we not only provide needed help in a time of crisis, but we also save each family thousands of dollars, because it is all done free of charge.

“Because of the long lead-time necessary to receive assistance from state or federal sources, the Southern Baptists are prepared to assist more rapidly and with less red-tape than government agencies,” Porter said.

“We use pastors to help us identify those families who need our assistance the most, but we have also focused on helping the families of first responders.

Porter concluded, “We provide trained counselors to help people with the emotional stress resulting from these national disasters. Jordan has been on the scene ministering to the victims of the tornadoes and encouraging pastors in the areas affected by the lethal storms. Spiritual counseling is also offered and, so far, we have seen 60 people trust Christ as their personal Savior.

“The tornadoes that hit Oklahoma in May were tragic to be sure, but they could have been so much worse. While Moore, Shawnee, and El Reno were severely damaged, the twister that hit Shawnee just missed Oklahoma Baptist University. No churches were seriously damaged and the second tornado seemed to skip over the densely populated Hispanic section of south Oklahoma City.

Before the night was over, White surprised Jordan with a check of $75,000 from Georgia Baptist churches with the promise that more was on the way.