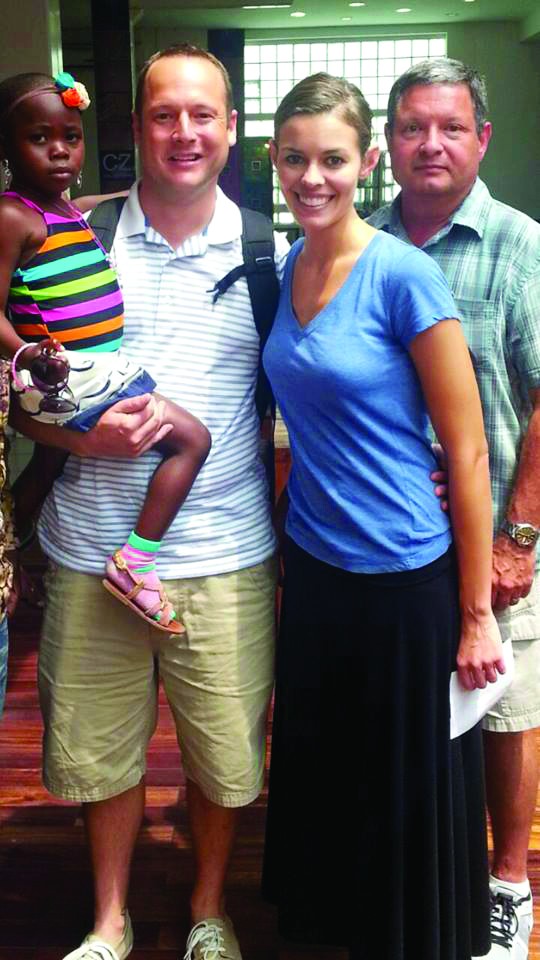 SHAWNEE—Brian Morris is experiencing a lot of new beginnings in his life. He is still beginning his stint as assistant athletic director for external operations at Oklahoma Baptist University (OBU). From an athletic development standpoint, he is helping the OBU community embrace the beginning of a new era of Bison football.

Morris and his wife Lindsay had just moved back to Oklahoma with their two boys, Bennett and Caleb. They were living in Edmond, visiting Edmond, Henderson Hills, where they met a little boy in Bennett’s Sunday School class named Eli who was adopted from Ethiopia. Morris said meeting Eli “became the catalyst God used to spark our minds towards adoption.”

Without telling any family or friends, Lindsay and Brian began praying about the possibility of adoption.

“We just didn’t know how people would respond, and we didn’t want our decision to be swayed by anyone or anything other than the Lord,” he said.

Much soul searching, researching about the conditions of orphans worldwide, praying and Scripture reading helped strengthened their consideration to adopt, but according to Morris, a late night moment was the deciding factor.

“Caleb, our youngest, began crying in his crib,” he said. “I am usually a pretty deep sleeper, but his crying woke me up, and I went into his room to hold him. The moment that I picked him up, I had an overwhelming feeling come over me that I could not dismiss: ‘My son is here crying, and I am able to comfort him, but who is comforting God’s children in the orphanages who are crying for someone to come and hold them?’ God used that moment to solidify the calling on our lives, and we decided we would walk in faith and begin the process.”

Deciding where to look, receiving guidance from church family and ministry staff at Oklahoma City, Quail Springs, and filling out a “mountain of paperwork” was just the beginning of their adoption journey. How they decided on a country came after attending an Oklahoma City Thunder game and learning Thunder forward Serge Ibaka was from the Congo. Though Ibaka’s country, Republic of Congo, did not have adoption programs, the neighboring DRC did. 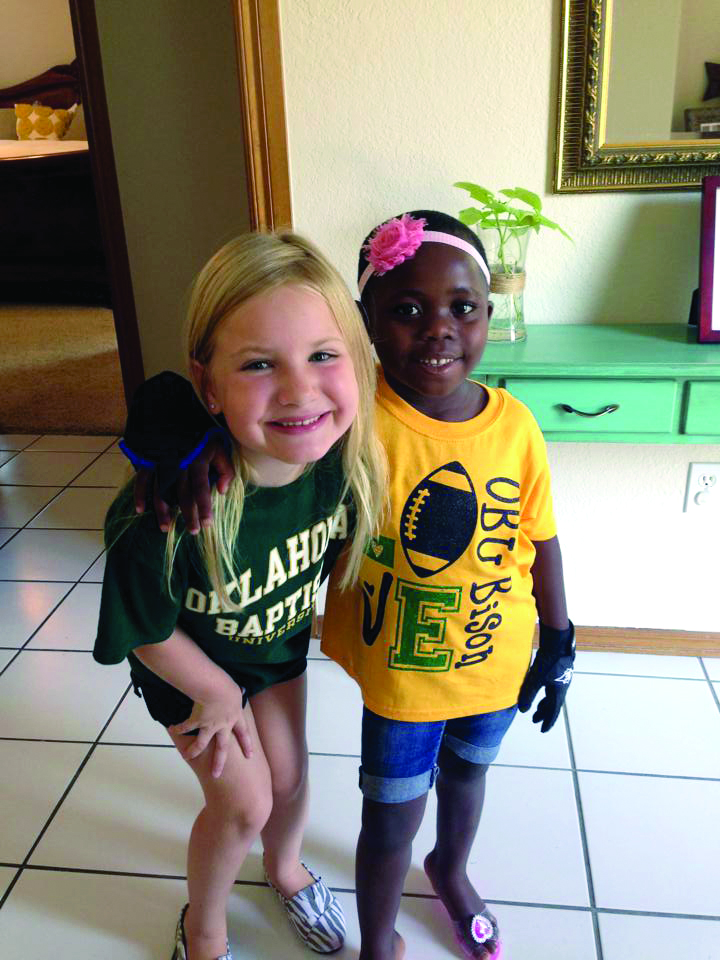 Esther and her friend Keylee are ready to go to the OBU football game.

So many twists and turns followed on their adoption journey. When Brian and Lindsay thought they were making progress in adopting a Congolese baby girl, heavy disappointment occurred as they received a one-sentence message that she passed away as a result of a short illness.

“That is all the information we ever received,” he said. “There were many times that we questioned God and asked question, ‘Why?’ We will never know or understand why this had to happen, but we decided we had to continue to trust in God’s faithfulness and continue (the adoption process). We knew that no matter how many referrals we lost, how much money we had to continue to spend or how difficult things would become that we had to trust that the Lord would get us through.”

While continuing this extensive journey, Morris accepted his current position at OBU, and the family moved to Shawnee and joined Shawnee, Immanuel.

After their sixth referral ended in disappointment, Brian and Lindsay received a call from their adoption agency about a slightly older child who had been in the orphanage for only a couple of days. “Her father was a soldier who was killed during in-country fighting, and her mother was homeless and lived in a military camp,” he said. “We were told that she had an amazing personality and was a ‘firecracker.’”

Just a little more than a month ago, Brian and Lindsay got word that the U.S. Embassy concluded their investigation, and the adoption was final. “Lindsay and I were in a state of disbelief as we had become so guarded from the failure of the previous referrals that we were caught off guard,” Brian said. “Also, as I attribute to the Lord’s sense of humor, of course the three-year process would culminate while we were only weeks away from the first OBU football game in 73 years.”

In a matter of days, Lindsay, Brian and Brian’s father, Don, boarded a plane to Congo to go pick up their little girl. “We arrived in Kinshsa, Congo late on a Thursday and met our sweet Esther Mulumba the next morning,” Brian said.

They did face some difficulties involving language barriers and government issues that caused them to stay in Congo longer than expected. Morris, though, got permission to leave by himself. “I was able to get back to Shawnee three days before the historic OBU Football home-opener, and thankfully was able to experience the excitement and energy firsthand.”

Lindsay, however, ended up staying more than three weeks until finally receiving permission to leave the country with Esther. They both arrived in Oklahoma City around 11:30 p.m. on Friday, Sept. 6, greeted by many family and friends.

The adjustment process has been better than imagined, Morris said. The fact that Esther does not speak English has created some difficulty with an obvious language barrier. “It is interesting trying to parent a four-year-old through hand motions and pointing,” he said. “Esther is a very happy, smart little girl who has embraced her new family, new friends and surroundings. She loves giving hugs and kisses, helping around the house, playing with her dolls and changing her outfits several times a day. She has even attended her first OBU football game, Shawnee High School football game and is playing YMCA soccer.”

Morris also has a word of encouragement for those considering adoption. “Despite the fears, uncertainties, the emotional and financial sacrifices and what family and friends might say, God’s children are worth it,” he said. “Every child deserves to be loved and have a chance to have a family.”

Hopefully, as far as others following the Morris family’s example of adoption, this may only be the beginning.