Vocational evangelists get SEC off to a roaring start 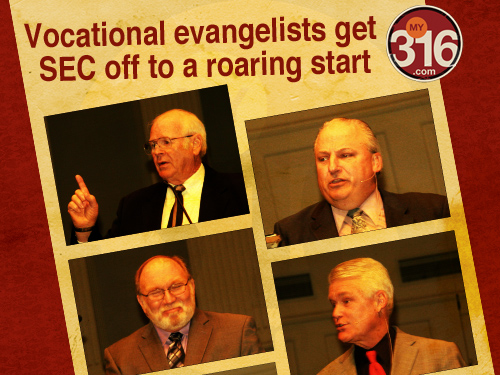 The church is in trouble, noted several evangelists during the opening session of the State Evangelism Conference led by Oklahoma’s vocational evangelists Jan. 30.

Preaching at Oklahoma City, Southern Hills, Bailey said there are causes for the problem, and one is that “we don’t have power anymore.”

“Remember revivals when people were weeping, trying to get their lives right,” he recalled. “There was power. We don’t have the foundation today, when many gather to eat donuts, drink coffee and listen to a guy on the screen preach. The church is to invade the world, but tragically, the world has invaded the church.”
He also pointed out the lack of influence of the church.

“It makes me sick the way the world kicks around the church,” he observed. “Ministers are committing adultery, ministers’ wives are running off with other women. The world is laughing at us.”

He added that “we aren’t persuading people any more.”

“There are people seeking the Lord, but they look at the church and are ashamed at what they see,” he noted. “Our hearts are cold and dead. God has to reach inside and move us again. We need to rekindle our hearts, excite our spirits.”

Steve Cody, evangelist from Lenapah, said he believes one of the reasons the church is in trouble is that “we’ve failed to make disciples.”

“The deep burden on my heart is what happens to people after they are saved,” he admitted. “We have more unsaved people today than in the history of our country, and we have more biblically ignorant people.”

Cody pointed out that it is a biblical command to train and teach people the truth.

“It may not be politically correct, but it is biblically correct,” he said. “People want to hear the truth, so why aren’t we telling people they must be born again. We can’t be ashamed of Jesus. We have to rightly divide the Word of truth.”

John Croy, Duncan evangelist, said as we think about discipling people, we need to realize who Jesus is.
“Can you imagine what our lives would be like if we spent our time with Jesus?” he questioned. “Jesus saved me, and I know I can do all things through Him. Even though we have to walk through the valley sometimes, we can have peace and comfort through Jesus.”

He said what the world is missing is Jesus.

“This is a dying world,” he observed. “As Christians, we have to do all we can to help people through Jesus. No matter what is in your life, you can do all things through Jesus.”

Craig Hobbs, evangelist from Haskell and president of the Oklahoma Conference of Southern Baptist Evangelists, told the audience that the devil wants to stop us from doing godly things.

“But what will keep us going is faith, acting on what we say we believe,” he pointed out. “It should be our desire to please God, and that is impossible without faith.”

He noted that if anything is going to happen in your life or in your church, it is by faith in the One who can make it happen.

“Nothing can stop us when we are acting in faith,” he declared. “God doesn’t want you to be oppressed by the enemy. When God gives you victory, He gives total victory.”