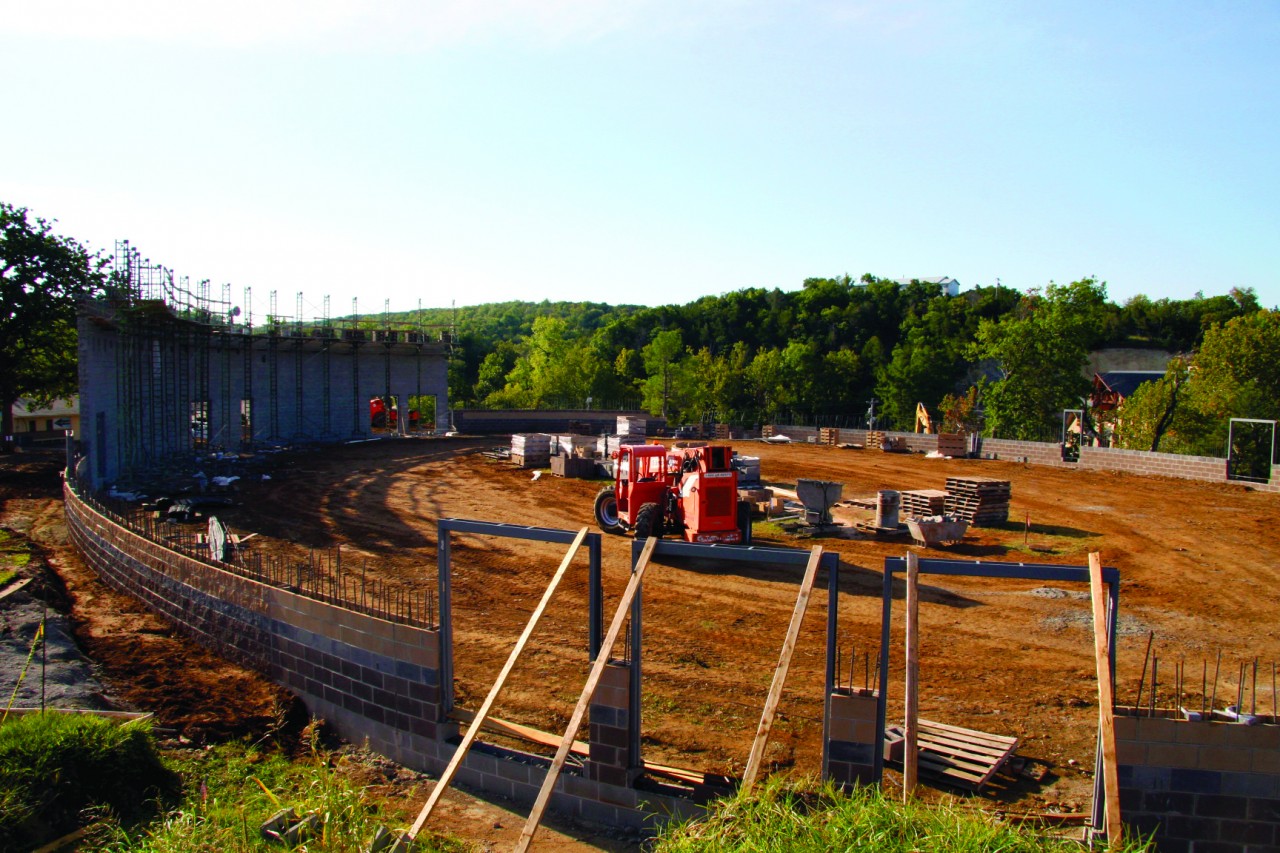 Construction of the Mathena Family Event Center in October

DAVIS—The year 2017 will mark the 100th anniversary of Falls Creek. Known throughout the world, Falls Creek holds a prime place among Oklahoma Baptists. The vision that God gave to J.B. Rounds and W.D. Moorer in 1917 has blossomed into a reality that can be attributed only to God. Their vision was for a place where young people could come to learn about Baptist distinctives, about missionary service, and to understand who they were in Jesus Christ.

From that original vision has come the world’s largest Christian youth encampment, one that has been the site God has used to call thousands of people into full-time ministry.

“From the first meeting 97 years ago to today, Falls Creek has continued to have a rich spiritual history and has reached the world over,” said Anthony Jordan, Baptist General Convention of Oklahoma (BGCO) executive director-treasurer.

“Fifty-one thousand. 17,000. 8,000. Just let those numbers sink in a moment,” said Marty Harkey, BGCO chief development officer. “Since 2007 alone, Falls Creek has touched an amazing number of lives. More people have surrendered their lives to missions at Falls Creek than any other place on the face of the Earth.”

As the BGCO Falls Creek Building Committee met, they began to seek the face of God for a picture of what Falls Creek needed to look like today. Out of those meetings, the Centennial Capital Campaign was developed, which includes the Jordan Welcome Center, the Thompson Family Lodge and the Mathena Family Event Center.

Because of the generosity of the Mathena family, the Thompson family and the Downing family, a majority of the funding is in place for the $12.96 million project. What remains is $4.7 million to complete these three projects and pay off the remaining debt from the R.A. Young Tabernacle.

Harkey presented a report at the 2014 BGCO Annual Meeting about the Falls Creek Centennial Capital Campaign. He said, “To date, we have raised almost $1.6 million toward the $4.7 million goal, leaving $1.9 million on the original tabernacle debt. But the great news is that every dollar you give today toward the campaign will be matched by the Downing matching fund, doubling your gift.” 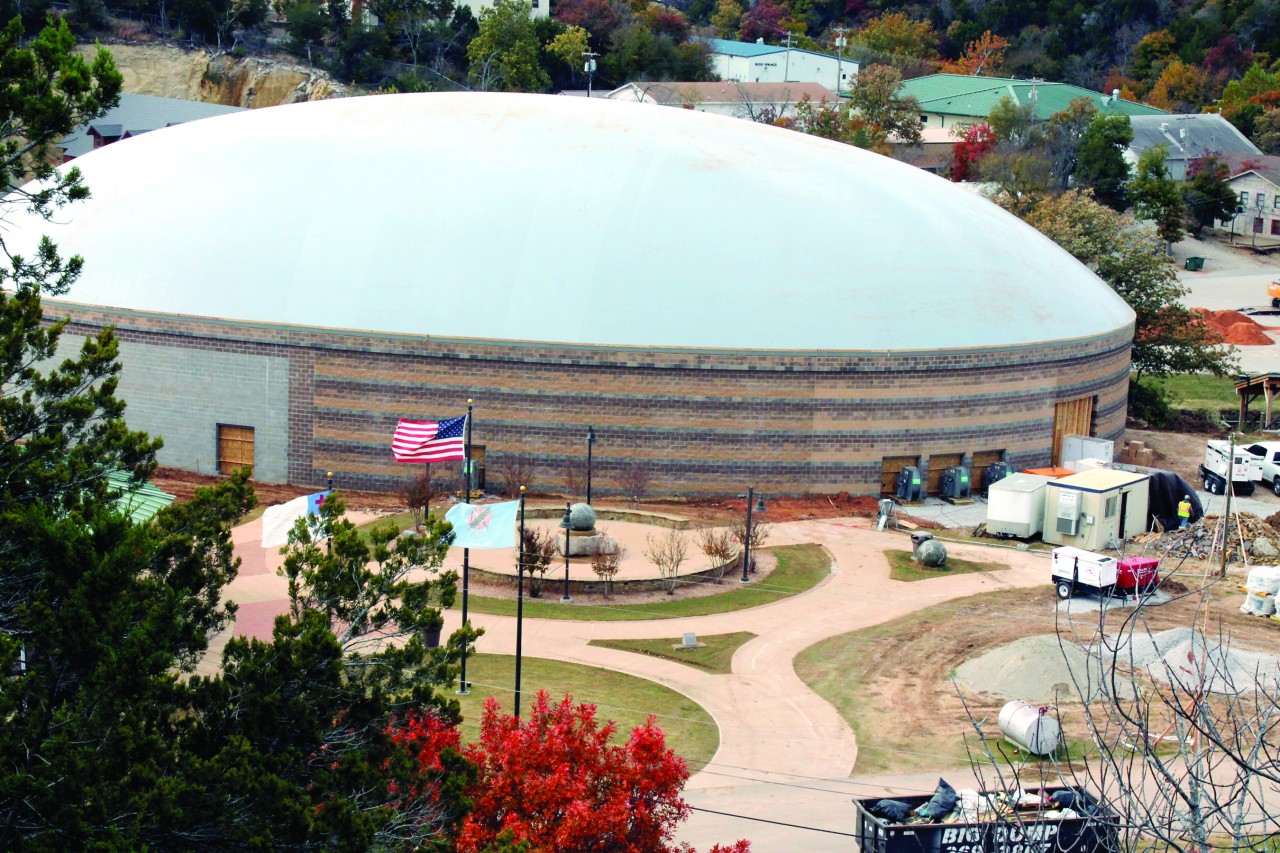 “The Mathena Family Event Center is a 35,000-square-foot, tornado-proof facility. Joined with the Thompson Family Lodge and the Jordan Welcome Center, the new facilities are designed for the future, and ideally suited for hosting mid-sized and large groups,” said Phillips.

• Eight weeks of youth camp during the summer

• Many others who utilize the Watson Challenge Course for Team Building

Falls Creek is not just a summer camp; it is a year-round conference center and hosts more than 80,000 people annually. With the expansion due to the Centennial Campaign, there is the potential to see more than 120,000 people every year. 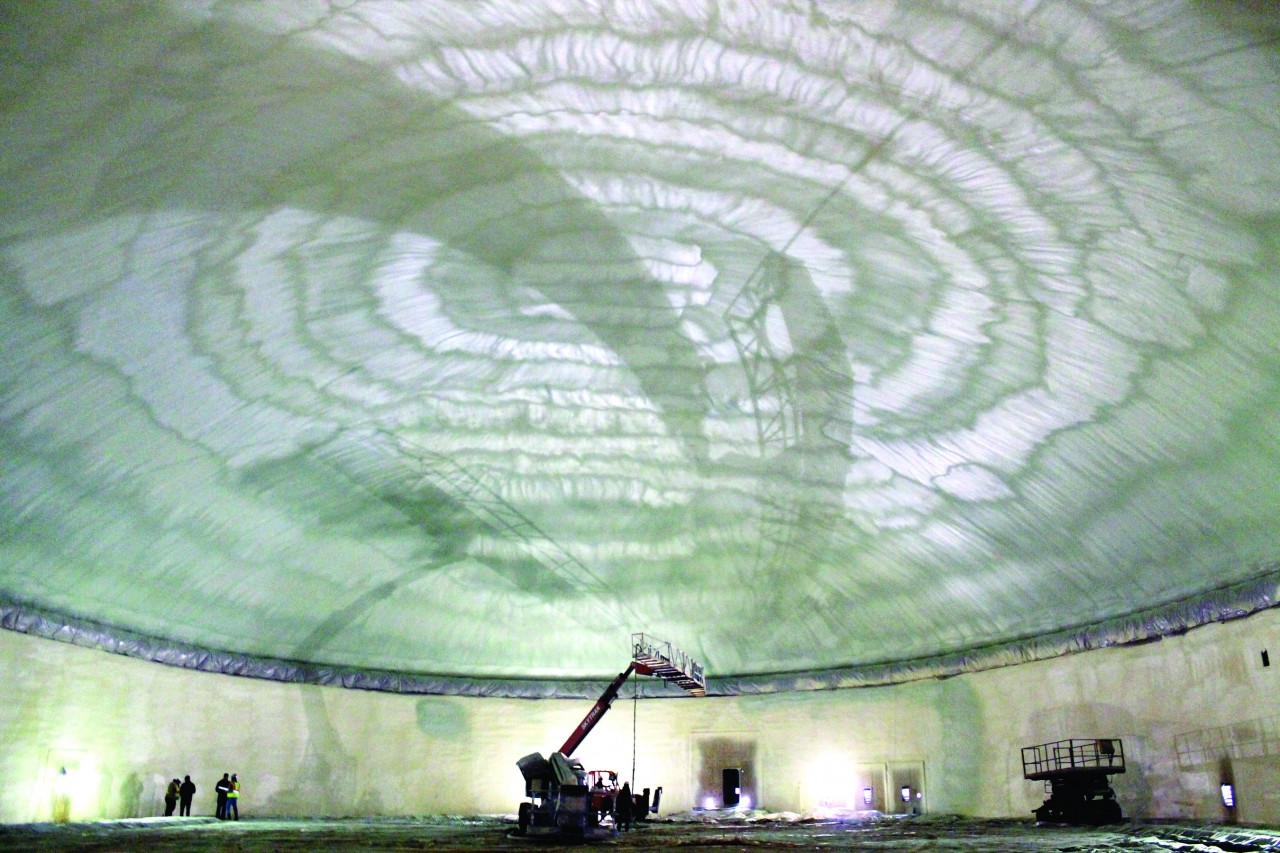 Construction workers spray the interior lining of the dome, which is a unique feature of the EF5 tornado-proof structure.

“The Centennial Campaign is not just about constructing buildings, it is really about the people who are reached for the Savior in those buildings,” said Harkey.

“These mid-sized facilities will add space for churches to use for marriage enrichment, for family retreats, for worship and will also house a new enlarged food service facility,” said Phillips. “The more we can use these facilities, the more people we can reach.”

Jordan believes this vision is not brand-new, but a continuation of the founding vision. “It’s actually the same vision that was given to Rounds and Moorer, and that is the same vision that was given to the disciples when Jesus said, ‘Go and make disciples.’ It is exciting that God’s vision to reach the world is still active today at Falls Creek,” he said. “I am amazed to see how far God has brought us since He first gave the vision of Falls Creek to J.B. Rounds and W.D. Moorer in 1917. You can see where He is leading us today with the Centennial Campaign. A gift to the Centennial Campaign means that many generations will have the opportunity to respond to the call of God at Falls Creek as they have since 1917. Join me and thousands of others who have given so that Falls Creek continues to be the place that will reach people for God until Jesus comes.”