Tulsa gets a ‘New Beginning’ 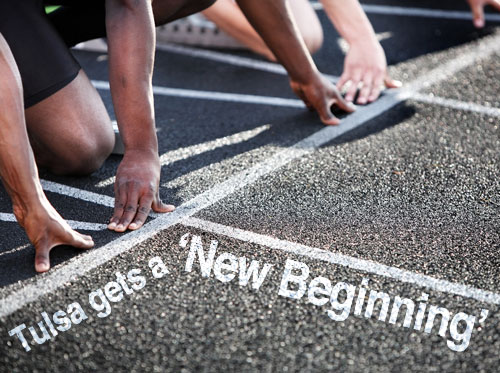 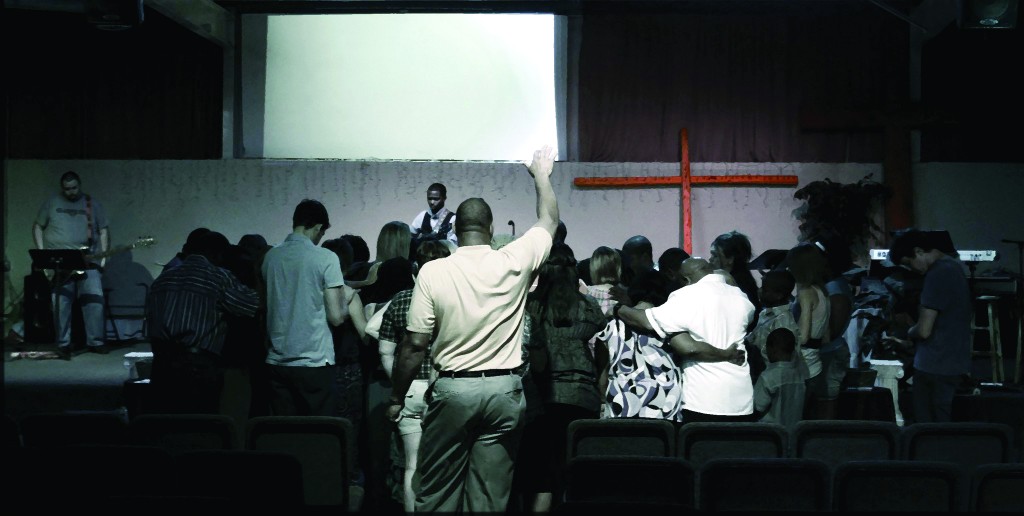 Pastor K.J. Jackson and his members are breaking down barriers and taking an active role in serving the Tulsa community. (Photo: provided)

TULSA—Although K.J. Jackson was born, raised, educated and employed in California, it was pretty obvious God had a work for him to do in Oklahoma—and connections to bring him here.

After graduating from the University of San Diego, where he met his wife, who was from Tulsa, Jackson and Kimberly settled in San Luis Obispo, where Jackson was employed in sales and marketing and was bivocational children/family pastor at First Church there before becoming full-time at the church. The couple had lived in the California coastal city for seven years when Jackson’s mother-in-law suffered six strokes in one month. Knowing she needed some extra care, they encouraged her to move to California, but she wouldn’t budge from her hometown, so the Jacksons relocated to Tulsa to help take care of her.

“She was fine the first two years we were here, but she contracted colon cancer after a few months and died in 2006,” Jackson said.

After moving from California, the Jacksons had joined Sand Springs, Cornerstone, where he was employed as children’s minister. While there, Jackson ventured on a church planting vision tour of the Tulsa area with several others from across the nation.

“We visited several areas, including Broken Arrow, Bixby and Sand Springs, where there was great excitement among the tour members, but when we stopped in North Tulsa, there was just silence,” he recalled. “It was such a different area.”

Jackson said he later discovered Tulsa is one of the most segregated cities in the nation.

“I started investigating, and found that North Tulsa is 97-98 percent black,” he said. “Then I read that the largest incident of racial violence occurred in Tulsa in 1921. The Greenwood District, known as Black Wall Street and the wealthiest black community in the U.S., was burned to the ground.”

The area was just north of the Frisco train tracks that cut a racial border through the city. Today, the city is still divided by those same railroad tracks. Doing further background, Jackson discovered his great-grandmother, Juanita Delores Arnold, was an educator, civil rights activist and survivor of the 1921 race riot.

Jackson said what he learned bothered him tremendously.

“I grew up with all nationalities,” he noted. “My wife is white, our children are biracial. I didn’t understand the segregation.” 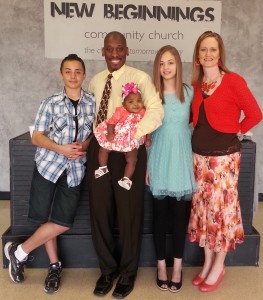 Pastor K.J. Jackson with is wife Kimberly and their three children Jazmyn, Jaelyn, and Janae.

Jackson said he talked to his pastor about the disturbing facts he had discovered, and his pastor said, “Maybe God is calling you to do something.”

“He sent me to a Baptist General Convention of Oklahoma (BGCO church planting basic training conference,” Jackson said. “I wasn’t looking to plant a church, and I fought the whole process.”

But while at the conference, which was held in a hotel, Jackson and his wife walked in on a multi-ethnic worship service at the site.

“I knew in my heart I wanted to see multi-ethnic ministry, but I had never seen it until then,” he disclosed. “God breathed a vision into me, and instantly, I got it. I knew who we would be. Tulsa needed a New Beginning.”

While looking for a place to locate the new church, Jackson, who got lost looking for Tulsa, Phoenix Avenue, stumbled upon a warehouse that had been abandoned for eight years and was in disrepair.

“I sensed this was the place,” he acknowledged. “God told me to prayerwalk the building, and as I did, Josh. 1:3 came to mind—‘I have given you every place where the sole of your foot treads.’”

As he walked around the building, which the owners wanted $500,000 for, Jackson noticed a phone number etched in the dirt on a window. The number was answered by the wife of the owner.

“I told her about our vision for planting a church there and was encouraged when she said her husband had a heart for church planting,” Jackson remembered. “But when I talked to him, and asked him if he could come down on the price, he said no, that if God told me this was the place, I should trust Him for the money.”

It turned out that the owner of the building knew Jackson’s father-in-law, who had introduced the owner to his wife. But even with that connection, he still would not negotiate on the price.

As Jackson continued to prepare to start the new work with a Bible study, he found an abandoned community center two miles down the road,  and worked it out with city officials to meet there.

During his quiet time the week before Bible studies were to begin, God impressed upon Jackson to call the owner of the building again.

“They still wouldn’t negotiate, but the wife said she understood the need to get into the building so people could have a vision of what they were being asked to contribute to.

“They agreed to give us a 30-day lease with the stipulation that at the end of the 30 days, we bring them $50,000. Then they would sell us the building and carry the note,” Jackson explained. “In the meantime, we got an email from the city saying there was a gas leak in the community building, and we couldn’t meet there. So we started meeting in the warehouse and raising money.”

Jackson, whose full first name, Kuyanga, is a combination of three Swahili words meaning “to build, be strong and be number one,” said on Saturday, two days before the end of the 30 days, they had done everything possible to raise the money, and were still $11,291 and some change short.

“By Sunday, we had done all we could and were still short of the money we needed the next day,” he said. “On Monday, I got a call from the church we served in California, and unknown to us, they had taken an offering for us. It amounted to $11,291 and some change—seven cents more than we needed.”

Jackson said the church now owns about four acres, along with two buildings on the land, which appraise for $1.5 million, and owes $300,000 on the note.

The epitome of what a church should be, Tulsa, New Beginnings, established in 2006, has started three new works this year, in North Tulsa, Broken Arrow and Muskogee. It also started a church in Sand Springs two years ago, has a Hispanic congregation and has been helping a church in Lawton for six years. Jackson’s vision of a multi-ethnic church is seen in the New Beginnings congregation, which is about 49 percent Caucasian, 47 percent African-American, with a few Hispanics and Native Americans.

“The best form of evangelism is new works,” Jackson emphasized. And, the new church has worked closely with the BGCO church planting group.

While investing in new church starts, the New Beginnings congregation is actively involved in the community.

“We operate under a non-profit, 501c3, ministry called TOUCH—Tulsans Operating in Unity Creating Hope,” Jackson explained. “A lot of churches in this area have started and failed. The community doesn’t have a lot of trust in church, but as a non-profit, we can address community needs.

Jackson noted that schools in the area are under performing, and to get to families, the church had to go through schools.

TOUCH operates a federally- funded after-school program, medical clinic, social services in six apartment complexes, counseling, cooking classes and GED classes, as well as a number of other ministries. Through Jackson’s work, New Beginnings has been given $1 million in grants during the last six years.

Jackson underscored that Sunday mornings (Sunday School is conducted on Wednesday nights at the church) are a by-product of what goes on Monday through Saturday.

“Stuff isn’t happening in this building,” he exclaimed. “Members are in schools, apartment complexes, penetrating the workplace. There are opportunities to sow seeds of the Gospel in all these places. Sundays are a celebration of what has happened during the week.”

Jackson said the BGCO partnered with Sand Springs, Cornerstone to sponsor New Beginnings for three years, paying his salary for one year and half of his salary for two years.

“The best thing you can do for church planters is make sure they don’t have ‘di-vision,’” he divulged. “We were self-sustaining after three years because I had a focus for three years. I didn’t have to worry about any job except the church.”

“I like us to be a little lean,” he said. He said that keeps everyone working, stating that 150 is a good number for them, but if sending out people to start other churches gets them down to 100, that’s OK, too.

“Ninety-five percent of our congregation is from new converts or those who have not been in church in the last 5-10 years,” he pointed out. “That’s what a new work is supposed to do.”