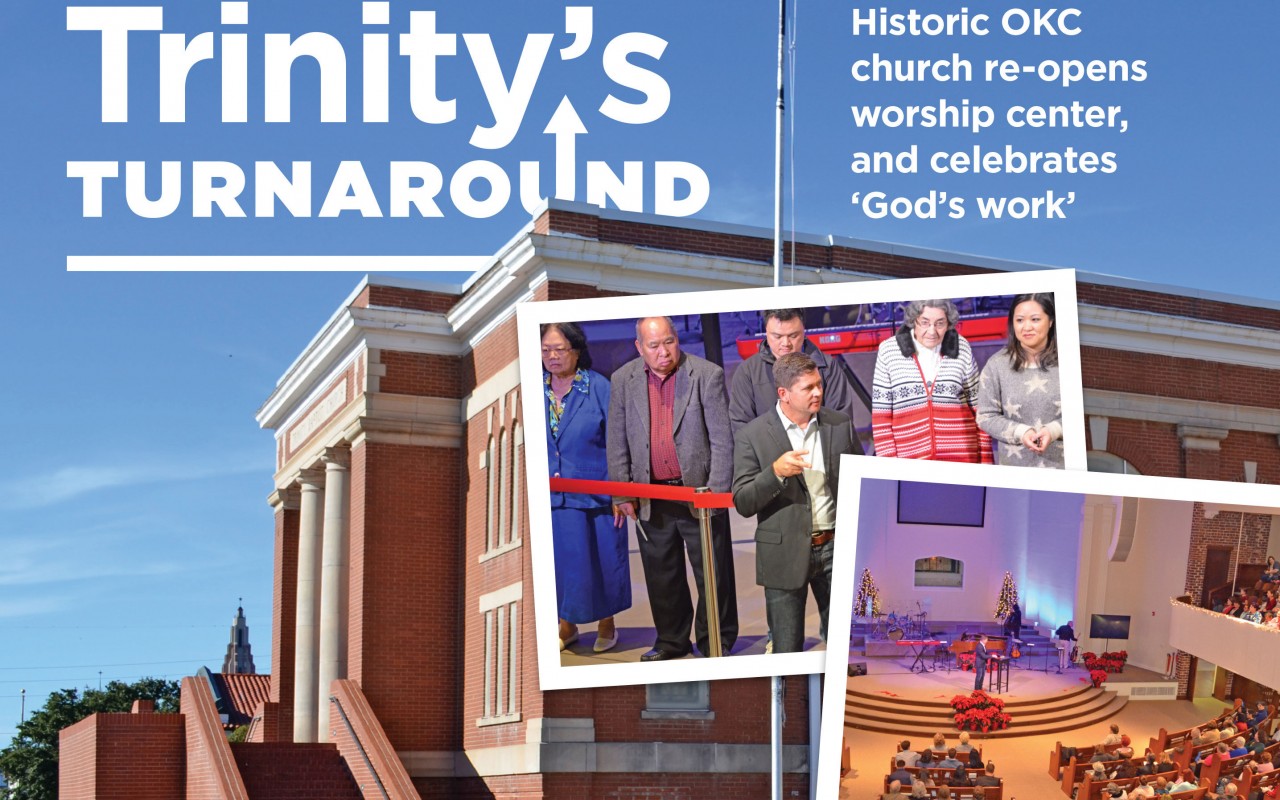 The theme was “Come & See,” and many did just that when Oklahoma City, Trinity hosted a “Grand Re-opening” on Dec. 6 to celebrate its restored worship center that has been unusable for approximately six years. Pastor Tobin Jackson led the resurgence of the sanctuary that was damaged by a 2009 ice storm, but he credits the faithful support of approximately 30 church members who remained at Oklahoma City, Trinity in spite of facing disbandment three years ago.

“On August 5, 2012, this remnant behind me made the decision based upon prayer, fasting and seeking the Lord that they would not leave,” Jackson said during this special Sunday worship service with many of those faithful members standing on stage with him to participate in a ceremonial ribbon cutting. “God told them to stay and trust Him. This is one of the most beautiful stories I could ever imagine, and here I am the pastor. God is so good to us.”

Near the end of Jackson’s first year at Oklahoma City, Trinity, a settlement was made that allowed the church to progress toward the opportunity to praise God in His sanctuary.

The Oklahoman reported on Trinity’s process, stating it took several months for Jackson and church members to restore this sanctuary that contains a fully suspended balcony, nine stained-glass windows and other special architectural design features and holds a capacity near 825. The Oklahoman reported the church was established in 1911.

Jackson said they were doing final touches until 4:30 a.m. the day of the service. He thanked John Stowe of Covenant Restorations, whose company, Jackson said, was involved in the restoration process since “Day One” after the ice storm affected the building. “John, your construction company is absolutely awesome,” Jackson said.

Many others Jackson thanked including the audio/visual team and the company that installed the sound system and video equipment. He also showed appreciation to the attorneys who supported the church and helped through the four and a half years that resulted in the settlement.

“I am amazed,” he said, when he looked around the sanctuary that was filled with people on the ground floor and approximately two-thirds full in the balcony. “I told Kyle (Duncan, associate pastor) that we might be halfway full. I underestimated you. I see friends and family who are here today. This is beautiful. Thank you for being here.”

Many representatives of the Baptist General Convention of Oklahoma, the Baptist Foundation, Oklahoma Baptist Homes for Children and other affiliates, as well as members of supporting churches, were in attendance.

The service opened with Jim Bellah reading Scripture and Jim Matthews voicing prayer. Barbara Bell sang “Great is Thy Faithfulness,” and a video testimony from Charlotte Bellah was shown.

“Trinity is home. Trinity is family. Trinity is a very unique congregation,” said Bellah who has been a member of the church for 41 years. “We are made up of all kinds of socioeconomic levels, different nationalities; it just doesn’t matter. I have had several people ask me about lots of people leaving and if I was leaving, and I said, ‘No. Number one, I don’t believe the Lord has asked us to leave. Number two, I’m not going to leave… I’m going to stick around. I’m going to see what the Lord’s going to do with Trinity.’

“I am just thrilled to get back over here,” Bellah continued about meeting once again in the sanctuary. “This is going to be more like home. I think the fact that Trinity is still here, a functioning church, we’ll see more people come.”

Jackson’s sermon was titled “The God Who Sees,” taken from Gen. 16, about Abram and Sarai following their own plans to fulfill God’s covenant of making a great nation. Jackson emphasized the words of Sarai’s servant Hagar who named the Lord “The God Who Sees” in verse 13.

“I hope you can understand that God sees everything because that’s what Hagar discovered,” said Jackson. “The revelation of God often occurs after we’ve gone through a situation. God reveals Himself to us, but we see His hand at the end of a long journey. And you’ve probably experienced this or somebody mentioned this to you that when you look back, you can see the tracing of God’s hand.

“Trinity has a second opportunity. It’s a rebirth, a revitalization of a great church. And what we find hard to understand sometimes is that we want to know the whole story in the middle of the story. And that confuses us, frustrates us. And in the middle of God’s story we try to get our hands all in it… try to force it and get frustrated if we are not careful. God’s plans need to completely unfold.”

“Please don’t stop praying for this great people,” Jackson said at the conclusion of the service. “There’s much yet to be done. This is a launching pad, not a finishing post. We just have a place to do it in. What a joyous occasion. Don’t let this be the only time you come and share with us. We love you, and God is so good.”