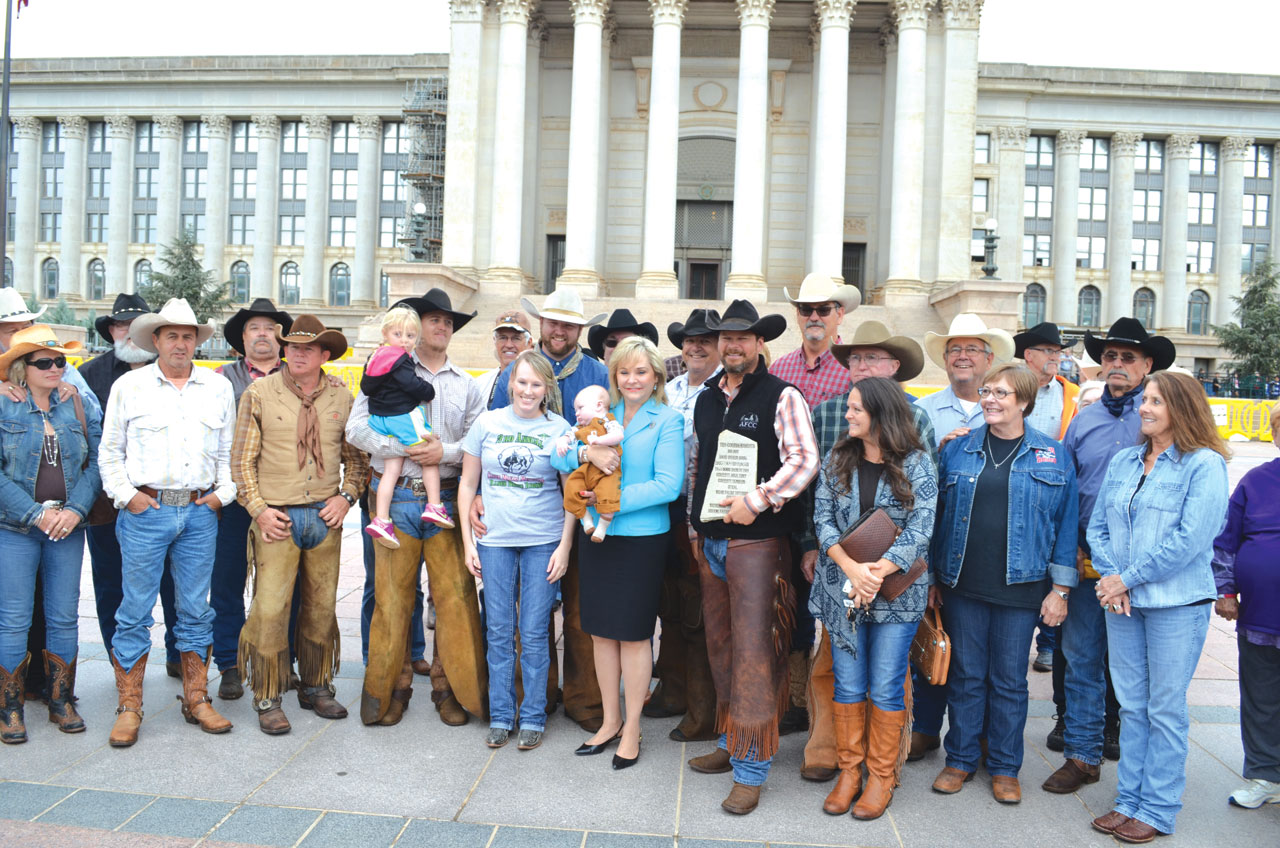 For four days, they rode horses 109 miles to the State Capitol Building in Oklahoma City, demonstrating what they believe was a stand for God and His teachings.

John Riggs, pastor of Texoma Cowboy Church in Wichita Falls, Texas, led members of his church on a horse ride to deliver a granite tablet of the Ten Commandments. The pastor met Oklahoma Gov. Mary Fallin, on Fri., Oct. 23, near the south entrance of the Capitol Building and offered her the tablet as a demonstration of disappointment with the recent removal of the Ten Commandments monument from Capitol grounds because of a Supreme Court ruling.

Riggs said he found out about the monument removal while he was in Alabama, preaching a revival.

“It broke my heart,” he said. “To realize where we are as a nation and where we are headed, and the Church in America has become apathetic. We’ve been silent.”

He shared how he felt about the monument removal with a member of his church, saying “We ought to just saddle up and ride up there and carry the Ten Commandments.”

The church member took him literally and had the granite tablet of the Ten Commandments made.

Riggs said, “(The church member) pretty much ‘held me to the wall.’ Once it was made we had to go, and we announced it on a Sunday morning, inviting whoever wanted to go. By Tuesday morning, we started heading this way.”

The “Commandment Riders” followed mostly the route of Interstate 44 from Wichita Falls. Averaging about 20 miles a day, Riggs said when it became dark they would roll their bedrolls out and stay wherever they were for the night. He also said those who they saw along the way were happy for what the riders were doing.

“It’s unbelievable the amount of support we’ve received, through every community we rode, along the highways, people stopping, people praying with us,” he said. “I can’t tell you how many people said they were so thankful and appreciative of what we were standing for.”

Gaining the attention of onlookers, Riggs hopes their journey will inspire people, especially Christians to “stand up and speak up” for God’s truth.

“We are so blessed to be in a country to have the freedoms we have, but we desperately need revival in the Church and in America today,” he said. “This has been one of my main messages. We have been praying for revival that God would move in the hearts of people and prepare our hearts to receive it. I firmly believe the only hope that America has is if this nation turns back to God. But it’s going to start with the Church. The Church needs to repent. It needs to humble itself, get before God and turn from its ways.”

“I told the pastor and the people from Texas how much we appreciate them coming to Oklahoma, riding their horses and delivering this Ten Commandments granite piece to Oklahoma to stand with us in our beliefs and in our morals and values,” Fallin said when meeting with the media. “I will have this in my office, so it will be at the Capitol.”

The Governor and the riders ended their meeting with a time of prayer and a photo shoot.

“God give you peace and safety as you ride back home,” Fallin told Riggs and his fellow cowboys before they mounted to head back south.