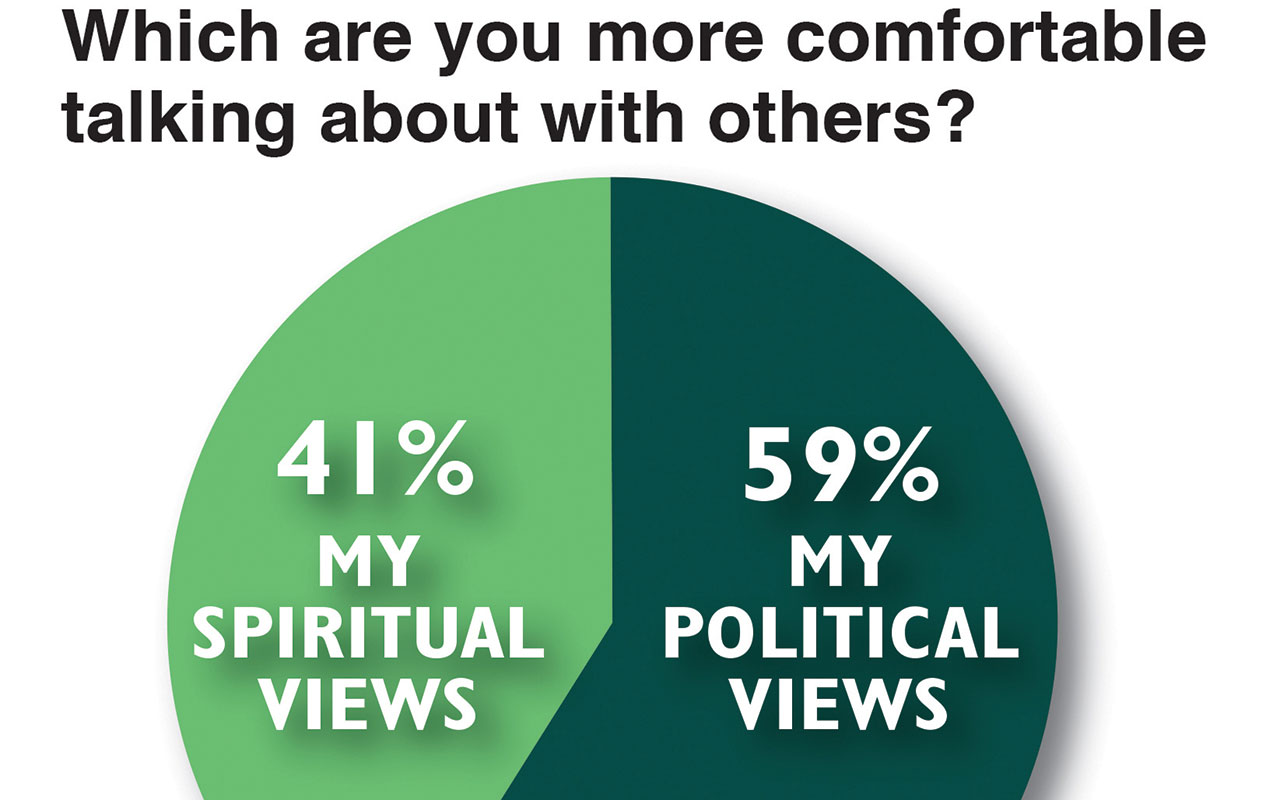 NASHVILLE (BP)—Politics trumps God for most Americans when it comes to conversations with their friends, a new study shows.

Six in 10 Americans are more comfortable talking about politics than their spiritual beliefs. And most say they aren’t interested in having more spiritual conversations.

By contrast, evangelical Christians prefer talking about God over politics by a 2-to-1 margin.

Those are among the findings of an online survey of 1,004 Americans about their views on spirituality and politics from LifeWay Research.

Scott McConnell, executive director of LifeWay Research, said Americans like to talk about both politics and religion, which are sometimes considered off limits in polite conversation. But they often prefer one to the other.

“People tend to discuss the things that matter most to them,” he said. “For evangelicals, that is their faith.”

As part of the survey, researchers compared how often Americans talk to others about politics to the number of times they talk about spirituality.

By contrast, fewer than half (44 percent) had three or more spiritual conversations in the same time frame. Twenty-two percent had no conversations about spirituality.

Overall, 6 in 10 Americans (59 percent) say they’re more comfortable discussing their political views than their spiritual beliefs. But there are distinctions among certain groups.

Most Americans also say they have about as many conversations about spirituality as they can handle.

About half (51 percent) say they have “just the right amount” of discussions on spiritual beliefs. A quarter (23 percent) want fewer spiritual discussions. Only 1 in 5 wants more. Six percent aren’t sure.

Hispanics (38 percent), those 18 to 35 (35 percent), and those who live in the West (30 percent) are more likely to say they have spiritual conversations “more often than I would like.”

Those with evangelical beliefs (32 percent), those 55 and over (26 percent), and those in the South (24 percent) are more likely to say they have such conversations “less often than I would like.”

Those findings don’t surprise McConnell. Sharing one’s faith in order to convert others is a core evangelical conviction.

Still, he said, those with evangelical beliefs may need to listen more during a spiritual conversation.

“If you don’t care what your neighbors believe, chances are they won’t listen to what you have to say,” he said.

Philip Nation agrees. Nation helps manage Bible Studies for Life, which sponsored the survey. Evangelicals who want to share their faith may need to listen first, he said.

“Evangelicals too often only want to lecture our neighbors,” he said. “We need to learn the needs and worldview of our neighbors so we can effectively discuss the Gospel.”

—Few Americans (17 percent) say they are most comfortable sharing their views on social media. Three-quarters would rather discuss their beliefs one-on-one (40 percent) or in a small group (33 percent). Six percent would prefer not to share their views.

—Most churchgoers (72 percent) say they have the right amount of training to help them share their faith.

—About half of churchgoers (49 percent) say their church treats sharing the Gospel as extremely urgent (24 percent) or urgent (25 percent).

Overall, McConnell believes Americans are open to talking about faith.

Few seem turned off by spiritual conversations, he said, especially if those conversations are in person and are respectful.

“If your friends are tired of arguing about politics on Facebook, trying asking them about God,” he said.