by Dana Williamson and Brian Hobbs
PHOENIX, Ariz.—Approximately 150 Messengers from Oklahoma registered at the annual meeting of the Southern Baptist Convention June 14-15. 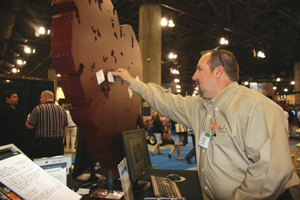 For the first time in decades, messenger registration totaled less than 5,000. SBC registration reached at all-time high in 1985 with more than 45,000 in Dallas.

The two-day meeting, which featured reports from various SBC entities and seminaries, included select Oklahomans on the schedule of events.

Former Oklahoma pastor Tom Elliff delivered a report on behalf of the International Mission Board, whose presidency he recently took over. The IMB assignment, which was approved by messengers, has been revised to allow the mission-sending organization to “provide specialized, defined and agreed upon assistance to the North American Mission Board in assisting churches to reach unreached and underserved people groups within the United States and Canada.” The former ministry assignment focused IMB work outside the U.S. and Canada. 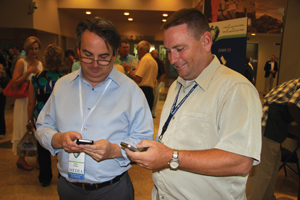 In a short speech before the commissioning of international missionaries, Elliff said everything in the convention so far has been aimed at this moment.

“We are together missionaries,” he said. “Aren’t you glad we are operating together.”

Elliff asked pastors to lead their churches to do everything possible to reach the 3,800 unengaged, unreached people groups. 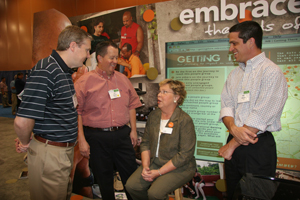 “Missions can’t be just we collectively, but you and I must be Southern Baptist missionaries,” Elliff said.
Elliff’s report ended with a special prayer for Elliff and his wife, Jeannie.

Emerson Falls, pastor of Oklahoma City, Glorieta, delivered a prayer from the podium Tuesday afternoon, petitioning God to fall afresh on the people of the SBC. Falls, president of the Fellowship of Native American Christians (FoNAC), also spoke to FoNAC about the need for an executive director and regional liaison network with Indian churches in state conventions during the group’s meeting June 13 prior to the SBC annual meeting.

Atlanta-area pastor Bryant Wright was elected to a second term as president of the SBC, defeating California pastor Wiley Drake by a vote of 2,274-102.

Throughout the week, other Oklahoma Baptists appeared on the platform. Jeff Moore, pastor of Altus, First, participated in the motions proceedings on Tuesday, and Dennis Dawson, associate pastor of Lawton, First, appeared with the Committee on Committees report on Wednesday morning. Also, former Baptist Messenger editor John Yeats took part in the proceedings, as recording secretary and also took over the duties of registration secretary because of the illness of James H. Wells.

Connected to the annual meeting were several luncheons, programs and special events, including the Ministers’ Wives’ Luncheon and an Oklahoma Baptist University event for alumni and pastors at an Arizona Diamondbacks Major League Baseball game Tuesday evening, June 14.

“This outing at the ballgame is a great way for pastors to feel even more connected with OBU, and I am glad for the fellowship,” said Dawson. “The annual meeting this year has been an encouragement, and from my perspective, shows how Southern Baptists can collaborate well.”

Messengers adopted seven resolutions, including a controversial one on immigration and the Gospel.

The resolution on immigration and the Gospel, which calls on Southern Baptists to be the presence of Christ, in both proclamation and ministry, to all persons, regardless of country of origin or immigration status, also declares that any form of nativism, mistreatment or exploitation is inconsistent with the Gospel of Jesus Christ.

It also resolves asking “our governing authorities to prioritize efforts to secure the borders and to hold businesses accountable for hiring practices as they relate to immigration status.”

The paragraph that created controversy stated, “That we ask our governing authorities to implement, with the borders secured, a just and compassionate path to legal status, with appropriate restitutionary measures, for those undocumented immigrants already living in our country,”

A messenger from Tucson asked that that paragraph be deleted from the resolution, stating that if this phrase was included, it would be rewarding people who have broken the law.

The resolution committee countered with the reasoning that this is a realistic and biblical approach to immigration—that we should not be concerned with their legal status, but with their Gospel status.

After a show of ballots to accept or reject the amendment was too close to call, messengers voted by ballot.
Also passed were six other resolutions on religious liberty in a global society; protecting the Defense of Marriage Act; the reality of Hell; corporate prayer and repentance; civil public discourse and appreciation to those God used in Phoenix to bring about the annual meeting.

The resolution on religious liberty encouraged Southern Baptists to pray for “our brothers and sisters around the world who are persecuted, imprisoned or facing execution for their testimony of faith in Jesus.

The Defense of Marriage Act resolution asked Southern Baptists to call on President Obama to direct the U.S. Department of Justice to follow through on its constitutional responsibility to defend vigorously the Defense of Marriage Act against all legal challenges with the full power of its office, and called on the U.S. Congress to pass and the states to ratify a constitutional amendment defining marriage as exclusively between one man and one woman.

Messengers also passed a resolution on the reality of Hell, which was recently called into question by emergent church leader Rob Bell. Quoting the Bible and The Baptist Faith and Message, messengers affirmed that our Holy God must judge the unrepentant consigning them to Hell.

This stark reality, however, should serve as a springboard to love and reach the lost, said the resolutions committee. A special time of prayer was held, calling on God to help Southern Baptists see and minister to the lost so they will not suffer eternally.

Corporate prayer and repentance, which were heavily emphasized in the Pastors’ Conference, were the subject of another resolution. “We call on all Southern Baptist churches to renew their first-love devotion to Jesus Christ through full confession of and repentance from all revealed sin,” read the resolution. The resolution further encouraged Southern Baptists to pursue a life of genuine repentance, Kingdom-focused prayer times for sweeping revival and spiritual awakening, and consistent prayer for specific lost people, missions and ministry.

The resolution on civil public discourse called on Southern Baptists to denounce the speech or activities of any individual or group that brings shame upon the name of Christ and His Gospel, while urging Southern Baptists to continue to speak biblically and authoritatively with conviction, kindness and gentleness.

Dana Williamson is associate editor of the Baptist Messenger. Brian Hobbs is communications director for the Baptist General Convention of Oklahoma.