Spencer’s baptism just one of many amazing stories at Coweta, Community

COWETA—This is Spencer Shamas’ story. But it’s also the story of a church plant in a small Oklahoma town that is making a big impact.

Shamas was born in Okmulgee, where he grew up attending the Lutheran church, playing sports and was a curious soul trying to understand life. A deep thinker, he was always inquisitive, wondering how things worked and what might be beneficial to him. For example, at age 14, he started smoking marijuana, but soon realized there was nothing advantageous to it and gave up the habit. After graduating in 2002 from the University of Oklahoma with a degree in geography, he became enthralled with science and studying the workings of telescopes and microscopes.

“But the more I learned, the more science became a barrier to me,” he admitted.

He moved to Pensacola, Fla., where he was employed by the Environmental Protection Agency, studying global warming. When that didn’t work out, he moved back to Oklahoma and was employed in his father’s law firm, and later created a business, Cardinal Land, which was integrated with the law firm.

Through all of this, there was something missing in Shamas’ life, and he turned to alcohol. And ironically, alcohol was the major factor in some of the most tragic events of Shamas’ life.

When he was 21, he and his 18-year-old brother, who was driving a pick-up, were struck by a drunk driver. Shamas survived, but his brother was killed, and Shamas grieves about the ordeal to this day.

As he continued to struggle with alcoholism, he was arrested for driving under the influence. His young son, now 16, was in the car with him. Shamas received a deferred sentence.

Finally aware of the problems alcohol was causing in his life, he joined Alcoholics Anonymous (AA) and was sober for three years. This is about the time he met Adam Mask, pastor of Coweta, Community.

“Spencer came to Celebrate Recovery at our church,” explained Mask.

But alcohol wasn’t finished wreaking havoc in Shamas’ life. On Dec. 1, 2012, Shamas was riding his motorcycle in his neighborhood when a woman, who later was found to be intoxicated, backed out of her driveway and hit him. He suffered a broken neck, shoulder, leg, torn ACL, road rash—and paralysis. He was transported to a facility in Denver, Colo., where he spent three months and was diagnosed a quadriplegic.

When he returned to Coweta, members of Community Church stepped in to help, and he occasionally attended church services. Men from the church came to his home to aid him with stretching exercises. Mask visited him, bringing audio sermons and praise songs.

Four years after the accident that paralyzed him, Shamas began to realize that all the prescription drugs he was taking—pills for 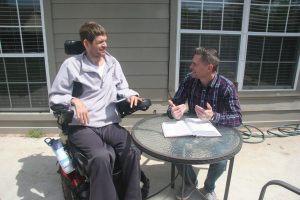 pain, anxiety, depression, etc.—were not doing him much good and were altering his thoughts.

“I’m now weening myself off these drugs,” he said. “They were making my life complicated. By being in tune with my body and thoughts, it helps me integrate and have a pure feeling. I don’t think pills are the answer. I’m trying to prioritize and make myself healthier. I’m getting strength and calmness from God.”

Unfortunately, God didn’t play a strategic role in Shamas’ life until March 19. That’s when he attended Community Church and was impressed to talk to Mask about his salvation.

Mask had preached that morning on the unity of the church. He gave the example of Moses holding up the rod as Joshua and his men went out to fight the army of Amalek, and how Aaron and Hur helped Moses hold up his hands when he became tired.

“This spoke to Spencer, because he is working on lifting his hands,” explained Mask. “I talked to him in the parking lot after the service, and he prayed to receive Christ.

Shamas was later baptized with three men helping him into the baptismal waters.

Shamas said as he was attending the Lutheran church as a child, he enjoyed singing, but he also did a lot of sleeping. He is now more in tune to God.

“I was burning a lot of energy and not making much progress,” Shamas said of the first years after his accident. “I’ve come out of a fog from taking pills, and now I try to pay attention to what makes me happy and brings joy to my heart.”

“He was trying things that were adding to his problems,” related Mask. “He’s simplifying his life—not looking to the world, but to God. Our identity is found in Christ, not circumstances.”

Mask added that Shamas says he wants to give back. “But he already is. His baptism inspired so many at church. A lady set her date for baptism after seeing Spencer baptized. It is exciting to see what God is doing in his life.”

And it is exciting to see what God is doing through Community Church, a church plant of Broken Arrow, First.

When the campus opened in 2011, the average attendance was 35, and by the time Mask came as interim pastor in January, 2015, attendance had grown to around 170. The average weekly attendance so far this year is 243.

Small group attendance has jumped from an average of 44 to 77 each week. Although, Mask said, detailed records were not kept during the first years of the church’s operation, for the fiscal years of 2014-15, 32 people were baptized, and from Oct. 2015-Sept. 2016, the church recorded 44 baptisms. So far, for the fiscal year of 2017, 20 people have been baptized.

The church actually began when Coweta, Emmanuel Southern was seeking help to keep its doors open, and at the same time, leadership at Broken Arrow, First was praying about planting its first campus and was looking at Wagner County, which statistics showed was the most unreached county in Oklahoma. Both sides came to an agreement, and on Oct. 2, 2011, Emmanuel Southern became a campus of Broken Arrow, First, and the name was changed to Coweta, Community.

Mask said there are many “God” stories going on at Community now, but one of the most remarkable is Mask himself.

He explains: “In 2010, I was broken and suicidal. I had paroled up to Broken Arrow to live with my parents in 2007 after spending a year and a half in a Texas prison for possession of controlled substances with the intent to distribute. On May 2, I went to Broken Arrow, First and heard the Gospel preached. I came back the next two weeks, and on May 16, I surrendered completely to Jesus Christ. I was baptized May 23.”

Not long after that, Mask was invited to give his testimony at Jackie Brennen Prison in McAlester.

“God used that to open a door for me to go into the Tulsa County Juvenile Detention Center to minister to the young men and women locked up there,” he said. “God did some amazing things in the year and a half I ministered there, and I saw many young men and women come to know Christ.”

Mask said he answered God’s call to ministry March 4, 2012. Ten months later, a staff position opened up at Broken Arrow, First, and he became young adults pastor and the Celebrate Recovery pastor, which he still oversees. In Oct. 2014, he went to the Coweta campus as interim, and in Jan. 2015, he became Community’s fulltime pastor.

Mask noted that Shamas’ story is just one of many memorable experiences at the new church.

“The parents of a family were saved, and recently their daughter-in-law came to faith in Christ, and just a few weeks ago their son was saved,” Mask revealed. “Two men who are church members had been praying for four years were saved during the last two years.

“The father of one of our faithful members has been in and out of prison his whole life, but just last year, he gave his life to Christ and was baptized,” Mask continued. “He now chairs an AA meeting in Broken Arrow and brought five or six individuals from the group to church, and we have seen three of them come to know Christ.

“Everyone who has prayed to receive Christ is an amazing story,” Mask emphasized.

He added that the church is praising God for a gift of $300,000 to purchase an acre of property located in front of the church, with the remainder to go toward a new worship center.

So as Community Church continues to serve through a plethora of ministries, and lives are being changed. Shamas’ baptism is just one of the amazing stories to come to the front.

Shamas is now able to wiggle his toes and has some feeling in his legs. He can also raise his arms above his head.