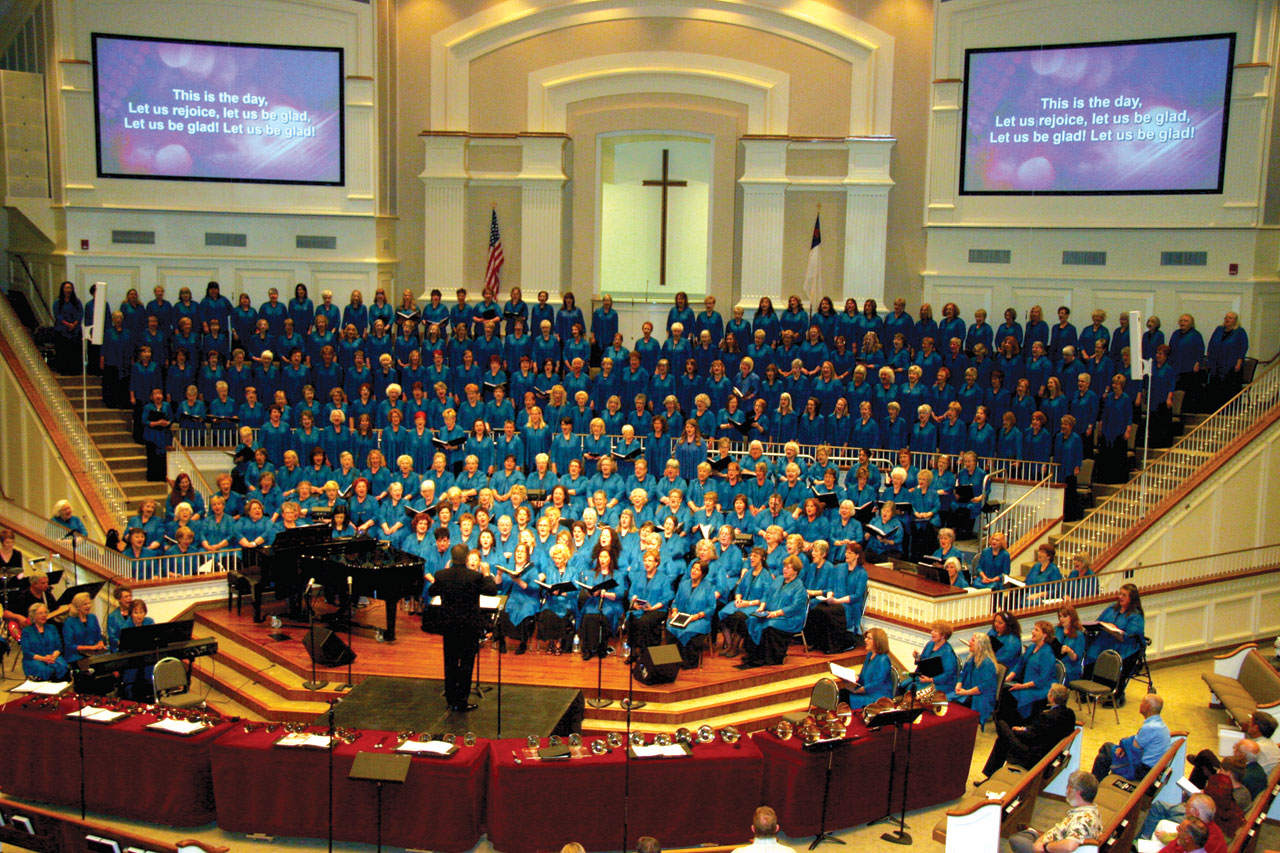 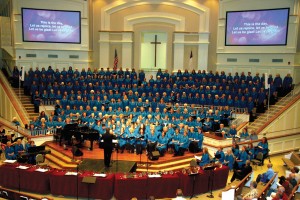 The Singing ChurchWomen of Oklahoma in concert May 3 at Oklahoma City, Southern Hills (Photo: Dana Williamson)

They would have been proud to see the results of their dream. In a small room behind the stage of B.B. McKinney Chapel on the grounds of Falls Creek Baptist Conference Center some 26 years ago, James D. Woodward, Paul Magar and Mary June Tabor made plans to begin a state Baptist women’s choir, similar to the Singing Churchmen of Oklahoma.

Woodward, artist in residence at Oklahoma Baptist University (OBU), would direct the choir, just like he did the Churchmen. The Baptist General Convention of Oklahoma (BGCO) music department, led by Magar, would sponsor the group. Tabor, BGCO music assistant, would take care of the many logistics of the group.

The singers would be chosen by ministers of music who were members of the Churchmen. Each man would provide a soprano and alto singer from his church. Just like the Churchmen was the first group of its kind in the Southern Baptist Convention, they would be the first state women’s choir in the SBC. 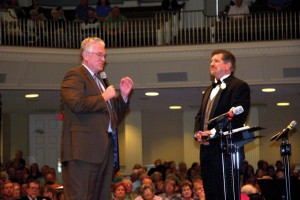 With all the details in place, the newly-organized Singing ChurchWomen of Oklahoma held its first retreat at OBU in the fall of 1989, and the 189 singers first appeared in concert at the BGCO annual meeting at Tulsa, Eastwood in November.

On May 3, the ChurchWomen, now more than 300 strong, presented a 25th anniversary concert at Oklahoma City, Southern Hills, reflecting on their history and their heritage in the world of Oklahoma church music.

Through the years, the ChurchWomen have been bathed in tragedy, as well as performances and mission opportunities that have led the women across Oklahoma and around the world.

The tragedy occurred a little more than a year following their formation, when after only four performances, Woodward, Tabor, Magar and his wife Judy, a member of the ChurchWomen, were killed in a catastrophic plane crash. The four were returning to Oklahoma City from a concert at Woodward, First, when the private plane, piloted by Woodward, went down just short of the airport. Ironically, the ChurchWomen’s current director, Randy Lind, was minister of music at Woodward, First at that time. 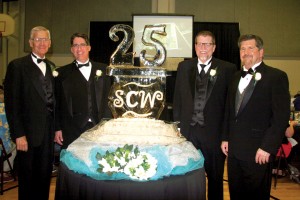 The 25th anniversary concert, with 41 charter members present, was a remembrance of the past as well as a celebration of the present. Three of the songs, “He Keeps Me Singing,” “Was it a Morning Like This” and “Majesty and Glory of His Name,” were from the first concert year.

Since the death of Woodward, the ChurchWomen have had four directors, all who were present at the concert, and who joined Lind, BGCO worship and music specialist, in directing the group. Bill Green, director for almost 19 years (1991-2009) who took over the church music department after Magar’s death, led the women in “The Majesty and Glory of His Name.” Ken Gabrielse, (2009-2011) former BGCO worship and music ministries specialist, now dean of fine arts at OBU, conducted “How Great Thou Art” and Bart Morrison, (2011-2013) former minister of music at Ada, First, now living in Arkansas, directed “At Calvary.” The group also performed “Lord of All,” arranged by Woodward, which was a featured song at the 20th anniversary concert at the Civic Center Music Hall. Betty Woodward, Jim’s widow, directed the song at that anniversary celebration.

Through the years, the women not only have sung their way around the world, but they also have left indelible marks on places they visited. Their first out-of-state trip was to PraiSing in Nashville, where they were a part of introducing the 1991 edition of the Baptist Hymnal. Seventeen years later, they traveled to Glorieta, N.M. to premiere another new Baptist hymnal, with a stop to sing at the beginning of the play “Texas” at Palo Duro Canyon near Amarillo, Texas. 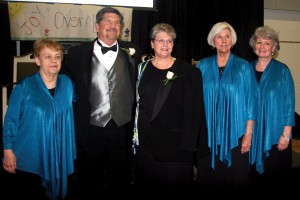 The group, along with the Singing Churchmen and Oklahoma Baptist Symphony were featured performers at the Southern Baptist Convention in Salt Lake City, Utah in 1998. While there, they also participated in a Crossover outreach in Idaho Falls, Idaho.

Their first overseas mission was to Brazil in 1994, where 177 singers from 147 churches presented the Gospel in three cities, gave away 5,000 Portuguese New Testaments, 30,000 tracts and saw 1,000 professions of faith, including one of their Brazilian guides.

In 2004, more than 300 singers traveled to Romania and Hungary, where they sang in the largest concert hall in Bucharest, distributed $37,000 worth of Bibles and New Testaments, and saw 1,500 people come to Christ.

The women proved they are more than singers, when they wielded hammers, chain saws and crow bars during a clean-up effort following the E5 multiple vortex tornado in Joplin, Mo. In 2011. The group cut down trees, split logs, sorted and sized donated clothing, cleaned debris, repaired roofs, did dry wall work and gathered and took laundry to a laundromat. 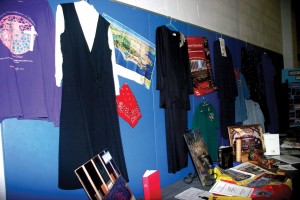 SCW attire from the past 25 years was on display. (Photo: Dana Williamson)

In 2013, the women participated in a mission to Colorado, where in addition to concerts, they helped Colorado Baptists with canvasing projects, worked in a school and ministered to children in a low-income area.

Green told the women he would use three words to describe them—prayer, sacrifice and joy.

“The reason you are able to do what you do is that you are prayer warriors,” he said. “You are also sacrificial. People don’t realize what you sacrifice to travel long distances to come to concerts, or the sacrifices you make to pay for mission trips.”

“When you stand up to sing, there is a flood of joy that comes over the auditorium,” he exclaimed. “You have brought so much joy to my life and to so many people all across the world.”

Gabrielse said he never planned to fill Bill Green’s shoes, but was thankful the ChurchWomen accepted him.

“You were born with great expectations,” he told the women. “You had tragedy early, but Bill came in and did something that can’t be duplicated.”

Morrison told the women about meeting Jim Woodward as a 16-year-old piano player at the Crystal Cathedral in California.

“He wasn’t pleased at first with a 16-year-old, but soon he was recruiting me to come to OBU,” Morrison said. “I was humbled to be your director when you look at the heritage of who has directed you.”

Lind said when he thinks of the Singing ChurchWomen, he thinks of excellent musicianship, women who love each other and a sense of sisterhood with opportunities to serve together.

“We don’t have a calling that ends,” he emphasized.