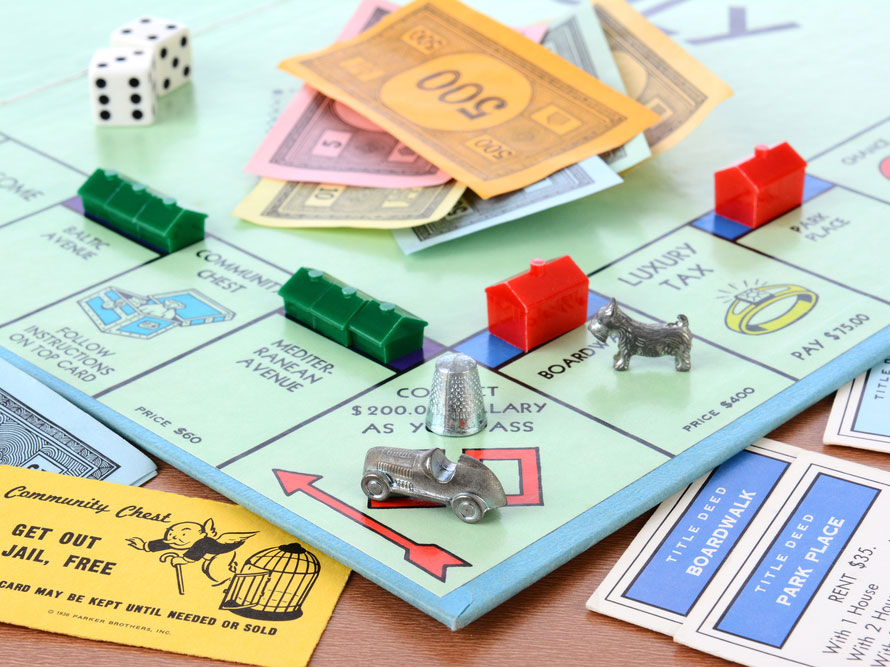 I don’t know Jesus’ exact position on the popular board game, Monopoly®, but I’m pretty sure He wouldn’t like it. And there are several reasons I don’t like it either.

I don’t know if it’s because of my dyslexia or what, but I hate counting stacks of money. It may be because I’ve served in countries where the exchange rate is astronomical. In Zimbabwe not long ago, one U.S. dollar would equal 642,371,437,695,221,000 Zimbabwean dollars. Or in simpler terms, one egg would have cost 35 million Zimbabwean dollars. I would have just handed the clerk a stack of money and said, “You count it out.”

I don’t know if there’s anyone else like me out there, but I’m a terrible money counter. You can put a stack of dollar bills in front of me, ask me to count them five times, and I’ll come up with five different answers. I am always amazed by people who work at banks and can buzz through a stack of money in the blink of an eye, always coming up with the correct amount.

It seems to me that Monopoly brings out our worst. I know it’s just a game, and some people like to use strategy. But have you noticed there’s not much difference between their strategy and greed?

Play this game with some of the sweetest people you know, and they transform into monsters right before your eyes. They’re out to buy everything on the board and run you into bankruptcy. Forget mercy, good will or kindness. It’s all about the win.

But maybe I’m not good at this game because it goes against my nature. The only reason I would want to put a hotel on Park Place is to invite the homeless to come and get a meal, take a shower and have a room for the night.

I would buy St. Charles Place and start a church there. We’d have a jail ministry to the next square over and then send missionaries across the board to North Carolina Avenue to start a satellite church, which would turn the Community Chest square into a Clothes Closet for the less fortunate.

I would also organize the Water Works to send its employees to underdeveloped countries where children are dying by the thousands due to lack of clean water and poor sanitation. There, they could help build clean water facilities.

And I would turn the Chance square into the Sovereignty of God square where we would look not at chance but at the Scriptures to guide our lives. I would turn the railroad squares into airports because you can’t take a train to bring the Gospel to the world’s most unreached. And I would take away the “Get out of Jail Free” card.

The enemy has told this generation it always has a “Get Out of Jail Free” card. He says there’s no penalty to sin, because society has taken care of it. You can have sex outside of marriage, and if you use proper protection, you won’t experience the consequences of your sin. Yes, you might avoid an unwanted pregnancy, but that won’t take away the scars of guilt and shame that come from violating God’s Word. As it says in Scripture, “But if you fail to do this, you will be sinning against the LORD; and you may be sure that your sin will find you out” (Num. 32:23).

The enemy will say you can cheat your employer out of time by using the Internet for personal reasons. He will even help you justify it by saying you don’t get paid enough. But Scripture says, “If anyone forces you to go one mile, go with them two miles” (Matt. 5:41).

The enemy also wants you to believe that you don’t have to support your family because the government will give you free housing, food and medical care. But “Anyone who does not provide for their relatives, and especially for their own household, has denied the faith and is worse than an unbeliever” (1 Tim. 5:8).

God is good and faithful to take away the penalty of our sin. That’s why He died on the cross. But many times we have to live with the results of our sin. In other words, there is no “Get Out of Jail Free” card.

Those struggling with the consequences of their sin need to know that Jesus did not give a “Get Out of Jail Free” card. Instead, He provided His Holy Word. “To the Jews who had believed him, Jesus said, ‘If you hold to my teaching, you are really my disciples. Then you will know the truth, and the truth will set you free’” (John 8:31-32).

You see, when it comes to giving freedom, Jesus really does have a Monopoly.