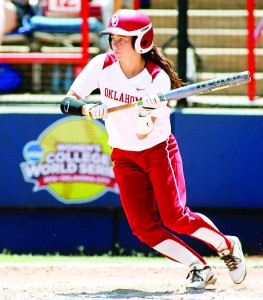 Briana Turang could not forget how the 2012 season ended for the University of Oklahoma softball team. She remembers vividly Alabama defeating the Sooners in that final game of the Women’s College World Series, and all she and her teammates could do is watch their opponents celebrate.

Something else she will not forget is what team chaplain Sarah Roberts said afterwards, when the squad circled around their spiritual leader. “She shared with us that we have shown who we praise when we have won, and now we have an opportunity to show who we praise when we lose,” Turang said. “That was the best thing we could hear that day. It changed our lives. It changed our outlook on the game. We realized that we were playing for something more than just ourselves.”

A year later, the Sooners returned to the WCWS and embraced the role of playing for more than the team. Local and national media announced the OU softball team wanted to win for the whole state after the tornadoes ripped through Oklahoma.

And win they did, in dramatic fashion. Facing Tennessee in the best-of-three championship series, OU pulled off the game-one victory in what Head Coach Patty Gasso called the greatest game she has ever been a part of.

Playing in extra innings, the Sooners faced a 3-0 deficit when they came to bat in the bottom of the 11th. They even faced two outs and were one strike away from losing the opening game, but Turang said she and her teammates were still confident.

“Obviously scoring three runs was more than we’d like,” she said. “We weren’t very uptight about it because we knew something was going to happen.”

Before this frame, the Sooners only mustered four hits, but they proved their confidence by recording three extra-base hits, tying the game, 3-3, and living to play another inning. Turang led off in the bottom of the 12th with a double, and then crossed the plate on Lauren Chamberlin’s walk-off home run, giving OU the 5-3 win.

The Sooners had no difficulties in game two, defeating Tennessee, 4-0, and winning the National Championship. After the state of Oklahoma went through much heartache and tragedy in the final weeks of May, the OU softball team truly hoped many of those who suffered could share in their joy of winning the title.

Playing for the state in the WCWS is a demonstration of the growth and spiritual maturity the Sooners experienced this year. Turang said the whole team committed to attending their weekly chapel services. Last fall, three of her teammates accepted Christ, and Turang said all three were baptized in Coach Gasso’s pool.

“Coach Gasso is a strong believer,” said Turang. “She shows her faith and shares her faith, and for me to be able to have people like that to look up to is an incredible experience. I couldn’t take anything over it.”

Losing to Alabama in the WCWS last year was a marking point for Turang and her teammates. She admitted it was not God’s plan for them to win in 2012, but she said they needed to have faith in what God was doing in their lives.

“We feel so blessed that God has given us the opportunity to play softball and use it to bring joy to Oklahoma,” she said. “This whole season, we have been emphasizing our faith. Now, getting a national championship puts everything into perspective. It shows us it wasn’t our year last year to win, and it was our year this year. God has a plan, and we just have to trust through His plan.”

Now at the end of her senior year, Turang looks to play softball professionally for the Arkon Racers. She also is engaged to former OU punter Tress Way and plans to go to nursing school. Lord willing, Turang has much to look forward to in her life.

The trials and victories she experienced these last two years may benefit her in the years to come. Truang said she will continue to trust in God, as He leads her through life.

“One of my favorite verses is John 16:33 which says, ‘In this life you will face trials and tribulations but take heart because I have overcome the world.’ This is a really important verse for me, because it helps me be confident in God, knowing His plans are greater than my plans,” she said.

Though there may be seasons of defeat, Christians know they claim the eternal victory.