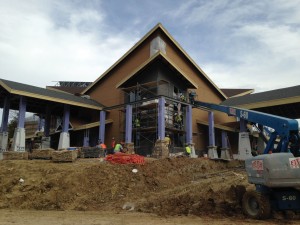 The Jordan Welcome Center is expected to be finished this summer

DAVIS—April is the time of several retreats at Falls Creek Baptist Conference Center near Davis. This means many will experience Falls Creek for the first time this year and will discover a lot of construction and renovation being done in the middle of the campgrounds.

As announced last year, Falls Creek’s four new construction projects are happening now, including the Mathena Family Event Center, the Thompson Family Lodge, and the Jordan Welcome Center as well as the new sports pavilion. Also, what has been known as Lodge One is being renovated and has been renamed the Kannady Family Lodge.

Scott Phillips, leader of the Baptist General Convention of Oklahoma’s Operations Team, said the renovation of the Kannady Family Lodge is close to completion, and a dedication ceremony for the lodge is scheduled soon.

“With Spring rainfall, we’ve had some minor delays, but overall, Wynn Construction has done a fantastic job, maintaining the schedule,” said Phillips. “The Jordan Welcome Center will probably be finished by (the first week of summer) camp, but it will not be put to use right away. We expect to be using it by the end of camp.” 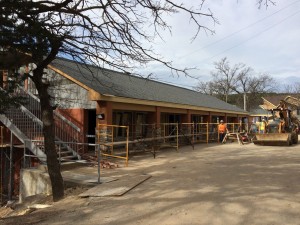 The renovation of the Kannady Family Lodge is close to completion

Phillips said the Thompson Family Lodge and the Mathena Family Event Center are scheduled to be completed by the end of the year.

“The exterior of the event center is more complete than the interior,” he said, explaining the construction team has been doing iron work for the second level mezzanine and is waiting to do slab work.

The event center, Phillips said, will be an “advanced building” with all digital systems, including the overhead lights.

“This state-of-the-art facility is comparable with any major convention center venues,” he said.

Work also continues for the Thompson Family Lodge, which will house 50 rooms and will be connected to both the Jordan Welcome Center and the Mathena Family Event Center.

“Part of our construction involves the logistics of connecting all these buildings, while constructing them as standalone facilities,” said Phillips. 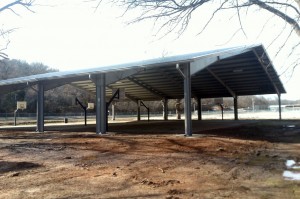 The sports pavilion at the recreation area down by the river now features covered basketball courts.

All construction will be shut down during the summer camp weeks.

Camp attendees will be able to enjoy the new features at the sports pavilion, which include new bathroom facilities, and all the basketball courts will be covered.

“The shaded basketball courts include a ceiling fan with a 24-foot span,” said Phillips. “It will be one of the largest fans available.”

With the construction occurring, those attending the April retreats will notice much dirt and mud in some of the common areas. Phillips hopes guests will “bear with us” at this time.

“Truthfully, I think the reaction of most folks, when they see it, is going to be one of inspiration,” Phillips said. “It’s exciting to see. And while it is a minor inconvenience because it’s a messy job site, the inspiration of seeing what God has already done in providing these facilities far outweighs any temporary hindrances.”