MOORE-The need for prayer and impacting lostness resonated throughout sessions of the 101st Annual Meeting of the Baptist General Convention of Oklahoma, Nov. 12-13, as messengers adopted a record budget, re-elected their president and approved 11 resolutions. The theme was “Finishing the Task,” based on Matt. 24:14.

Meeting at Moore, First, each session was opened by prayer for spiritual awakening, and the final session Tuesday evening was devoted entirely to prayer, led by the convention’s Prayer and Spiritual Awakening Specialist, Greg Frizzell.

As the meeting drew to a close, a crowd estimated at close to 1,000 gathered to join in a “Night of Praise and Prayer for Spiritual Awakening.”

The solemn assembly-like session featured focused prayers of praise and worship, thanksgiving for special blessings, corporate confession and repentance, intercession for BGCO ministries, churches and pastors, revival and spiritual awakening and a worship and covenant prayer of agreement. 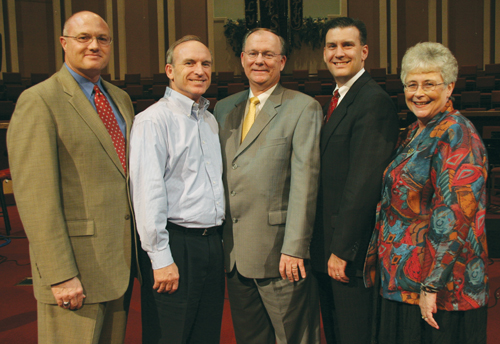 “We’ve lost what it takes to pray for the souls of lost men, women, boys and girls,” said Jordan. “Our God longs to see people saved. Our job is to passionately pray. We have a work to do-just pray, that’s all-just pray.”

While Jordan praised God for the work He has done through and among Oklahoma Baptists, whom he called “amazingly unified,” he pointed out the sobering reality that “Oklahoma, on our watch, is more lost than it has ever been.”

Referring to Frizzell’s latest book, Iceberg Dead Ahead! The Urgency of God-Seeking Repentence, which points to the “iceberg” of “sin’s cumulative consequences and God’s righteous judgment” on the figurative horizon, Jordan asked, “what are we to do? 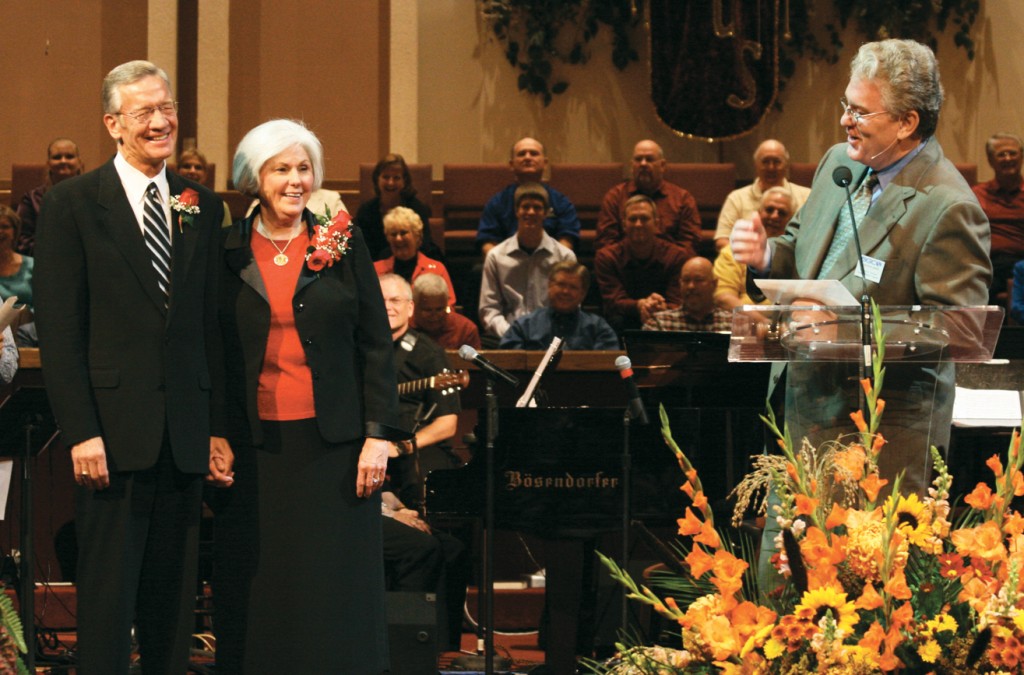 “With the iceberg dead ahead, with the darkness surrounding us, what are we to do? I believe it is one single thought or word, we just must pray.

“It isn’t a cop out or an attempt to walk away from or ignore our responsibility, it is simply saying in the end, when we have done everything we know to do, when we have poured our lives out and have sought to do the very best we can, ultimately, it comes back to this, if God does not put His hand upon us, if God does not cleanse us and forgive us-if God does not show up-the darkness will continue to surround us.”

“We don’t need perfunctory prayers in church,” he said. “What we need is prayer that brings us before a holy God and recognizes that we’re not in the presence of the big daddy, we’re in the presence of Holy God of Heaven. And when we get in His presence, we come to bow down low before Him and confess our sins and cry out to him. (We must) understand that the church will not move forward without moving forward on our knees!”

Jordan said he sees only one result when Oklahoma Baptists humble themselves and confess their sins to God with pure hearts.

“I see a Holy God moving in this place, changing culture, where gambling and drinking and abortion and all of those things are so much darkness in our land. I see God shining the light of His holy power with glory coming down in a place called Oklahoma and doing a work that we cannot lay at the feet of any human being or any individual (that) we just have to declare, ‘Holy God of Heaven, You showed up, you answered us.’ That’s what I see . . . we just have one thing to do, we’d better pray.”

Kelly King, women’s missions and ministries specialist, led a passionate prayer, praying for the lost family living next door to her and for her brother-in-law who is lost. She urged each messenger to pray specifically for at least two people they know who needs Jesus.

In business sessions, the 874 messengers adopted a 2008 Cooperative Program budget of $24.6 million. The receipts will be divided with 60 percent ($14.76 million) staying in Oklahoma and 40 percent ($9.84 million) forwarded to the Southern Bapitst Convention.

Messengers approved 11 resolutions, including embracing an “urgent call to sustained prayer, genuine repentance and evangelistic passion;” an affirmation “that the conservative resurgence of Southern Baptists has returned us to our historic roots of commitment to the Bible as the infallible and inerrant Word of God,” and that “It is incumbent upon us to focus our energies and resources toward a ‘Great Commission Resurgence’ in accordance with Matthew 28:19-20;” and a resolution in opposition to “any hate crimes legislation that potentially criminalizes speech and beliefs, which would threaten our First Amendment rights,” and also expressing appreciation to Oklahoma U.S. Representatives Dan Boren, Tom Cole, Mary Fallin, Frank Lucas and John Sullivan for casting “nay” votes on such hate crimes legislation.

Messengers also approved resolutions affirming the sanctity of life, encouraging Oklahoma Baptists to apply biblical values when voting, opposing the sale of high-point beer and wine in Oklahoma grocery and convenience stores and Resolution No. 11, “On Ministry to All People,” which related to “taking the message and love of Christ to people of all races and nationalities throughout Oklahoma and the world.”

The resolution continued: “While we as Christians are under biblical mandate to respect the divine institution of government and its laws, let it be known that House Bill 1804 related to illegal immigration will not change our ministry to any people. We will continue to work with all of our churches and missions to accomplish this task. While we do not intentionally harbor or employ illegal immigrants in our work, neither do we screen or profile individuals before we minister to them in the name of Jesus.”

In a miscellaneous business session, Bruce Mason, director of missions in Craig-Mayes Association, and an advisor to Oklahoma Baptist Homes for Children board of trustees, made a motion that the annual Mother’s Day Offering be taken only for OBHC. The past few years, the offering has been divided between OBHC and Baptist Village Retirement Communities. Messengers voted to refer the motion to the executive board for consideration.