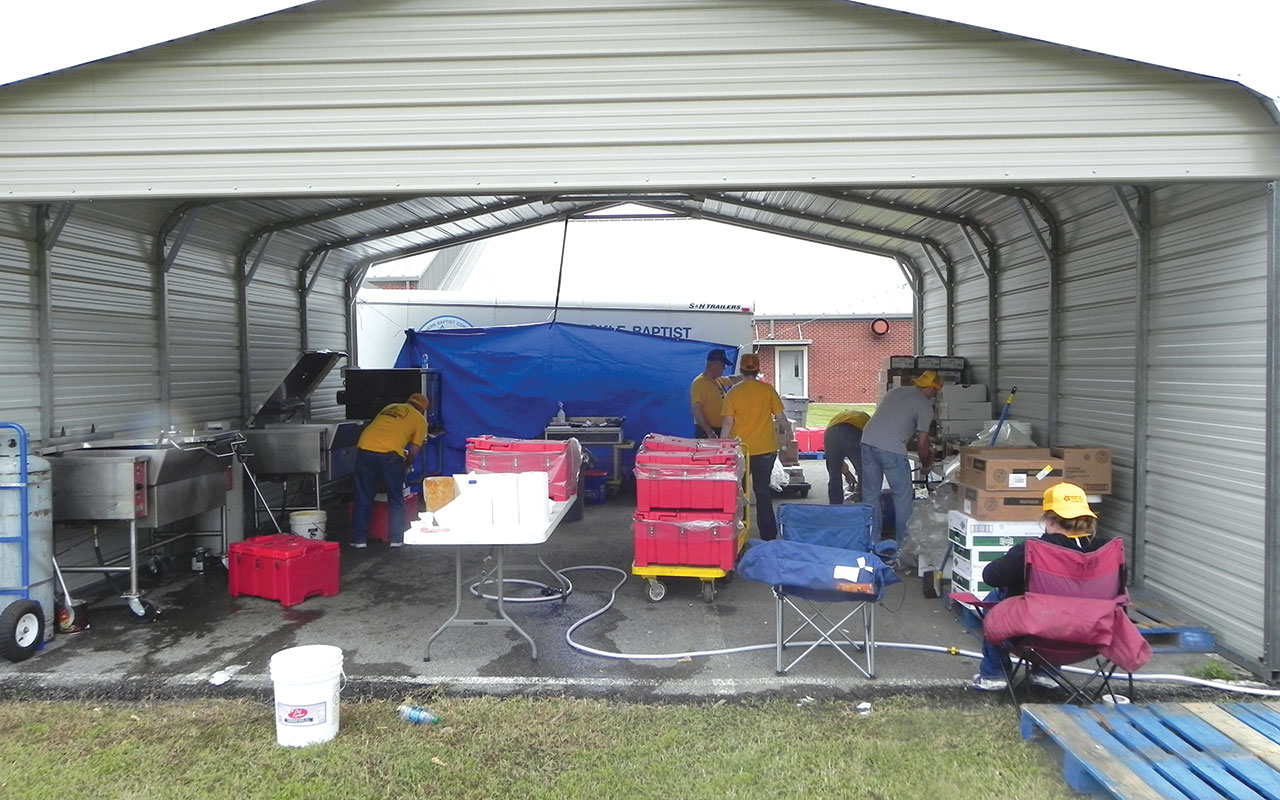 “He looked like he hadn’t slept in days,” said Thompson of Colyell, La. “He sat down and was shaking, said he hadn’t had food.”

The volunteers at Woodlawn Park in Hammond, La., provided Davis with food, and then began the process of completing forms for disaster relief team members to clean his flooded home. “He gave me his paperwork and I was able to file his insurance in 15 minutes,” Thompson said. “He sat there and wept.”

Davis told Thompson that he had cried out for God’s help all night.

“He sent me here, and you were able to help me,” Davis said. That evening, he would profess faith in Jesus Christ.

With widespread flooding across Louisiana, Texas and Mississippi, Davis represents just one homeowner that SBDR will help. With an estimated 5,000 homes damaged in Louisiana, 1,900 in Mississippi and 2,000 in Texas, Davis’ story will likely repeat many more times.

“This is growing by the hour,” said David Abernathy, the Louisiana Baptist Convention’s (LBC) Disaster Relief incident commander. “We’re finding a lot of damage in rural parishes, which have small communities that are real resourceful, but they can only go so far.”

As water recedes in north Louisiana, communities in south Louisiana that weren’t even touched a few days ago now have floodwaters. Water is slow to drain, and there is no more flash flooding, Abernathy said.

LBC has organized the response in five regional operations across their 28-flooded parishes. The North American Mission Board (NAMB) is assisting with coordination of the multi-state response in Louisiana. To date, there are SBDR volunteers serving in the Louisiana response from Alabama, Arkansas, Florida, Georgia, Illinois, Kentucky, Louisiana, Missouri, Oklahoma, South Carolina, Tennessee and Virginia.

Disaster Relief teams from the Southern Baptists of Texas Convention and Texas Baptist Men are coordinating efforts in Texas. The Northwest convention’s SBDR team is handling additional relief efforts in Washington. Arkansas Baptists are coordinating SBDR ministry in their state. NAMB is sending supplies to aid all of those efforts.

“I’ve been amazed at the outpouring of support we’ve gotten because a lot of these states have been through major disasters of their own in the last six months plus,” Abernathy said. “Still, they have responded to the call with anything they could send us. It brings back how much we can do when we work together.”

In North Monroe, La., Wes Johnson of Chandler is leading the SBDR effort from the campus of North Monroe Church (NMBC) with teams from Louisiana, Oklahoma and Alabama. They have requests for the cleanup of 92 homes.

“We have a wonderful college team here from the University of Alabama,” Johnson said. “They get to see witnessing to helpless, hurting people. They are learning how to deal with that and how to react in a caring and positive manner.”

Johnson said NMBC has been a gracious host to the volunteers.

“They have done great stuff for us, opening their hearts and building,” Johnson said.

“It is predicted that the cleanup for Louisiana will take two months. However, it is tornado season, so we are committing for three weeks, and we will see what the forecast looks like,” Porter said.

On March 21, Oklahoma feeding coordinator Dean Kiser of Arcadia dispatched the Arbuckle Association feeding unit to Monroe, where officials had requested 4,000 meals per day through the week of April 18.

“NMBC responded to the flooding first of all by trying to save houses through sandbagging,” Dye said. “We spent most of Wednesday through Friday fighting the flooding with limited success.

“It was truly remarkable though to see young men in their 20s, many with their homes already flooded, staying up all night fighting the rising water with their neighbors.”

After the floods, NMBC switched to recovery mode.

“We created a food team to cook meals and deliver them to the workers and dislocated families,” Dye said. “Last week, NMBC prepared nearly 10,000 meals and distributed them throughout the community. We have more than 150 volunteers working in food service.”

The Mississippi Baptist Mission Board is establishing one of their operation centers in Clarksdale, which is near the Mississippi River in west Mississippi, where most of the original flooding occurred in that state. State Disaster Relief director Don Gann said the water has receded enough that work can begin there.

Meanwhile, he plans to establish a second response center in McLain, which is in southeast Mississippi.

Terry Henderson, Texas Baptist Men’s Disaster Relief director, estimated that 2,000 homes received flood damage there. Water has just receded from Caddo, and cleanup work has begun there. Other mud-out teams are working on homes from Newton to Orange, he said.

“This week we’re getting into communities and assessing all up and down the Sabine River,” Henderson said. The Sabine River was a major source of flooding, but receding has happened faster than expected.

Kirbyville continues to be a major challenge. At least three Baptist churches there have water up to their eaves, he said.