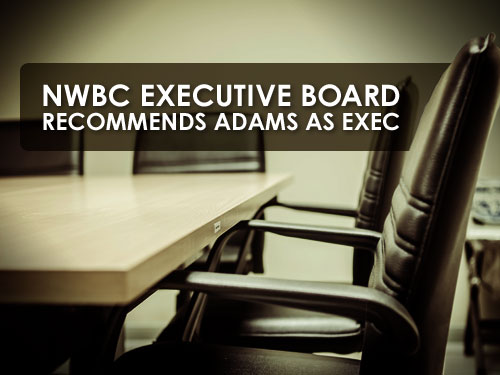 VANCOUVER—The Northwest Baptist Convention (NWBC) executive board will recommend Randy Adams, the Baptist General Convention of Oklahoma’s church outreach team leader since 2004, as the convention’s next executive director. Adams—approved by the board at a Feb. 21 meeting—must be elected by NWBC messengers at a called meeting slated for April 11.

Adams, 51, was the unanimous choice of a five-member search committee appointed last summer by NWBC president Steve Schenewerk. If elected by convention messengers in April, he will succeed Bill Crews, 77, who is retiring.

Meeting at convention offices in Vancouver, Wash., the board voted unanimously to move the recommendation forward after about 90 minutes of questions and answers with Adams.

“We are very excited for Randy and Paula as he assumes leadership of the Northwest Convention.  Randy is imminently qualified and will provide dynamic and wise leadership to the convention,” said Anthony Jordan, BGCO executive director-treasurer. “He has proven himself as an effective leader at the BGCO. As his friend and colleague, I will greatly miss him but believe God has clearly directed his path. We wish him the very best.”

“I hope I’ll be worthy of your confidence and your vote,” Adams said after the vote was announced. “Thank you for your heart to reach the Northwest. We hope to join you in that very soon.”

Among topics Adams discussed with the board was the importance of relying on God for the evangelistic task in Oregon, Washington and north Idaho.

“One of the greatest concerns I have is that we often rely on what we know and what we’ve done,” Adams said. “I don’t ever want to become a person who doesn’t trust in the Lord. We need what we can’t do—we need God to intervene … in reaching the lost in the Northwest. One of the things I see as important is calling us to a deep dependence and obedience to the direction of God.”

He emphasized the importance of cooperative relationships among NWBC churches and leaders.

“One of the things I would expect a lot is to be on the road, to be together where you are, wherever that might be,” Adams said. “We need to do everything we can to build and maintain a high level of trust in the work of the convention, to love each other, like each other and trust each other and, therefore, work together.”

He stressed the importance of helping increase the leadership effectiveness of pastors serving in various situations. “It doesn’t matter how large or small our churches are regarding our need to continue growing and learning,” he said. The convention should “connect with pastors in the ways they want to connect.”

Helping pastors with leadership development bears long-term impact, Adams noted: “If you can affect a pastor, that stays in place for as long as he ministers. Churches are subject to their pastors, for good or ill, so affecting the pastor is critical.”

Discussing his leadership role on the Church Outreach Team at the BGCO, Adams highlighted selecting “great people and to maintain a great relationship with the people who are already there” as a critical task. He described his leadership style as “servant leadership” that collaborates on strategy: “That’s where the fun is for me, the ministry side of things, supporting people and keeping them motivated.”

He pointed to the importance of starting churches and revitalizing existing ones in a mission field like the Northwest region.

“It’s very exciting to me to still be—after 65 years of ministry here—on the front side of trying to reach the Northwest,” he said. “The churches of tomorrow are either the churches we start today or the churches that are already there being re-birthed. One of the things that I really agree with the North American Mission Board (NAMB) about is the emphasis on church planting.” The challenge is sustaining church planting efforts “in a strong, steady and consistent manner over time,” he added.

The BGCO team Adams leads includes 80 people, about half of them collegiate ministers, as well as many evangelism and church planting areas. In addition to supervising staff leading those areas, he works with staff at NAMB and International Mission Board regarding the convention’s mission partnerships.

Born in Idaho and raised in Montana, Adams professed faith in Christ as a child and was baptized at 16 years old Whitefish, Mont., First He received a bachelor of science from Montana College of Mineral Science in 1983, then moved to Texas to attend seminary. He earned master of divinity (1986) and doctor of philosophy (1993) degrees from Southwestern Seminary.

He and his wife, the former Paula Ketchum of Bakersfield, Calif., married at the end of 1981. They have two sons attending Oklahoma Baptist University. He noted he would look forward to ministering with his wife if convention messengers elect him.

“One of the joys we’ve had over the years is partnering together in ministry,” he said. “We’re looking forward to serving together in ways we haven’t been able to in recent years since being on the convention staff.”