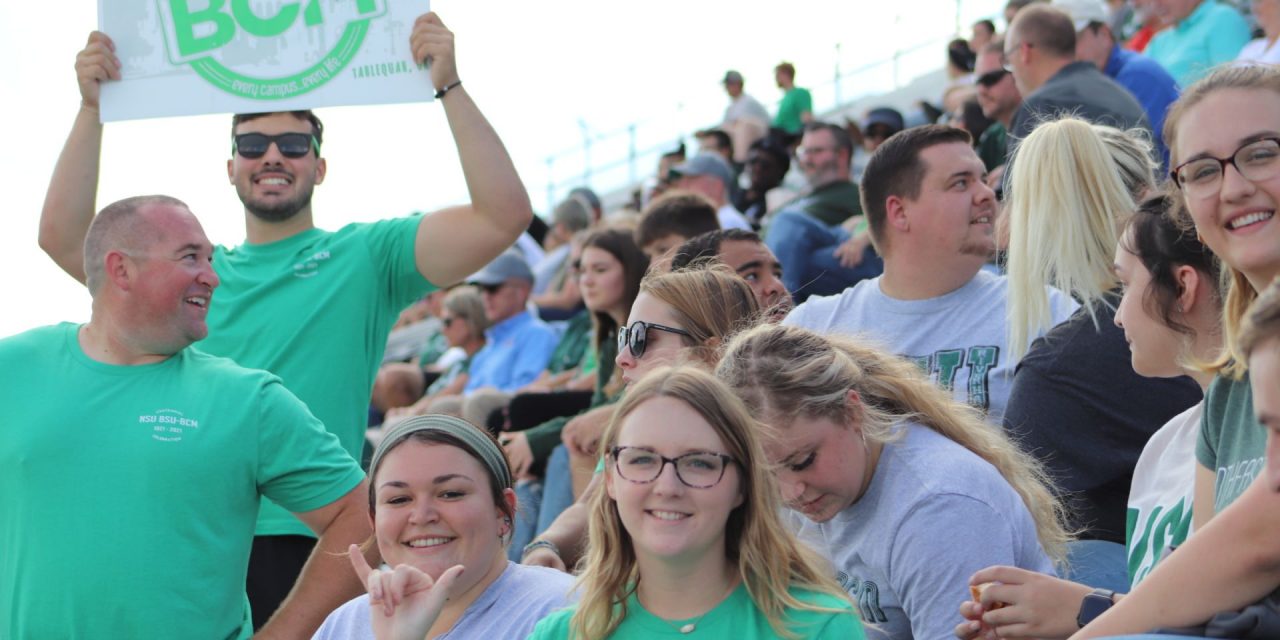 Above: Northeastern State BCM students and alumni attended the homecoming football game together on Oct. 2

NSU BCM directors and alumni from past decades and present met at the campus BCM building for a “Noonday” celebration service and luncheon. Other events included BCM members attending the NSU homecoming football game as a group and an after-game pancake & coffee fellowship, a long-held tradition of the NSU BCM.

Carissa Jones, Oklahoma Baptists collegiate ministries assistant, has researched the history of BCM in Oklahoma. She explained that the NSU campus ministry, which began in 1921 as a ministry of Tahlequah, First, actually predates the formation of BCM (previously called Baptist Student Union) which officially began in 1924.

“Baptist collegiate work began in Oklahoma in 1916 on multiple campuses,” Jones said. “These were informal, student-led groups affiliated with the Baptist Student Missionary Movement. The growth of these groups led to the formation of the first official Baptist Student Unions (BSU) in Oklahoma in 1924 and a resolution to join the state convention that same year.”

Both alumni and current BCM students enjoyed all the weekend festivities.

“We had such a great homecoming weekend celebrating 100 years of BCM,” said Bryce Stafford, who has served as BCM director since 2017. “We loved spending time with friends, family and our alumni. I was especially glad to see one alumnus from the class of 1970 was here. He remembered coming to BCM (then BSU) in this building when it was brand new.”

Bobby Lipscomb, NSU BCM director from 1999-2017, encouraged the alumni and current students who attended the luncheon with his recollections about his time of service in the campus ministry and some devotional thoughts about the influence of BCM on others. Lipscomb especially emphasized how he was involved with BCM ministry with his wife Debbie, who passed away in 2018 after a bout with cancer.

“Remember we taught you all, much of life is caught, not taught,” Lipscomb said.  “We conveyed to you, (over the course of time) 10,000 people are watching you, by the time you reach my age (69).

“Recently, a friend said to me, ‘Hey, I talked to someone the other day, who told me you made a big difference in their life.’ He told me their name, but I couldn’t tell you who they were. But, it illustrates that something you will say, something you will do—even though you may not realize it—people will catch that and take it with them, and it will influence their actions.”

Lipscomb’s point is demonstrated through Stafford who was a disciple of Lipscomb and became Lipscomb’s replacement as NSU BCM director.

“It was a sweet time of fellowship and special memories,” Stafford said. “But I was also pleased that our leaders from the past were able to meet students who are serving in leadership today. Our campus ministry continues; BCM is influencing lives with the Gospel on our campus. Here’s to another 100 years!”