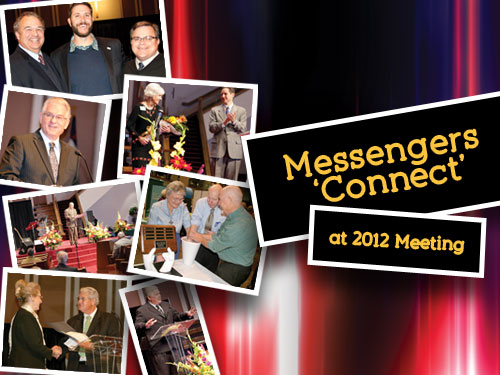 MOORE—The Baptist General Convention of Oklahoma (BGCO) announced a “ReConnect Sunday School” initiative at its 106th Annual Meeting Nov. 12-13 at Moore, First. The meeting, which focused on a “Connect” theme, provided an opportunity for Oklahoma Southern Baptists to conduct business, elect officers, gather as a community and share their vision for the church for 2013. 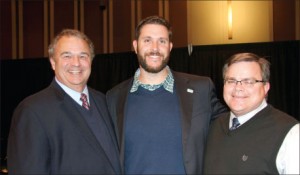 The “ReConnect Sunday School” initiative calls on Oklahoma Southern Baptist churches to revitalize adult and children’s educational Sunday Schools as a means of evangelism. Also, a preview of a 2013 service evangelism initiative called “Serve Oklahoma” was given that will act as a catalyst for a statewide initiative to mobilize Oklahoma Southern Baptists to get outside the walls of the church building to transform their community for Christ.

“The Annual Meeting is designed to bring together for worship and projects centered on the common mission to serve others and reach people for Christ,” said Anthony L. Jordan, BGCO executive director-treasurer. “The initiatives will be an avenue through which we’ll accomplish these goals.”

The 106th meeting consisted of messengers, who are representatives with voting privileges elected by the churches cooperating with and contributing to the work of the BGCO. As part of their participation, the messengers voted on nine resolutions that are expressions of concern or opinion by the convention, elected officers and reviewed budgets.

At this year’s meeting, all nine resolutions passed. Highlights include:

• Resolution No. 5: On Prayer and Encouragement for Elected Officials

• Resolution No. 6: On Sanctity of Life and Personhood

• Resolution No. 7: On the Covenant of Marriage

• Resolution No. 8: On Religious Liberty

• Resolution No. 9: On Armed Forces

In particular, messengers approved Resolution No. 8, “We advocate religious liberty for all people and call for action in two areas. We call on the president to instruct the Department of Health and Human Services to withdraw the mandate for healthcare plans to provide contraceptives and abortion-causing drugs and devices as a violation of religious liberty. We also call on the president to ensure the religious liberty of military chaplains to minister according to their religious consciences without fear or coercion. We wholeheartedly support the ministry of chaplains in the United States military.” 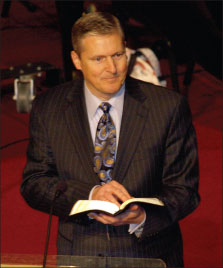 Messengers also approved the 2013 financial plan that funds Falls Creek summer camp and other key ministries. The plan includes a 2013 Cooperative Program (CP) Allocation Goal of $25.6 million, which includes $3.375 million in Southern Baptist Convention (SBC)/BGCO Shared Ministry Causes, and under a SBC/BGCO CP Allocation Plan split of 46/54 percent, $10.2 million to the SBC and $12 million to the BGCO.

In addition to the business activities, music, scripture and prayer filled the two days.

Jordan drew out some principles from the book of Nehemiah, whose heart was broken when he learned that the walls and gates of Jerusalem were still destroyed and determined in his heart to see them repaired. Jordan pointed out some leadership principles he gleaned from Nehemiah:

“Leaders have the ability to hear differently. Nehemiah heard the voice of God speaking to him, even though he was far from Jerusalem.”

“God’s leaders risk what others will not. You don’t have to rely on your ability . . . but God’s. He is our source!”

As to the application for today, Jordan said he sees rubble all across Oklahoma—”in 90-some casinos, the fact that we are number five in the number of teenage pregnancies, the churches are in turmoil. 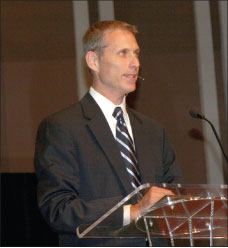 “But the greatest rubble is plain, everyday apathy,” he stressed. “And, I see the apathy more demonstrated in our Sunday Schools than in any other place.

“But, I want to tell you it’s not a worn out tool. It connects people, it’s transformational, it’s inspirational—it’s doing life together . . . it’s me caring about you and you caring about me.”

With a brief look at the progress made at Falls Creek Baptist Conference Center, Jordan cast an eye to the future, and said there is more to be done.

“There is a debt to be removed,” he declared. “Under God, we have a responsibility to rise up and get the remaining debt paid. Also, we need to rise up and convert the amphitheater—what the youth call ‘the old tabernacle,’ into a cafeteria and more meeting space and add motel rooms.

“I ask you to take hands with me and others. Can we arise and build?” Jordan concluded. “We can because we serve a might God who owns the cattle on a thousand hills!”

The pastor of Oklahoma City, Southern Hills, Douglas O. Melton, who has served as BGCO president for two years, delivered a sermon during the opening session. Preaching out of 1 Sam. 17 on the story of David and Goliath, Melton urged messengers to face their “giant.”

“In our churches and conventions, we face a giant. It is the giant task of reaching a lost world with the Gospel,” he said. Melton called on Oklahoma Baptists to be obedient to God, like David, who despite popular opinion, did what was right.

“David did not retreat in battle because he was where God wanted him to be, and that is the way we should be in these challenging days.”

Messengers also heard a report on BGCO Conference Center and Camps. According to D. Scott Phillips, leader for the Church & Family Equipping Team, the attendance at the summer 2012 CrossTimbers Mission Adventure Camp was 2,564.

“There were 326 decisions for salvations and 622 total decisions,” said Phillips. “One in four children, who go to CrossTimbers Mission Adventure Camp, will make a decision. Half of those decisions will be for salvation.” 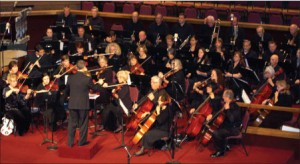 The Oklahoma Baptist Symphony, now it its 20th year, offered worship through music on Monday evening.

“Last year, when I shared this report, I told you we were at capacity; that we could not get more kids in. But that’s only if the camp were located where it was. Unexpectedly, God has done more than we could ask or imagine. This spring, through the generosity of the Green Family and Hobby Lobby, God provided us with a new camp (the Newburn Conference Center in Davis), that is more than double the capacity for what we have known for the last years, for potentially more than 500 students housed in the facility on any given week of camp,” he said.

Plans are underway to use that camp site for summer 2013. For more information and photos, visit bgco.org/hobbylobbygift. Phillips also announced the addition of a childhood ministry specialist for the BGCO. Glenn Barber, who previously served at Moore, First, came onto the BGCO staff to replace Mark Jones and will continue the work on CrossTimbers.

Phillips also announced the wastewater infrastructure improvements and the expansion of the high road at Falls Creek Conference Center are on budget and on schedule.

“This summer, we had the highest number of salvation decisions we have ever had at Falls Creek,” said Andy Harrison, Falls Creek program director. “There were 2,469 students who gave their life to Christ (in 2012). Hearing numbers like that never gets old. God has blessed us tremendously.”

Concluding the Monday evening session was a sermon from Jim Shaddix, pastor for teaching and training at The Church at Brook Hills in Birmingham, Ala. The popular author, who previously served as a pastor in Colorado, said that by some accounts “anywhere between 92-98 percent of the Colorado population” is unreached.

Kelly, Rowena Strickland professor of religion at Oklahoma Baptist University, delivering the convention’s annual sermon, said there are times we need to be reminded what that phrase really means.

“We find our confidence shaken and cry out for someone to rescue us,” he said. “Paul knows suffering, having been stoned, beaten, ship wrecked and imprisoned, yet in this passage, he speaks of the glory that will be revealed in us.”

Kelly said glory is something God has in Himself, yet He shared it with creation, but sin has darkened our ability to show forth God’s glory.

“That glory will again be ours,” Kelly proclaimed. “Creation is groaning because it was created to show the glory of God, but is not able to do it because man scarred it.”

Kelly observed that Jesus not only died for the sins of human beings, but for the entire creation.

“Do you know how big that makes God?” he asked. “There are billions of galaxies. One million Earths can be fitted into the sun, yet the sun is just a dwarf star.”

Kelly pointed out that redemption will come about when God redeems us fully and finally in the resurrection of our bodies.

“We are groaning for that day,” he acknowledged. “We long to be more of what God made us to be. God’s design for us is to receive a resurrection body just like Jesus has. Our future glory is certain because it is rooted in the purpose of God. We are predestined to be conformed to the image of His Son.”

Kelly said in this passage, Paul emphasizes that God is assuring us of our final victory.

“God has acquitted us,” Kelly declared. “No one can condemn. Nothing in creation can separate us from the love of God. This is our final victory—in God we trust.”