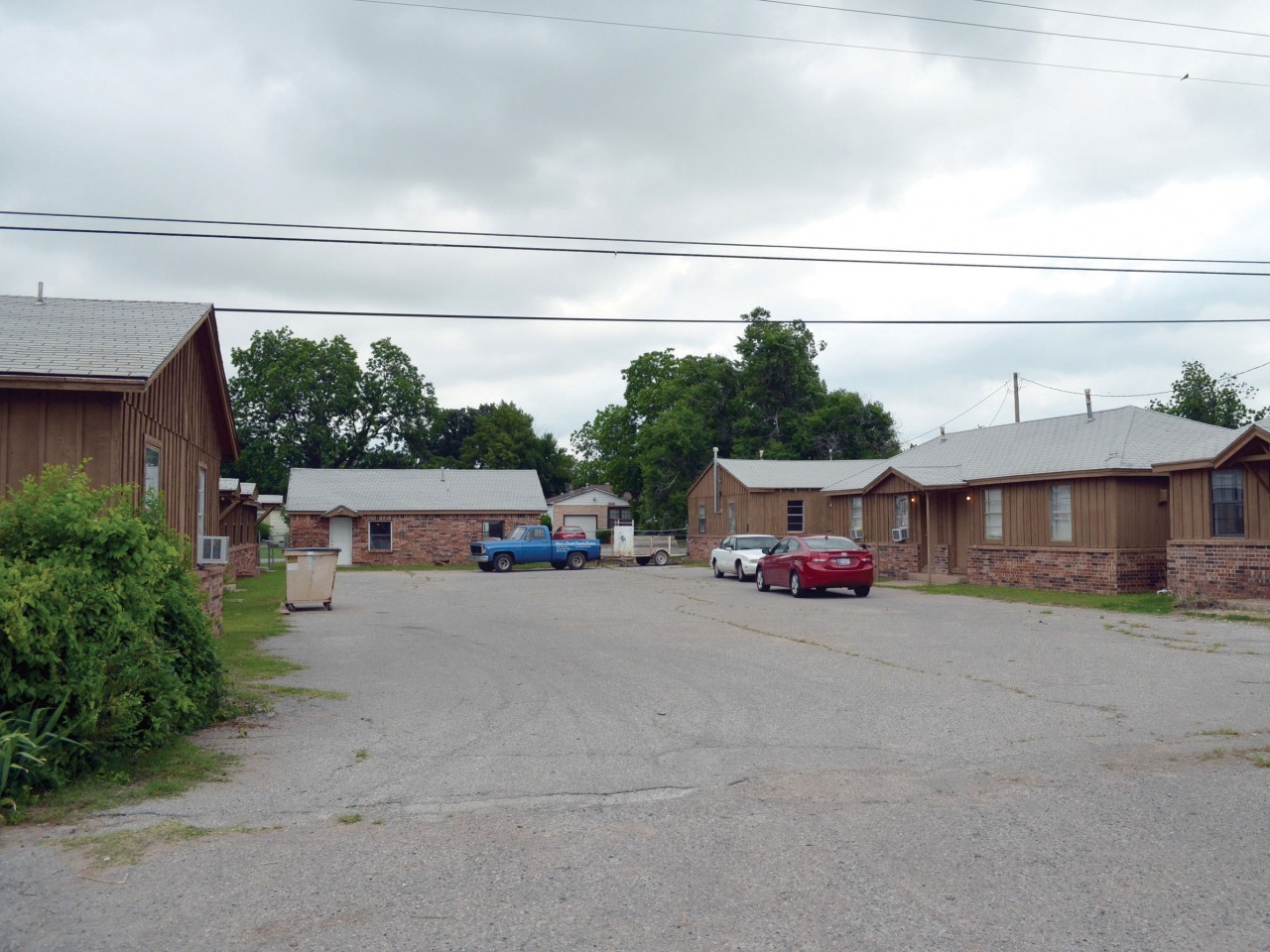 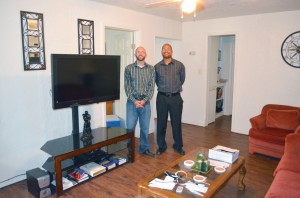 Assistant Director Jeff Elbert, left, and Senior Pastor Rick Gettens display the result of months of a labor of love by members of Lawton, Mind of Christ Multiethnic to repair one of the units of the Living Life: Housing with a Purpose program in the living room and kitchen of the first residence to house a participant in the program.

LAWTON—Twenty-seven-year-old Jeff Elbert and his wife, Mercedez, live in a tiny, but flourishing, oasis of hope in what was once a desert of despair in a section of North Lawton.

As assistant director of the Living Life: Housing with a Purpose program, a ministry of the Mind of Christ Living Life Community Center, Elbert is working closely with Lawton, Mind of Christ Multiethnic Senior Pastor Rick Gettens to convert what was once a den of drugs, thievery and prostitution into a garden where the soil has been tilled by the Holy Spirit, and the seeds of the Gospel are planted deep.

The housing program is located on about an acre of land in a North Lawton neighborhood about a mile south of Fort Sill and about a half-mile west of I-44 and Elmer Thomas Park.

But, Elbert said it’s best described as being in the middle of the city’s “red light district.”

The church began work on the Housing with a Purpose Program in March 2013 after Elbert came to Lawton two months earlier. The nine-unit complex of two 1,500-square-foot duplexes, one 2-bedroom, 1,200-square-foot unit and four 1-bedroom, 600-square-foot units arranged in an angular “U” shape was leased to Mind of Christ initially for $1 per year, and the church is securing the lease by paying monthly insurance premiums of $340, while it maintains an option to buy the property valued at $210,000.

Thirteen months—and a whole lot of headaches, discouragement, and prayer later—the first tenant moved in at the end of April.

The first year was “kind of rough,” Elbert understated.

“We were able to move the former property manager out, and began to gut the inside of some of the units, which were pretty bad inside,” he noted. “There was dry rot inside; one had been used as a meth lab, and there had even been a murder committed in another one. The presence of evil was in there.

“We prayed over everything, gutted them all out, and rented a big dumpster to put everything in. We started to re-build one first, and re-did the entire unit, the floors, the ceilings, all the walls, the bathroom and built a closet. Everything was re-done; the only thing that was original were the outside walls and the doors.”

That’s when the wheels began to fall off.

“Then we started getting broken into,” Elbert said. “We left our tools inside, and someone broke in and stole them. They vandalized the property; stole an air-conditioner, and even took a toilet and a sink.

“We got discouraged after working solid for about two months—sometimes seven days a week—being very diligent trying to re-build this. But, during the winter, we came back and were able to get three units renovated.”

The Elberts occupy the 2-bedroom unit. He is the assistant director and counselor/teacher of the program.

“One tenant is living in one of the units, and we have another tenant ready to move in any day,” he said. “It’s been a rough ride, and it’s still not over with yet, but we were able to get a fence around the property to keep people from walking through. At one time , we also were having homeless people breaking in and sleeping in the units.” 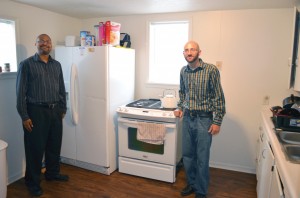 Assistant Director Jeff Elbert, left, and Senior Pastor Rick Gettens display the result of months of a labor of love by members of Lawton, Mind of Christ Multiethnic to repair one of the units of the Living Life: Housing with a Purpose program in the living room and kitchen of the first residence to house a participant in the program.

Gettens, who began Mind of Christ Multiethnic about seven years ago, said the overall goal of the Housing with a Purpose Program is “to produce healthy Christians. In our community, to get healthy Christians, you have to understand where they are. And, to go back into an environment they came from isn’t healthy. We have been here in this area for seven years, and they find Jesus, but then some go back into that same old scene and then they just tear away from Him.

“But, we have seen it—even with our one tenant—just being in a healthy environment makes such a difference. He also is very ill with cancer, and has lost everything. He had been in our ministry for five years, and never made a commitment to God. But, he has been over there for a couple of months and made a complete turnaround. He is focused on God and is studying the Word.

“The key is having a person of peace in a place of peace. The housing with a purpose is the place, and the person is pastor Jeff. He’s on site, but they can call either of us at any time.”

All tenants must attend worship services, abide by a strict set of rules and regulations, and go through “Living a Life with Purpose Training” led by Elbert, which includes studying A Purpose Driven Life and, if applicable, applying principles from the book, The Only Way Out: Addictions. Each resident also is assigned daily chores to learn basic responsibility and is taught general life skills. The goal is to instill these ideals over a six-month time frame and “graduate” tenants into their own homes with a job and a sense of accomplishment.

“We are providing a safe place for people who wish to better their own situations and improve their lives,” Gettens said. “We understand how hard it can be to start over, especially when you have nothing of your own and nowhere to live.”

While the renovations continue on the residential structures, Elbert and Gettens said the program is mending the neighborhood psyche as well.

Immediately north across the street from the complex are modest, but nicely kept, homes. Some owned by elderly residents.

“The neighbors have come to us and they have told us that this is the calmest they have seen this neighborhood,” Gettens said. “A lot of them who are not believers are beginning to become open to Jesus because of what we are doing.”

“There is a gas station right in front of the property with the cheapest beer in town, and as people walk by all day every day, they see us working, and we are able to witness to them (as they ask what we are doing),” he said.

Most of the renovations have been done by five or six members of the church, which has around 70 members, 60 of whom are active.

“The next step is to get the rest of the units renovated and open,” Gettens said. “One of the duplexes will be turned into an activity center, which will include a chapel, classroom and kitchen.”

The nine-unit complex is arranged in an angular “U” shape in a north Lawton neighborhood, and was once a haven for drug manufacture and use and prostitution.

All of that time-consuming work somewhat hampers the ministry of the church, which is located about a block-and-a-half away, the pastor said.

“While we’re doing the work, it takes us away from our ministry opportunities here at the church, so volunteer mission groups to help with the renovations would be a huge blessing,” he admitted. “We also would welcome donations of materials, such as sinks, toilets, sheetrock, lumber, paint, doors, etc.”

“Financial partners, also to get it up and going for the long haul,” Elbert added. “Partnership is key. We would like to have sponsors for a house providing a certain amount each month. That would take a lot of pressure off of our church. If we could get four or five people to give $500 a month, we will be able to run this facility.

“This is a very important, key ministry in our church; really a church plant, if you want to get down to it. It requires a lot of resources financially and physically, but once it gets going, it’s going to take off. It’s already happening.”

“Rick and Jeff both have a heart to reach their community for the Lord, but not only just a heart and a vision, a lot of people have that,” said Jim Brunk, interim church planting specialist with the Baptist General Convention of Oklahoma. “They have the relationships to do it, also. A lot of times, our churches don’t relate to a people group, and (Rick and Jeff) do. The people they are reaching are transient, and low income, so Rick doesn’t have a lot of resources to fund his vision and the ministry he wants to carry out. He has the heart, the vision and the relationships, he just doesn’t have the resources.”

“We have a waiting list of people wanting to move in,” Gettens concluded. “But, we’re making sure we select tenants who are going to be partners in the program and be willing to do their part, too.

“We haven’t been wrong yet in doing what the Holy Spirit has directed us to do.”