It takes courage to stand for ‘Last Ounce of Courage’ 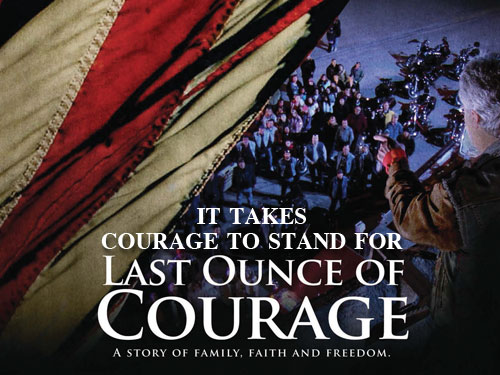 When you hear the name of Jesus in most movies today, it is connected with slang or profanity. But in “Last Ounce of Courage,” Jesus is depicted as a real entity, whose birth is in jeopardy of losing its place in history.

Although as expected, the movie has been proclaimed by some critics as “condescending, manipulative, thuggish and hypocritical,” and “a workmanlike, overblown piece of propaganda,” it is an accurate depiction of what most Christians feel is being done publicly to their faith.

One has to realize if it were not for the birth of Jesus Christ, there would be no Christmas—no gift exchanging (because of the Wise Men bringing gifts to the baby Jesus), no Christmas shopping season, no holiday to take off work, no family get-togethers to celebrate. Christmas benefits many people, whether or not they believe in Jesus and are proponents of Christianity.

This movie simply shows a family weary of secularizing the  profoundly Christian holiday so as not to offend anyone. They are tired of “Winter breaks,” “Happy Holiday” and Christmas carols being rewritten to make them secular.

The movie begins and ends with a quote from President Ronald Reagan calling for everyone to teach their children about American values and freedom.

The story opens with a young soldier saying good-bye to his parents and his pregnant wife. The soldier, Thomas Revere, subsequently is killed in the line of duty, and 14 years later, his widow (Kari) and teenage son (Christian) return to his still-grieving parents’ home.

Thomas’ father (Bob) is a war hero, a Medal of Honor recipient, pharmacist and part-time mayor of a small town, who has lost his will to stand for what he believes after the death of his son. Although his teenage grandson has questions about the father he never knew, Bob doesn’t want to talk about it, until Christian asks why no one will stand up for what is right.

First Bob, then the whole small mountain town of Mt. Columbus work trying to bring the celebration of Christmas back, turning the school “Winter play” into a Christmas production and putting up Christmas decorations. They in turn face the wrath of the ACLU.

The movie ends on a spiritual, heart-rending, patriotic, life-changing note, which some may find “cheesy.” However, with its evangelistic, patriotic story line, it brings many movie goers to tears and a desire to defend a strong Christian, biblical worldview.

At the end of the movie I attended, patrons applauded and didn’t leave until the last credit was shown. Many wiped away tears as they left the theater.

The film, which was co-directed by Kevin McAfee, a member of Bethany, Council Road, is endorsed by James Dobson, Chuck Norris, Texas Gov. Rick Perry, former Ark. Gov. Mike Huckabee and others.

Filmmakers hope “Last Ounce of Courage” serves not only as a source of entertainment, but also more significantly will stir a national conversation on values. To that end, in conjunction with the release of the film, the producers have launched StandUSA, an unprecedented social broadcasting platform that gathers individuals, thought leaders and local and national organizations into an integrated community where they can express and share values.

A film that promotes love, forgiveness, freedom, faith, family, God, liberty, courage and character can’t be all bad. However, that’s not the view of some critics:

“Anyone who objects to a cross or a Christmas tree on public property is portrayed as an enemy of freedom. The idea that the imposition of one religion’s symbols, including a “Jesus Saves” cross, on the entire community might be insensitive, unfair or unconstitutional is portrayed as anti-freedom.”—Nell Minow, “Movie Mom”

“May be the first screenplay transcribed directly from the bumper stickers on your conservative uncle’s pickup truck.”—Sean P. Means, Salt Lake Tribune

“‘Last Ounce of Courage’ isn’t likely to appeal to anyone outside of thin-skinned, conspiracy-minded Christians.”—Robert Abele, Movies Now

On the other hand:

“‘Last Ounce of Courage’ lives up to the billing: A Story of Family, Faith and Freedom. It is inspiring and entertaining, but most of all, it is a call to action for patriots to challenge the powers-that-be who would strip away our religious and civic freedoms.”—Joseph Harris, Canada Free Press

“For a movie that is based on religious freedom in celebrating Christmas, the movie was not preachy or overtly religious in nature. The main concentrated premise was, where has (sic) Americans’ freedoms gone when it creates litigation issues just to say ‘Merry Christmas’ to someone during the season?”—Bettse Folsom, Examiner.com

“My own favorite part of the film is when the mayor tells a news reporter that Muslims ought to be able to pray in the public square.  It was a powerful moment, and a beautiful image of what America ought to stand for. There is a lot of American imagery in the movie—flags, for example—but I believe it is used less as a nationalistic tactic and more as a symbol for what our country ought to stand for.”—Brianna Heldt, Just Showing Up.