DAVIS—Campers at CrossTimbers Children’s Mission Adventure Camp were singing these words during the first evening worship service of Session 10, July 25-28: “I lean not on my own understanding. My life is in the hands of the Maker of Heaven.”

After this praise song, Shane Hall came to the stage to speak as the camp pastor for the session. This was only his third speaking engagement away from his church this year, as the pastor of Del 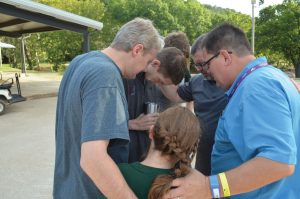 City, First Southern has been experiencing a protracted battle with stomach cancer.

But since he delivered this memorable sermon to thousands, Hall has been consistent in filling the pulpit at First Southern every Sunday and has been to most Wednesday night services.

“I’ve really tried to set some parameters in what I can and can’t do,” Hall said after delivering his first sermon at the CrossTimbers session. “I’ve cancelled a number of events for health reasons. My first priority is to my church in terms of ministry, making sure I’m able to give to them on Sunday mornings. I’ve had to limit myself during the year.”

Hall said this was his fifth time to speak at CrossTimbers, dating back to when the children’s camp was located in McAlester. Because of his relationship with the camp and understanding how effective CrossTimbers is in reaching children with the Gospel, Hall made allowances to fulfill this obligation, which he said was arranged last year.

“I’m sensitive to the importance of it,” he said. “This is one of those events where if I could do it I would do it. It’s that important. Eternity is on the line for these kids to hear the Gospel.”

“Shane and I had a phone conversation last week,” Melton said. “He said he would be at kid’s camp, and I just know how important children’s camp is. I’m so thankful there were some other guys here who could join us (in praying over Hall) because I know our fellow pastors are praying all over the state for him and lifting him up.”

Hall spoke on Rom. 6:23, “For the wages of sin is death, but the gift of God is eternal life in Christ Jesus our Lord.” His well-known humor and fun personality related well to the campers, as he used illustrations of getting a free gift and earning something undesirable.

Staffers and counselors were supportive as they have been all summer in connecting the Gospel with CrossTimbers campers. The summer staff members have made it a point during recent sessions to form a prayer circle during the invitational time of the evening services. When campers come forward, trained counselors from respective churches meet with campers one-on-one in helping them with spiritual decisions.

Early reports from the CrossTimbers program office said 11 campers made spiritual decisions that night, which is more than usual for the opening worship time. Hall gives God the credit for 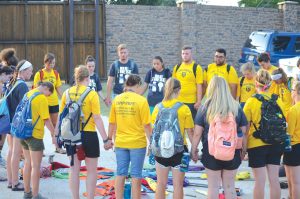 speaking the truth with the children and for having the strength to preach.

“There’s something about being able to preach that energizes you,” Hall said. “I want to do it. It’s the calling God’s placed on my life, so anytime you can do what God’s called you to do there’s not just energy, there’s empowerment through the Spirit. And God gives you what you need.

“That doesn’t mean you don’t need to be wise in stewarding your body,” he continued, “but He does give you the energy when He lays a task before you. I’ve seen Him do that over and over again where I’m not 100 percent, but when I do have the opportunity to preach, the Holy Spirit empowers that. It’s not that I preach any better or I don’t preach near as well, but I have the strength to do it.”

Hall said he has no future speaking opportunities planned, other than his obligations to his church. In the meantime, he is placing his life in the hands of his Maker.