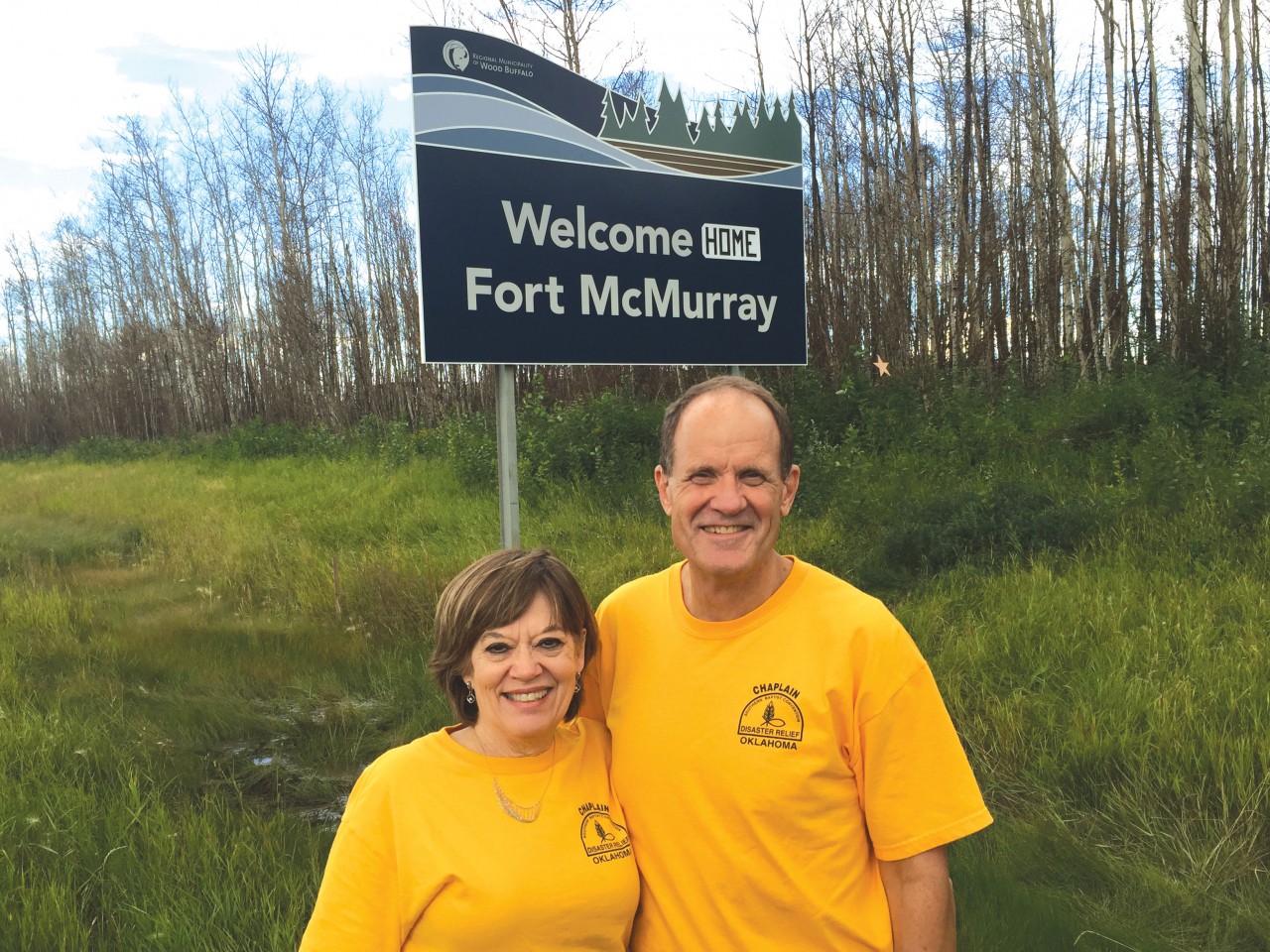 David and Brenda Ross have taught a young adult Sunday School class at Broken Arrow, First for five years and, like many Southern Baptists, felt like they were fairly involved in their local church and in tune with the imperative set forth in Matt. 28:19 for believers to share the Gospel. However, David says their recent service as chaplains in Fort McMurray, Alberta really opened his eyes to the importance of the Great Commission.

Traveling to Canada was a life-changing experience,” Ross said Nov. 15 after he and his wife were named Volunteer Chaplains of the Year during the chaplains’ luncheon at the Annual Meeting of the Baptist General Convention of Oklahoma (BGCO). “Something I have learned over the past 18 months is that being chaplains puts us in the position to do what we really should be doing all of the time anyway, and the trip was an example of that. My wife did an incredible job, and as people told us their stories, their comments led us into opportunities to share the Gospel with them.”

The entire population of Fort McMurray—88,000 people—were ordered to evacuate their homes after a wildfire engulfed the area on May 3. In June and July, BGCO disaster relief volunteers spent weeks there helping residents dispose of refrigerators and freezers left behind during the rapid evacuation.

“One of our purposes for going up there was to follow up with people our disaster relief volunteers ministered to immediately following the fire,” said Ross, who retired in June 2015 after a 41-year career as a claims manager for State Farm Insurance Co. “Our teams went up there thinking they would be doing ash out or ash-sifting jobs, but because of things beyond their control, they didn’t do much of that. They ended up moving refrigerators and freezers out of residences that had been abandoned.”

“We visited every family our volunteers had served, and there was immediate recognition and appreciation for everything they had done. We asked them how they were doing, prayed with them and invited them to church. The town is highly unchurched. The population is the most diverse culture I have ever encountered.”

“God opened the door for ministry there when a man offered to pay the $1,500-per-month rent for a 600-square-foot basement apartment for three months for our volunteer chaplains to live in,” Williams said. “He decided after our disaster relief volunteers left that a greater evangelical presence was needed there, and he offered to pay rent for an apartment for the chaplains to come back.”

The Rosses volunteered to be the “tip of the spear,” along with Williams, and the trio drove for four days to deliver a truck to Fort McMurray the first week of August.

“As we drove the truck there from Oklahoma, I got to know the Rosses very well,” Williams said. “One of their sons-in-law was an excellent baseball player who signed a contract with the Texas Rangers out of high school. He played several years in the minor leagues. When we got to Fort MacMurray, our upstairs neighbor, Andrew, turned out to be the athletic director for all of the youth baseball teams in the city. He was raised by a single dad, and wanted to go to college, but his dad didn’t have the money to pay for his education, so he told him he would have to get a scholarship. So, he did get a scholarship—in baseball—at the University of Oklahoma! And, David Ross knew the coaches who had coached Andrew in Oklahoma, so they hit it off right away.

“Andrew had a girlfriend who came out of a Mormon background. And, we— Brenda mostly—spent hours witnessing to Monique. When we first went up there, I tried to temper their expectations. I pointed out it was Canada, there aren’t very many Christians, and there isn’t a huge evangelical influence, so all we might be doing is plowing ground, and don’t expect any fruit.

“Andrew, from that first Sunday we were there, went to church with us every week. And, the week after the Rosses left, Monique prayed to receive Christ.”

The Rosses have been married 44 years, and when the appeal went out for chaplains who would be willing to go on a long-term assignment to Canada, they felt called to go as a couple.

“We had tried to go on a short-term trip, but that didn’t work out,” David said. “It was a wonderful husband-wife experience, because I could do things with Brenda alongside me that I could not do by myself. For example, a lady at an office supply store helped us develop a business card for the church. We gave her one of the cards after she helped produce them, and asked her if she was attending church anywhere. She said, ‘No, but I have really been thinking about it.’ So we asked her if she would be willing to meet with us. I would not have been able to meet with her alone, but having my wife with me made that possible. So, we met with her for lunch, and Brenda was able to share the Gospel with her.”

Brenda also used her gift of hospitality to minister to others.

“She prepared several meals while we were there, and we invited neighbors or others to the apartment,” David said. “We also took meals twice to a family who had lost a child, so it was a great way to minister to people. Brenda was a great hostess while there to help meet the needs of many people.”

David said the couple’s 17-day trip to Canada—and a 10-day solo trip he made later—have changed their view of the Great Commission.

“We thought we had a high level of engagement in our local church, but never before had Brenda and I practiced the Great Commission like we did there,” he said.  “The verb tense in the Great Commission is actually ‘as you go.’ We usually say go ye therefore, but in Fort McMurray, as we went, whether it was in restaurants, retail stores or the community recreation center, we were looking to make a connection with someone to share the Gospel and get them engaged in  the local church. That has made us both more sensitive to doing the same thing after we returned to our home environment.

“And, we have every intention of following up with Andrew and Monique, with whom we have developed a very close bond. Before we left, Brenda gave Monique a Life Application Bible, and she is using it to develop a deeper relationship with Lord as a result.”