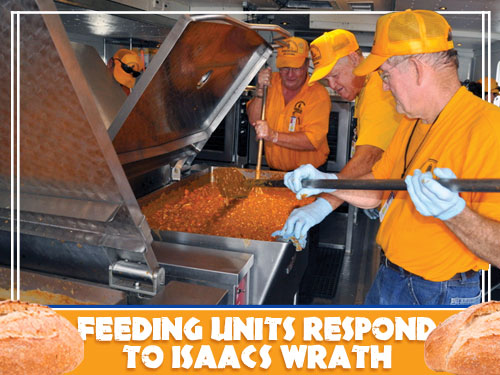 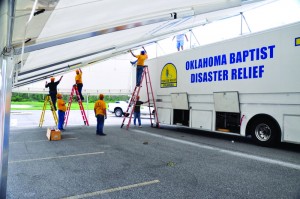 Disaster Relief volunteers setup an awning next to a mobile feeding unit.

WESTWEGO, La.—Oklahoma Southern Baptist disaster relief volunteers are anchored at a sports complex in this community adjacent to New Orleans providing meals to victims and volunteers responding to the ravages of Hurricane Isaac.

“I returned Sunday night (Sept. 2) from New Orleans, and the need for disaster response is still great there,” said Sam Porter, disaster relief director for the Baptist General Convention of Oklahoma (BGCO). Porter led the initial team of about 60 Oklahoma volunteers into the New Orleans area on Aug. 30.

The BGCO’s No. 1 feeding unit and the Bryan Association feeding unit are set up on the parking lot of the John A. Alario Sr. Event Center in Westwego. Together, the two feeding units have the capability of cooking 35,000 meals per day.

As of Sept. 5, the Oklahoma volunteers had prepared 28,000 meals to serve in the three hardest-hit parishes in the New Orleans area— Plaquemines, St. John the Baptist and Jefferson—where the rain associated with Isaac resulted in more flooding and residential damage than that caused by Hurricane Katrina seven years ago. Much of Plaquemines remained under five feet of water a week after the storm passed through the area. 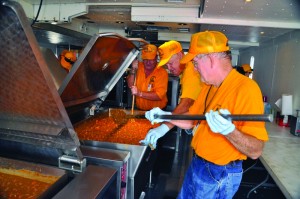 “I am predicting about two more weeks of food service,” Porter said in an update issued to prospective volunteers on Sept. 5. “Strangely enough, there is not much tree damage, so no chain saw crews are needed this time.”

However, feeding crews will be needed, Porter stressed.

“Volunteers are still needed to work the feeding operation,” he said.  “We need a crew of 40 to leave at 8 a.m. on Sept. 13 from Boys Ranch Town in Edmond. We must not fail our neighbors in need or the Lord when He has called us to serve.”

“They will serve at least three weeks with (team) rotation each week,” he said.  “The units will be housed overnights in Westwego with the feeding team and work each day about 20 minutes south in the town of Lafitte, which had much flooding and roof damage.

“The tarping and mud out teams will be working with Pastor Eddie from Lafitte, First, which sustained major damage, including having its roof collapse and the steeple fall into the sanctuary.”

Porter said tarps will be placed over the roofs of wind-damaged homes, while mud out teams are cleaning out once flooded homes.