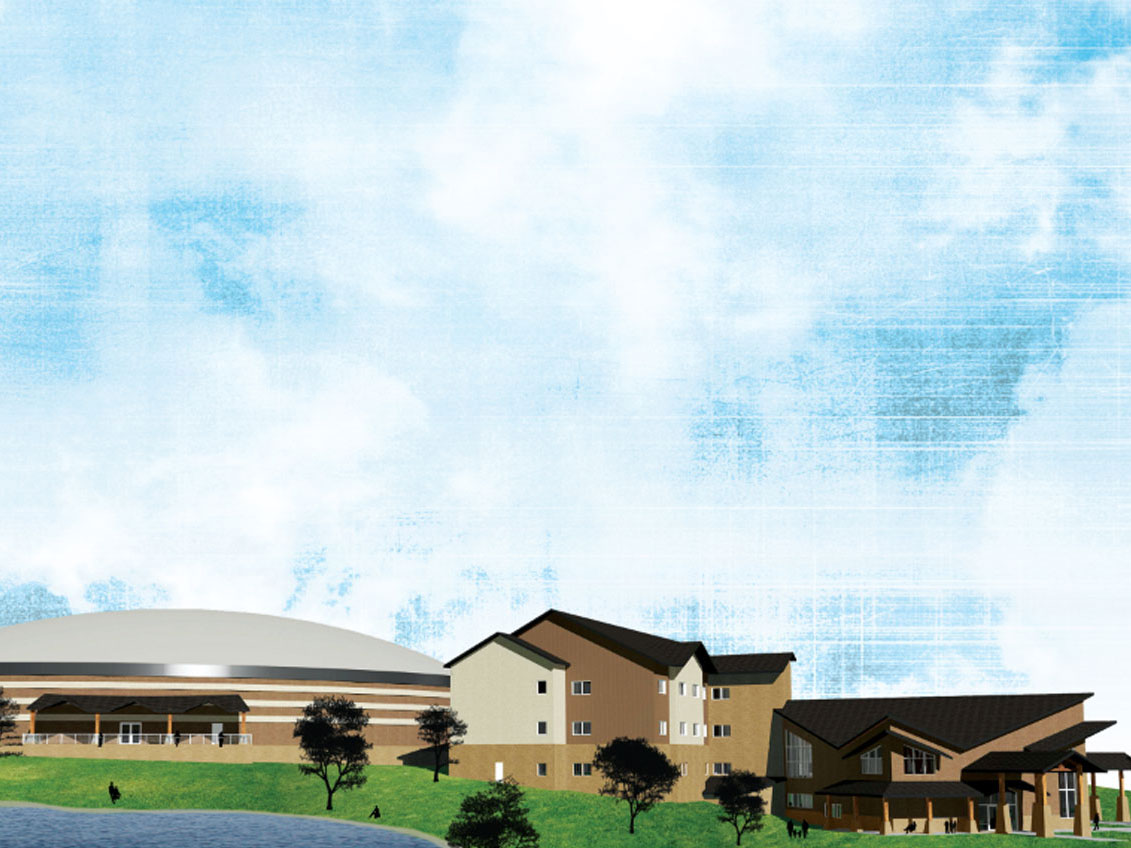 At the February meeting of the board of directors of the Baptist General Convention of Oklahoma (BGCO), the directors approved construction plans for Falls Creek Baptist Conference Center and the launch of a capital campaign.

Named the Falls Creek Centennial Campaign, the project will pay off the existing $2.52 million debt of the R. A. Young Tabernacle and complete the funding of the construction of the Mathena Family Event Center, the Thompson Family Lodge and the Jordan Welcome Center, among other key improvements.

“We don’t want to build buildings just to build buildings,” said Anthony L. Jordan, BGCO executive director-treasurer. “These facilities will greatly enhance Falls Creek’s capacity to share the Gospel, and to have events, retreats and other ministry functions during the non-summer months.”

During the same day of the vote, Jordan announced to the board a $2.3 million matching gift from Gene Downing and his wife, Jo. “Every dollar given… they will match it, up to $2.3 million,” Jordan said. “This matching gift will be the catalyst for seeing the projects finished and the debt retired on the tabernacle.”

According to Jordan, the Falls Creek Centennial Capital Campaign will fund what has not already been raised toward other new construction.

“The Centennial Capital Campaign will raise $4,762,142, plus a challenge goal to be announced that will raise funds to make other needed improvements,” he said.

“Phase Two of the Falls Creek Centennial Campaign includes the remodel of lodges one and two, a remodel of the Moorer Lodge, as well as work toward a Central Plaza and Recreation Fields pavilion,” said Jordan. “We do not know an exact dollar figure for these, but have all the faith that God will provide through His people the funds we need to complete these projects.”

“I have run out of adjectives to describe the ways God is blessing Oklahoma Baptists,” said Jordan.

“The reason we do all that we are doing is because every time we build a facility, that gives us the ability to expand our ministry,” said Jordan, “We have the opportunity to share the Gospel with people that they might come to know the Living Savior you and I worship and serve. The fact is, we build these buildings so that we can train and develop people to walk with Jesus every day.”

Q: What is the financial goal of the Centennial Capital Campaign?

The Centennial Capital Campaign will raise $4,762,142 toward new construction at Falls Creek plus the elimination of the Tabernacle debt. There also will be a challenge to raise funds to make other needed improvements at Falls Creek as part of Phase Two, which include the remodel of the Moorer Lodge, and the building of a Recreation Fields Pavilion.

Jordan reminded the BGCO Board of Directors that prior to the Centennial Campaign’s launch, approximately $10.7 million has already been pledged and given toward the new construction projects at Falls Creek.

Q: What projects and new construction is included in the Centennial Campaign?

The Centennial Capital Campaign includes the elimination of the Tabernacle debt and the raising of the balance of the cost of the building of the new construction. Recall that the BGCO Board voted to construct the Falls Creek Mathena Event Center, Thompson Lodge, and Jordan Welcome Center.

Q: How will these buildings be used?

“We do not build buildings just to build them,” said BGCO Executive Director-Treasurer Anthony L. Jordan. “These buildings will enable us to share the Gospel with many people and host a wide variety of events at Falls Creek throughout the year, not only during the summer months. These events include leadership and marriage retreats, ministry training opportunities and church events, all in addition to existing major events now hosted at Falls Creek, such as the annual Women’s and Men’s retreats.

Until this point, Falls Creek has lacked an adequate space to host intermediate to large groups of people (ranging from 500 to 2,500), as the Mathena Event Center will now facilitate. The Thompson Family 50-room Lodge will also be useful for a variety of events, and the Jordan Welcome Center will create a new “front door” and central point of information and arrival at Falls Creek like never before.

Q: How much debt remains on the Tabernacle?

The construction of the Tabernacle has $2,522,142 of outstanding debt, at the time of the printing of this article. The $2.3 million matching gift will accelerate debt reduction.

Q: When is the 100th anniversary of Falls Creek?

In 2017, Oklahoma Baptists will celebrate the 100th anniversary of Falls Creek, the largest youth encampment in the world. Several events will be planned by a volunteer committee and the BGCO staff that coincide with the anniversary and commemorate the changed lives and fruitful, abundant blessing of God at Falls Creek.

Q: How has God recently blessed the summer weeks at Falls Creek?

In the summer of 2013 alone, Falls Creek recorded 2,149 professions of faith, 723 calls to ministry, 263 assurances of salvation, 2,543 rededications and 507 special needs or other decisions. These statistics reflect the lives of real young men and women.

Q: What are some ways to give?

“To reach the goal, God will move many different people to give at many different levels,” said Marty Harkey, Chief Development Officer for the BGCO. One popular option is the “Save-A-Seat 2017 sponsorship, whereby donors give $500 toward Falls Creek and place an inscription plate on a seat in the tabernacle, and remember with the Downing Matching Gift funds a $500 donation is doubled to $1,000. Any other amount you give to Falls Creek is doubled as well. So a $5,000 gift becomes $10,000 and a $50,000 gift becomes $100,000 and the Downing Matching will keep on giving up to a total of $2.3 million. ”

Q: Where can people get more information?

* This Just In: The Mathena Family has generously agreed to fund this portion, thereby completely funding the Mathena Family Event Center and bringing their total giving toward the project to an astounding $7.43 million.