Fair chaplains reach out to ‘subcultures’ 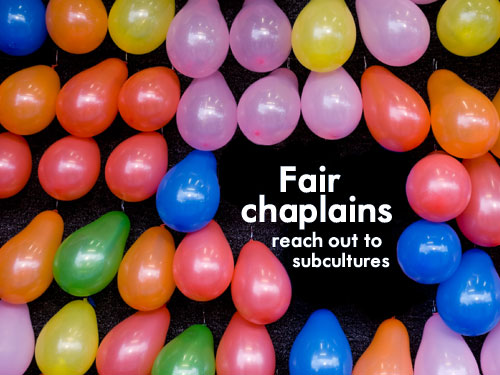 Jack and Phyllis Poe sold ham and cheese sandwiches at the State Fair of Oklahoma in 1987 as they ministered to fairgoers as a chaplain couple.

A year later, Baptist General Convention of Oklahoma Chaplaincy and Community Ministries specialist Joe Williams asked them to join him in starting an expanded chaplaincy ministry at the fairgrounds.

“It was me and Jack and Joe and a telephone!” Phyllis Poe laughed as she cruised by a food booth on a golf cart at the 2012 State Fair of Oklahoma. “We had a desk and a telephone, and we were sitting in the lobby of the art center near here. That’s how we started. Then we got a trailer, which we shared with EMSA, and were situated out in a field. The Red Cross, water department, police department and fire department were all stuck out there together in a field of mud.

“We started out ministering to the carneys. We had food and clothing and shoes and blankets. Once they (fair officials) moved us from there into the other end of what is now the garden building, we didn’t have room for all of that—I could keep blankets, but not clothing.”

Now, in the 25th year of what is termed the Chaplain’s Corner in the fair’s Safety Building, the Poes coordinate some 90 or so chaplains who minister to a diverse set of people who make up several subcultures that comprise the fair’s internal “populace,” if you will.

The carneys—migrant workers who travel the nation with the big shows and often fight the stigma of a “seedy” reputation—receive snacks and personal hygiene items in “care packages” from chaplains who go to them in the mornings and then stop by later in the day for personal “face” time.

“And, if they need something special, I call the Baptist Mission Center and they bring it to us for them,” Phyllis Poe said.

The personal touch is all part of building relationships, something all fair chaplains focus on.

“Our ministry has evolved, but it has stayed the same in some ways,” Phyllis continued. “The hard thing is to get chaplains to serve every day at the same time. The most effective thing I have is when a chaplain comes and serves in the same building every day, and I have just a few who can do that.

“If they can go to the same building every year, it allows them to build relationships with the people who come back to those buildings year after year,” added Jack, who estimated the Chaplain’s Corner has been going strong in the Safety Center for close to 22 years.

The Safety Center is  a central gathering place for fair employees, including their own security officers who transport cash, EMTs, fire personnel, police officers and other groups, such as the Red Cross.

“It’s been a pretty calm fair this year,” Jack Poe said. “Controlled access has helped a lot with the perimeter lined with steel fences and gates.”

A visible police presence is a huge deterrent, too, he added.

“The big change has been the (Police) gang unit, which watches for the gangs, and when they come in and begin to congregate, they get sent out,” Jack said. “The last several years, we haven’t a lot of trouble with the gangs as a result.

“Also, we used to have a lot of trouble when there was a higher sale of alcoholic beverages, but that’s been stopped, and it’s a pretty safe fair, anymore.”

Safe for those subcultures which combine to make the annual state fair basically a small city.

“We have the rural people who bring in their animals to show their livestock and compete in the rodeo,” Jack said.  “Then we have the exhibitors who come in to sell something. That’s a different subculture. They come in from all over the country.

“Then we have the Midway, and that’s certainly a different culture in itself, too, with those who run the rides and operate the games.

Poe paused for a moment, then quickly added a fifth subculture that came to his mind—the fairgoers themselves.

“It’s really like running a small city. There are days when it’s tough keeping everybody on the same sheet of music, so to speak.”

One chaplain who has been volunteering for about six years at the fair is Rodney Jones, a member of Oklahoma City, Putnam City.

He usually strolls through the Modern Living Building, but roams into adjacent buildings as well, visiting vendors with whom he has established a relationship.

“But, I’m not here strictly for the vendors,” said Jones, also a disaster relief chaplain. “I have had people snag me—because they have seen my chaplain lanyard—and ask me to pray for them because they have some issue going on in their life.”

Thomas McCaslin and his wife, Lisa, from Newalla, members of New Hope Cowboy Ministry in McLoud, were in their second year working the fair this year.

“We’re seeing people we saw last year who we made some rapport with who are really happy to see us,” Thomas said. “But, we’ve met some new folks, obviously, because not everybody comes back, and we’re absolutely here for them.

“We approach the vendors and workers and ask them how their day is going, if there is anything they need and can we can pray for them about anything they’re having struggles with. You know, just the other evening we prayed for a couple of workers we prayed for last week. They turned around and asked us if they could pray for us and for everything we were doing.

“I was like, ‘Yeah, we’ll receive that.’ I tell you, this fella and gal laid it down for us, and I left there with goosebumps. Being here is a blessing. We get to pray for them, but, honestly, it’s a blessing for us.

“I’ll be glad when it’s over, to be honest, because my legs can take a break. We do a lot of walking, but to do what we’re doing, I look forward to next year.

“We welcome the opportunity to serve the Lord.”