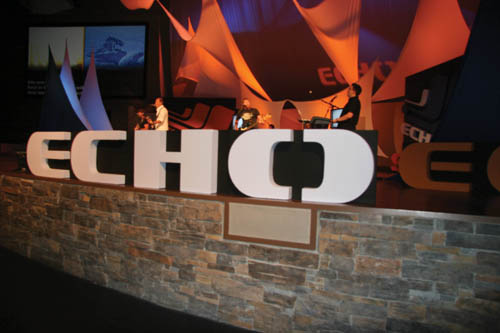 DAVIS—If youth leaders have their way, Falls Creek will “Echo” throughout Oklahoma long after the eight weeks of youth camp at Falls Creek Baptist Conference Center are history. As about 7,000 students and sponsors gathered for the opening week June 1, they experienced the first echoes of learning how to follow God in their daily lives through practicing spiritual disciplines with their friends.

“Our goal is for the spirit of Falls Creek and what these students learn this summer to carry over to the next school year and beyond,” said James Lankford, Baptist General Convention of Oklahoma student mobilization and Falls Creek program specialist.

With that as a major thrust, BGCO youth and student specialists Andy Harrison and Norman Flowers are spending two nights each week offering training and encouragement for church staff and adult volunteers who work with students year around. The leaders meet on Tuesday and Wednesday evenings during the Evening Tabernacle Experience from 7:45 to invitation time to allow them to help with the invitation.

The leaders were urged to help organize Echo groups among students who will encourage each other in their application of scripture, prayer, acts of compassion and moral life.

Flowers encouraged the leaders to write down mission opportunities in their areas so they will be able to help students find places of service in their communities.

He also suggested celebrating with the students who come to know Christ at Falls Creek.

“How to you take that next step of baptism, get them involved and start to disciple them?” he asked.

He told the leaders that one church set up a portable baptistry in front of the town’s movie theater. He also suggested churches could adopt schools and make them their mission fields.

Harrison noted on his bicycle journey from the Panhandle to Southeast Oklahoma, he was making aware the 347,000 students in Oklahoma, with 47,000 on Southern Baptist church rolls, but only 19,800 active each Sunday.

Lankford said the training opportunities for youth leaders each week could result in the largest training event in Oklahoma with a possibility of as many as 4,000 workers being trained.

Also new this year is a teacher/secondary school fellowship scheduled in Massey Chapel following the Evening Tabernacle Experience every Thursday.

“It is an informal time for sponsors who are middle or high school teachers, faculty members or administrators, allowing them to network with other school faculty,” said Lankford. “We want to encourage them to live out their faith on campus and be an encouragement to students. We are also giving them ideas about supporting Christian students on their campuses.”

Evening Tabernacle speaker the first week was Scott Dawson, evangelist from Birmingham, Ala., who was one of the last speakers in the old open-air tabernacle.

On Tuesday night, Dawson preached a message from John 3:16, telling the students simply that God loves them.

“You may have heard that all your life, but the difference is, I’m not telling you; Jesus is,” Dawson emphasized. “You can take that to the bank, because if Jesus spoke one lie, He would no longer be God.”

Dawson told the story of Madalyn Murray O’Hair, who led the campaign to take prayer and Bible reading out of schools.

“She said she could prove God doesn’t exist,” related Dawson. “She was pregnant, and during a thunderstorm, she ran outside shouting that she could prove there is no God. She got on her knees and said, ‘God, if you exist, strike me and my baby dead.’

“She had better be glad I’m not God. I would have gone ‘pow’ and eliminated her, but God said, ‘I love you.'”

Dawson said O’Hair had a beautiful baby boy, but the child never heard the words “I love you.”

“Twenty years later, he was getting ready to commit suicide, when, as a last ditch effort, he turned on the TV and heard evangelist Billy Graham say ‘God loves you,'” Dawson said. “He had never heard that. He ran to a corner store and bought a Bible. He did it so fast that Graham was still preaching when he returned home. He knelt by his bed and prayed to receive Jesus.”

Dawson told the students God has gone on record to prove how much he loves them.

“He gave His only Son,” he reminded them. “In the last 24 hours of Jesus’ life, He went through six trials. His disciples deserted Him.

“The crowd wanted Him crucified, but Pilate knew He was innocent, so he compromised by having Jesus flogged.”

Dawson said he is tired of people watching gore in movies and saying the beating of Jesus is too gross.

“Those movies are fiction, but Jesus going to the cross is real,” he declared. “There’s no possible way you can say ‘no’ to a God like this.”

Dawson added that there is a purpose in God’s love—”He doesn’t want you to perish.”

“If you reject God tonight and something happens to you, the Bible says you will spend eternity apart from God in hell, Dawson stressed. “Do not walk out these back doors until you open your heart and say ‘yes’ to Jesus.”

On Wednesday morning students across campus heard the bell in front of the tabernacle chime 80 times—for the 80 people who made professions of faith during the first invitation at Falls Creek 2009.