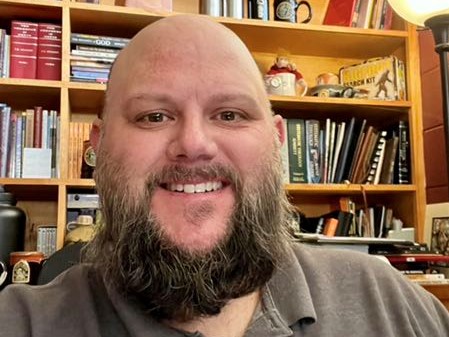 David Coffey not only maintains a relationship with students at Oklahoma Panhandle State University (OPSU), but he also strives for close relationships with faculty members, including the president of the university and coaches of the athletic teams.

As Baptist Collegiate Ministries (BCM) director at the western-most university in Oklahoma, with more than 1,700 students on a 120-acre campus located in Goodwell, Coffey realizes he can minister to more than just those who visit the BCM building, which is located off campus.

Panhandle State sponsors 11 sports, and Coffey leads devotions with many of the teams.

“The relationships with the sports teams is due to the work of my predecessors, Matt Townsend and Jay Kindsvater, who laid the foundation before I got here,” Coffey said.

Not too long ago, the Panhandle State men’s basketball team, in partnership with local Fellowship of Christian Athletes (FCA) groups, hosted a public event game day filled with fellowship and basketball.

FCA groups from around the Panhandle area gathered at the Hughes Strong Auditorium on the OPSU campus to take part in a worship and praise session prior to the home basketball game later that day. Coffey was asked to give a sermon during the event.

When Coffey began his tenure almost six years ago, he got the opportunity to share a word from the Bible and to pray with the football team and the men’s and women’s basketball teams. He said he worked hard to establish trust with the coaches, making sure they knew he genuinely cared for the athletes and for the coaches.

“As I pray with them, I believe they see I want what is best for their programs,” Coffey related.

Over the last few years, Coffey has added devotion times with the baseball, softball and volleyball teams, as well as with the cheerleading squad.

Coffey said he shares in his visits with the coaches how important it is to have a relationship with Christ.

He said when student athletes are committed to Christ, coaches don’t have to worry about whether or not they will miss curfew or if they are out drinking and partying because they are trying to live a life for Christ.

Coffey said several students have made professions of faith in Christ. He also revealed that athletes have come to him for prayer and encouragement.

“It’s encouraging to me that they understand that we are here for them, that the BCM is a place that is safe for them to come and be themselves,” he said.

He noted that many of the student athletes attend the weekly lunch at the BCM, which averages 180-200 students a week. He added the BCM moved its weekly Bible study from Thursday nights to Monday nights, which are more convenient for student athletes.

Coffey said every year, he tells the athletes that the most important thing they will hear all year, even more important than what they hear from their professors, their coaches, from anybody, is that “God loves you.”

“When I first got here in 2016, I had the opportunity to pray with the president, and we met two to three times a semester to pray together,” he said.

Panhandle State recently hired a new president, and Coffey’s prayer is that the BCM will continue to have a great relationship with the faculty, staff and new president.

David Coffey was featured in the 2022 Missionary Prayer Guide for Oklahoma Baptists. To see more information about his ministry, visit oklahomabaptists.org/cp