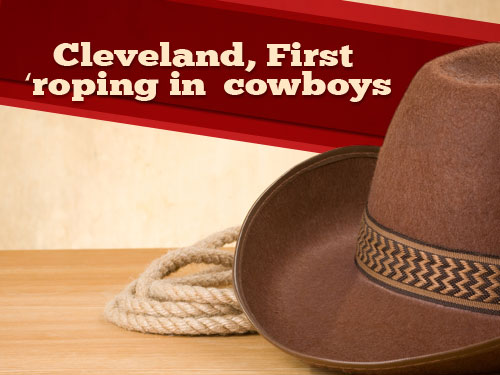 A play day at Cleveland, First may consist of barrel racing and roping at the church’s arena.

That is just one way the church is reaching out to the working cowboy as well as those who just enjoy the cowboy lifestyle.

Cleveland, First relocated about 10 years ago to a 40-acre tract of land that was part of an old ranch. On that land is the Baptist Village Community and an arena, which the church uses for its annual Ranch Rodeo.

“A lot of the working cowboys don’t go to church anywhere, so we try to connect with them, and do it through the Ranch Rodeo,” said Pastor Greg Hall.

Hall said the church is not interested in starting a cowboy church, but wants to bring the cowboys into the traditional church.

They are doing that through a cowboy fellowship, which is an arm of the church. The cowboys meet separately once a month on the fourth Monday night.

“If we started a separate church, I think it would take away from the fabric of the church, as far as God piecing us together from all walks of life and different cultural backgrounds,” said Hall.

From the cowboy fellowship, which began in May 2010, six families have joined and are members of the traditional church, Hall said.

Hall said five from the cowboy fellowship have been baptized.

“I’ve had cowboys involved in church everywhere I’ve been pastor,” Hall related. “There’s a spirit out there that says cowboys will not come to church, but I disagree with that. I run cattle myself.”

Hall said his father was pastor in Burns Flat when he was growing up, and “everyone of our deacons were ranchers.”

“They were cowboys, and they were part of the church,” he said. “That’s the inheritance I have as a Christian. Christ is the One who unites us together. We use this as a tool to get into that culture, but also to keep Christ as the center.”

Hall emphasized that a lot of the working cowboys are not being reached.

“Their culture is different,” he noted. “They are a little hard-nosed. They go by their word and a handshake.”

Hall said there are large ranch operations all around the church, and the environment is not necessarily a Christlike environment.

“They work on a lot of Sundays,” he explained. “We use the fellowship as a draw for them, just like other cultural groups you are trying to connect with.”

Last year was the second year for the annual Ranch Rodeo, which attracted about 2,000. Following the rodeo, the church hosts a meal, where awards are presented.

“This year, we gave Life Application Study Bibles to first – and second-place winners, and I presented a brief message and the plan of salvation,” Hall said. “We passed out cowboy Bibles at the rodeo, and a lot of those guys asked for Bibles for others on their ranch.

Cowboy fellowship meetings consist of a meal, music, which is “western swing to southern gospel,” and a gospel message.

Already the fellowship is reaching out to minister.

“We went to the calvacade in Pawhuska, which is the largest amateur rodeo, to do a service there,” Hall said. “We also did a rally, and several from our cowboy fellowship were there specifically to minister.”

In addition to the cowboy fellowship, Hall said the church is looking to target motorcyclists at some point, and is working with a small country church that is about to close its doors to be a satellite church.

“We have stepped in to help keep them going, and have an 8 a.m. Sunday worship service there,” he said.

To emphasize the ministry to cowboys, the church recently hired a youth and outreach minister, an OBU graduate who was raised on a ranch in Beaver.

“They think it is a rich church, but we have people from every walk of life,” he said. “In our church on Sunday morning, we have everything from tennis shoes to boots and jeans to people in suits. That’s the way the church should be.”