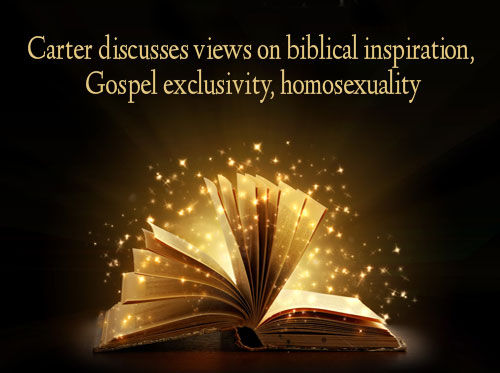 LOUISVILLE, Ky. (BP)—A prominent seminary president had the rare opportunity to engage a former president on his beliefs surrounding the importance and interpretation of the Bible.

Mohler’s questions focused on Carter’s love for the Scriptures along with how the Bible functioned in his calling as an elected official and ultimately, as president of the United States. Carter became known for the outward expression of his faith at a time when evangelicalism was derided as anti-intellectual.

When asked how he understands the inspiration of Scripture, Carter replied, “I think all of the Bible is divinely inspired, but it was interpreted . . . by fallible human beings, who were constrained by their knowledge of facts about the universe, for instance, when they wrote.”

Carter went on to say that he believes in the biblical miracles, but even if he didn’t, “I would still believe in Christ as my Savior. I would still try to pattern my life and my own fallible human ways after Jesus’ life.”

Carter stated, “Well I have to admit, Dr. Mohler, that I’m kind of selective on that point of view. I turn almost exclusively to the teachings of Jesus Christ, who never mentioned homosexuality at all as a sin. He never condemned homosexuals, and so I don’t condemn homosexuals. At our little church in Plains (Ga.), we don’t ask, when people come to join our church, if they’re gay or not. We don’t ordain, we don’t practice marriage between gay couples in our church, but that’s a Baptist privilege of autonomy of local churches. I’m against any sort of government law, either state or national, that would force churches to perform marriage between gay people, but I have no objection to civil ceremonies. And so, I know that Paul condemns homosexuality, as he did some other things like selfishness that everybody’s guilty of, so I believe Jesus reached out to people who were outcast, who were condemned, brought them in as equals and I also pretty well rely on Paul’s writing to the Galatians that everyone is equal in the eye’s of God and we’re treated with compassion. And I personally believe, maybe contrary to many of your listeners, that homosexuality is ingrained in a person’s character and is not something they adopt and can abandon at will. So I know what I’ve just explained to you might be somewhat controversial, but it’s the way I feel.”

Carter went on to explain his views on abortion: “I have one problem in my political service with my faith and that is concerning abortion. I have never believed that Jesus Christ would approve abortion, so I had to interpret my duties as president compatible with the Supreme Court ruling in Roe vs. Wade, but with my religious beliefs, I did everything I possibly could to minimize a need for abortion by liberalizing adoption services and by starting a (federal) program —it’s still in existence, by the way—called Women and Infant Children. One of the key reasons for abortions around the world is when a pregnant mother doesn’t think she and her baby will be cared for. So I did everything I could to minimize abortions because I don’t believe Jesus would approve of a liberal interpretation of that law.”

Asked what his understanding is concerning the Gospel and the necessity of personal faith in Jesus Christ to be saved, Carter replied,  “I teach every Sunday in my classes that it is necessary for full salvation and acceptance before God to believe in Jesus Christ. The question then comes up, though, ‘However, how about the people that don’t know about Christ? How about the ones to whom Christians, evangelicals, have never reached or given them the message?’ And I don’t feel constrained, Dr. Mohler, to condemn those people as lost or as going to hell, and I rationalize it, perhaps, in using theological terms, in using biblical terms, by Jesus’ admonish that we should not judge other people, but let God be the Judge. So, in a quandary like that about people who don’t know about Christ, what would be their fate? I’m inclined to believe that they will not be condemned or punished by God.”

Carter has had a fractious relationship with the Southern Baptist Convention. Mohler provided Carter the time to express his feelings on the convention, which Carter distanced himself from as the denomination grew more conservative. He has gone so far as to call the denomination’s complementarian views on human sexuality and gender “discriminatory.”

Carter told Mohler, “I really became concerned about the basic thrust of the Southern Baptist Convention on two or three issues that happened in Florida in the Convention when (the annual meeting) was there, in particularly, the status of women. I feel very strongly, in the eyes of God, women are equal to men and to choose the particular passages that say that women have to be subservient to men and that they should not teach men and boys, I think it contrary to the basic thrust of what Christ meant and said. I know that you have a different belief in that and Southern Baptists do as well. My wife happens to be a deacon in our little church in Plains that I’ve described already. We have two pastors—one is a man, and one is his wife. They both are ordained and I participated in the ordination, so I believe that throughout religious faith women should be treated equally with men.”

Though professedly different in many of their views, both Mohler and Carter expressed appreciation for each other. Carter went so far as to express the need for further conversation with Mohler, albeit in a more private setting.

Mohler, who typically ends his program with commentary, cast Carter’s view of the Bible as problematic.

“President Carter speaks warmly of his love for the Bible, but he also reveals a view of the Bible’s inspiration and authority that rejects inerrancy and opens the door for what he describes as a ‘selective’ application of the Scriptures when it comes to many issues,” Mohler said.

Mohler continued, “There have been several twists and turns in terms of the last several years in which I have found myself at odds with the former president, often engaged in public controversy over matters that both of us consider to be of very grave importance. When you have that kind of public disagreement, much less with a former president of the United States, there are risks in any kind of conversation. That is what makes me all the more appreciative of President Carter’s willingness to enter into this conversation and for his remarkable candor and honesty throughout the course of the conversation. President Carter is a man of intellectual integrity.”

Mohler, though, expressed deep concern over Carter’s use of the Bible, calling his approach “neo-orthodox”—a type of interpretation often associated with 20th-Century theologian Karl Barth. “As he made clear in this conversation,” Mohler said, Carter doesn’t believe in plenary verbal inspiration, meaning that Carter doesn’t believe every word of the Bible is inerrant.

Mohler contrasted Carter’s view of the Bible with his own:

“I believe that the Scripture is the inerrant and infallible Word of God. I believe that God inspired men, yes, and the writers of Scripture as Scripture says of itself, to write in such a way that they were preserved and protected from all error such that when Scripture speaks, God speaks. That puts a constraint upon us that does not allow the kind of selectivity that we could just claim as an interpretive principle.”

“I believe that Scripture very clearly does say that there is a dual destiny,” Mohler said. “The differentiation of which has to do solely with whether one has come to a saving knowledge of the Lord Jesus Christ. The Apostle Paul in Romans 10 says that ‘All who call upon the name of the Lord shall be saved.’ But then it makes very clear that those who are saved are those who indeed hear the Gospel and respond to it and believe.”

The Mohler-Carter discussion, along with a transcript is available at http://www.albertmohler.com/2012/03/26/tip-temp/. The audio also is available on iTunes.

Andrew Walker writes for the Institute on Religion & Democracy (theird.org), where a version of this story first appeared.