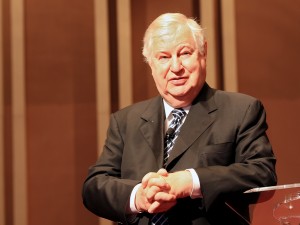 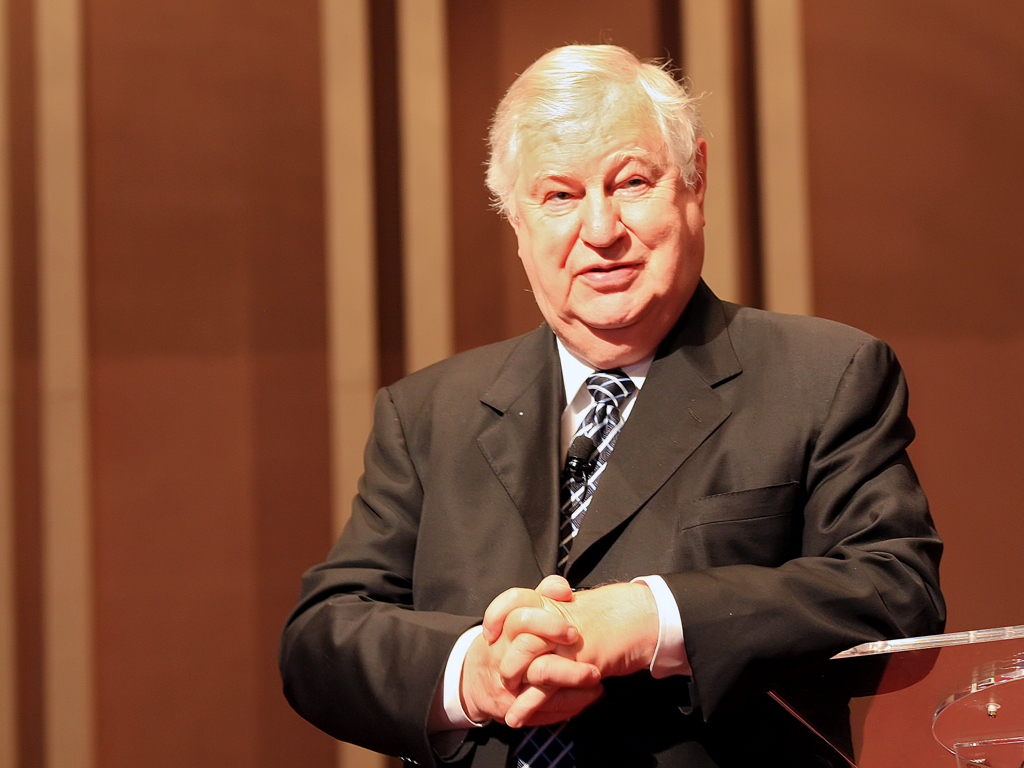 MOORE-Saying Oklahoma has a special place in his heart because his wife’s family is from the Sooner State, Henry Blackaby acknowledged he is one who believes in the mercy of God, and God could choose Oklahoma as the place where His mighty work begins.

Blackaby was the featured speaker at a “Returning to God Conference,” Sept. 5-6 at Moore, First. The president of Blackaby Ministries International, speaking to about 1,000 people Friday evening, said God will do what He’s always done through ordinary people, but “He has to have your permission.”

“When God speaks, it is an incredibly serious moment,” declared Blackaby, author of the highly successful Experiencing God materials. ‘He will be calling all creation to be aware of what He has said to you tonight.”

Blackaby pointed out that God is very personal and the Christian life is exceedingly personal.

“God calls you by name and singles you out,” he said. “He had something in mind when He issued that call.”

Citing the interesting series of moments in Peter’s life, Blackaby recalled Jesus telling His disciples they would all forsake Him on the night of His arrest, and Peter protesting he would never do that.

“After Peter denied Christ three times, Jesus, being led away with a thorn crown on his brow, looked straight into Peter’s eyes,” Blackaby noted. “He has a way of looking at us and breaking us.”

Blackaby reminded that the Lord hadn’t forgotten Peter, and that was not the last chapter.

“Jesus came to Peter after His resurrection, and three times, matching the number of denials, asked Peter if he loved Him,” Blackaby said. “Once that expression of love was settled, everything else could follow, and Peter was the one chosen to preach at Pentecost, where 3,000 were saved.

“We have to answer if we really love Jesus, and how we answer that question will determine what He will put in our hands from now on.”

Reading from 2 Cor. 5:10, Blackaby said we must all appear before the judgment seat of Christ.

“God will bring back to your remembrance this night in Moore,” he said. “Will He have to tell you what could have been if you’d responded to Him that night?”

Blackaby observed that when the God of the universe speaks, there are always only two choices-life and blessing or death and cursing.

He said revival waits on our personal choice.

“You have the opportunity to bring life to this nation,” he declared. “Have you taken seriously God’s invitation for you to hear His voice, or have you been practicing religious activity without a relationship?”

Blackaby said an aide to President George W. Bush told him the president uses Experiencing God for his daily devotions.

“Did I ever dream, out of the moment I did what God asked me to do, it would affect the life of the President of the United States?” Blackaby asked. “When you hear from Him, you’re hearing a word that God wants to affect eternity. There is no limit to what God can do through one person.”

On Saturday, Blackaby addressed “Family Renewal,” focusing on Deut. 6:1-9, and reminding fathers that it is their responsibility to teach their children “the commands, decrees and laws the Lord your God directed me to teach you to observe in the land that you are crossing the Jordan to possess, so that you, your children and their children after them may fear the Lord your God as long as you live by keeping all his decrees and commands that I give you, and so that you may enjoy long life.”

Blackaby also stressed that he believes “the most significant aspect of the Great Commission (Matt. 28:18-20) is not the first two things, but the third one. But in our day, we have condensed the Great Commission to making disciples and baptizing them. Those are prerequisites. Those are the things that come before the most significant instruction that Jesus ever gave, which is teaching!

“He said teach them to practice everything I have commanded you. Take every word seriously. (This) He has commanded us as part of the eternal, divine strategy for turning the world upside down.”

Blackaby said the home is “a marvelous place to teach. Tell your children about those spiritual markers in your life. Our families are God’s eternal strategy for affecting our world.”

Keith Haygood, associate pastor and minister of music at Edmond, First, was the worship leader. During the conference’s final session Saturday morning, he led the congregation in debuting his song, “Coming Home,” which he had composed specifically for the Returning to God Conference.

The final session was devoted almost entirely to prayer. Greg Frizzell, BGCO prayer and spiritual awakening specialist, led a prayer over Blackaby, who was leaving the conference with a very busy schedule ahead of him, including 26 speaking presentations over the next two weeks. Frizzell then led the participants in prayers of cleansing and intercession.

More than 1,200 people registered for the conference.