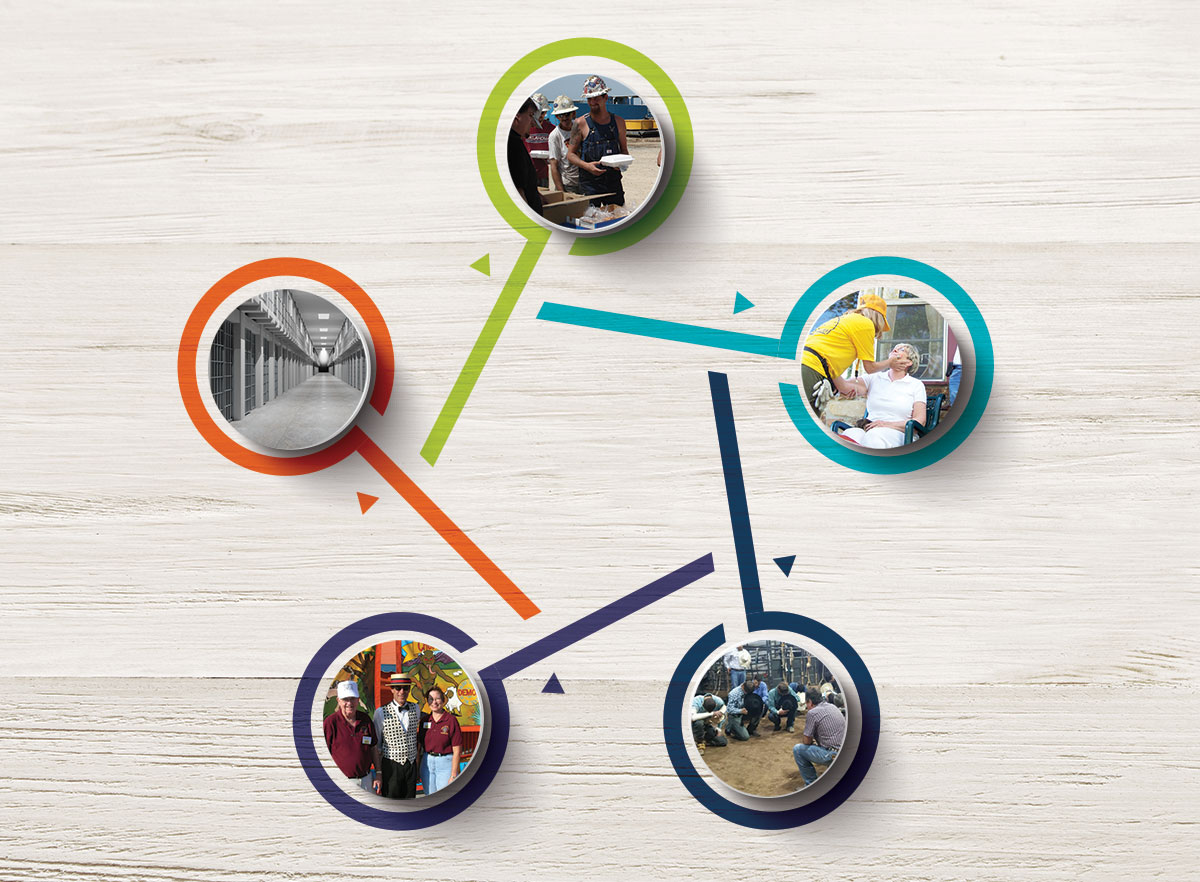 While the development of chaplain ministry has its roots in ancient history—as spiritual leaders provided encouragement and compassionate care to people who were constantly in crisis—the word “chaplain” originated in fourth century France. A traditional story relates the compassion of St. Martin of Tour, who, on one cold and wet night, was so moved by compassion for a beggar, he shared his cloak with him.

Upon St. Martin’s death, his cape (capella in Latin) was preserved as a holy relic and kept in a shrine that came to be known as chapele from which the English word “chapel” is derived. The guardian of the chapele became known as the chapelain. Today, the chaplain continues to guard the sacred, and to share his cape out of compassion.

The Baptist General Convention of Oklahoma (BGCO) chaplaincy program officially was organized in 1984 by Bob Haskins, and in 1986, Nicoma Park, First Pastor Joe Williams was brought on 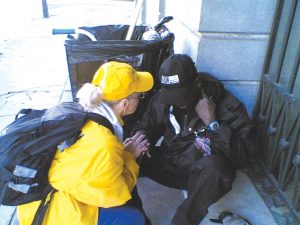 For years, chaplains have been meeting physical and spiritual needs in a disaster

board as chaplaincy and community services specialist. Under Williams’ direction, chaplaincy grew in many areas. One especially-successful new venture was the establishment of the State Fair Chaplain’s Corner, which was started as a pilot project in 1987 and continues today.

“We had positive responses and were given the go-ahead to plan for 1988,” Williams said in an Oct. 15, 1987 Baptist Messenger article. “We targeted the 4,000 people working during the fair, and visited many of them up to three times during the 17 days.”

Williams, who conducted two weddings that first year at the fair—one with the bride sitting side-saddle atop a carousel wooden horse—personally spent a total of 165 hours on the fairgrounds. In later years, the Chaplain’s Corner was directed by Oklahoma City Police Department chaplain Jack Poe and his wife, Phyllis.

Williams retired from the BGCO in 2000, and Leslie Sias was hired to lead the chaplaincy program. Sias stayed until 2002, then left to return to the Navy as a chaplain. Paul Bettis came on board in 2002 as the chaplaincy specialist, and was succeeded by Don Williams in 2014.

BGCO Executive Director-Treasurer Anthony L. Jordan expressed his appreciation to the BGCO’s chaplains for their powerful ministry over the past three decades.

“I have been amazed at the number of open doors that chaplains are able to walk through to serve people and to present the Gospel,” Jordan said. “Chaplaincy is one of those ways in which the local church is able to extend itself into the lives of people in every kind of situation in life. Chaplains can go where others cannot. They are the ministry of presence that opens the door to compassionate ministry and the Gospel.

“I give thanks to the Lord that when there are tragic events across our state, nation and world that Oklahoma Baptists have these ministers of presence who are there to hold somebody’s hand, sit down and listen and give them expressions of love that open the door, ultimately, to sharing the Good News of Christ with them.”

All chaplains serving with the BGCO undergo intensive education, including Chaplain Manual and Critical Incident Stress Management training. Chaplains also must attend annual recertification training, and all are endorsed by the North American Mission Board of the Southern Baptist Convention.

The BGCO currently has 459 endorsed chaplains.

Today, there are many different types of endorsed chaplaincy in Oklahoma. They all have proven to be effective in presenting the Gospel and seeing lives changed. The chaplaincy specialty areas 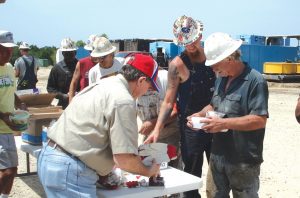 Serving food to oil field workers is one of many outreaches in which Oklahoma chaplains are involved.

BGCO Chaplaincy Community Ministries also reach out to thousands of people each year as well through three other significant ministries.

Organized in 1980 through the prayers and support of the churches in the Tulsa Metro Association, DaySpring Villa has an expanded ministry that reaches out to women and children in crisis because of domestic violence or other emergency needs. Its vision was achieved in part when the shelter opened on June 12, 1995 in its current location after receiving certification as a domestic violence shelter from the Oklahoma Department of Mental Health and Substance Abuse Services. Since then, DaySpring Villa has ministered to nearly 2,200 women and children.

The Baptist Mission Center (BMC), affiliated with Capital Association in Oklahoma City, provides meals, clothing, dental care, eye examinations/glasses, medical care, prescriptions, lab services and shots all free of charge. There were 692 churches participating in the ministry of the BMC during the past year. This service provides opportunities to share the Gospel of Jesus Christ.

Grace Rescue Mission, also affiliated with Capital Association, ministers to transient and rehabilitation program persons providing meals, overnight accommodations, clothing and other personal hygiene needs. Alcohol and drug rehabilitation programs are in place at the mission, along with chapel services, and Bible studies. The mission is in the 50th year of operation, and traditionally provides a special Thanksgiving meal every year.

The BGCO sends chaplains every year to the Sturgis Motorcycle Rally in the Black Hills of South Dakota in August, working with the Dakota Baptist Convention. The chaplains also work a smaller motorcycle rally in Sparks in June and October. The Chaplaincy Office also holds a retreat every year in the Oklahoma City area for chaplains and their spouses, and a luncheon during the BGCO Annual Meeting. At that time, awards for Career Chaplain of the Year and Volunteer Chaplain of the Year are presented.