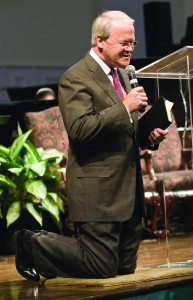 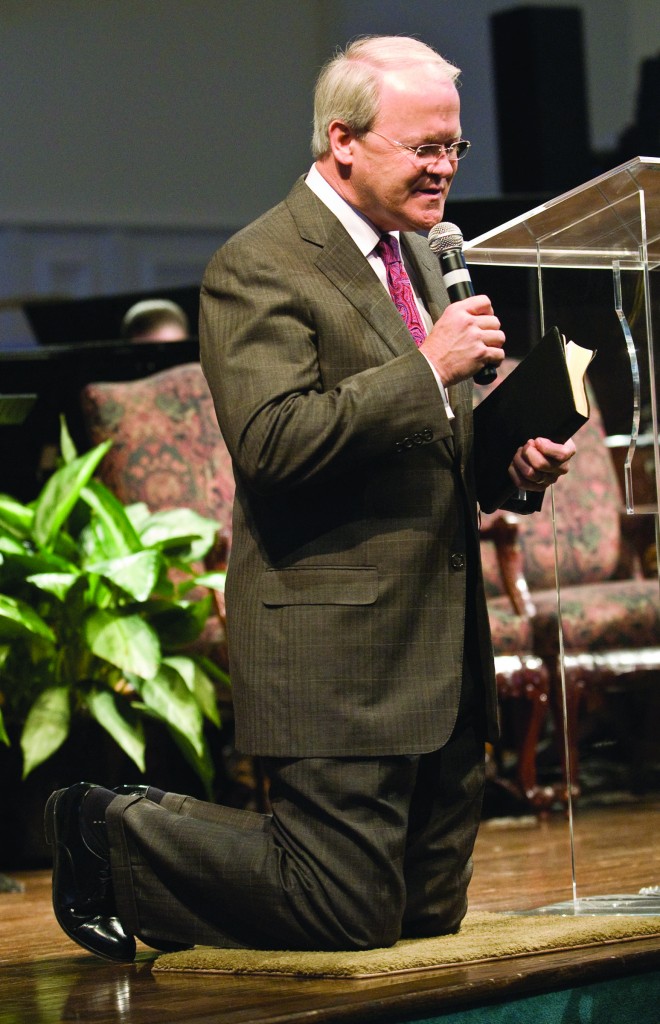 Representing the nation’s largest Protestant denomination for two years gives an individual keen insight into the workings of the denomination. It provides a behind-the-scenes look at how efficiently the SBC works and where there is room for growth.

Two years ago, The Christian Index interviewed Frank Page of Taylors, S.C., prior to his surprise election as SBC president in Greensboro, N.C. Much of what separated him from other nominees was his strong historic support of the Cooperative Program.

In this exit interview, the outgoing president shares what he has learned from the past 24 months in the critical areas and what he thinks the future holds for the Convention.

Q: Two years ago when you allowed yourself to be nominated you took a strong stand for saying it was possible for a church to be a strong supporter of both the Cooperative Program and its own missions work. Should CP giving be considered an indicator of a church’s commitment to and participation in Southern Baptist life?

PAGE: I see Cooperative Program support as a strong indicator of support for and participation in Southern Baptist life . . . which includes not only support of 10,000 North American and international missionaries, but coordinated evangelism and church planting efforts and the providing of a quality education through our seminaries.

I believe that is one of the reasons that I was elected president of the Convention two years ago-because my church’s long-standing support of our Southern Baptist way of cooperating with other churches through this important avenue of funding. I think that struck a strong note with many of our laypersons attending the convention. My election was a clear message from the grassroots that people feel very strongly about this issue.

Q: Is the Cooperative Program relevant today as more of our churches decide to fund their own missions enterprises at the expense of that funding channel?

PAGE: Many churches, both large and small, now find it much easier to be personally involved in missions. Transportation costs are lower than they were 40 or 50 years ago, we have a higher standing of living with more disposable income, and a higher spirit of volunteerism. All of these work together for more people to experience missions firsthand and I encourage that.

On the other hand I’ve never favored taking food off the table or resources away from missionaries who we placed on the field and using those funds to do personal missions. That is counter-productive to who we are as cooperating Southern Baptists.

On another note, we are living in an anti-denomination, anti-institution age where there is a growing disconnect on all levels of society, not just in the church. Some people choose to work more independently of larger agencies which they traditionally supported.

Then there is the issue of funding duplicate, yet competing, worthy ministries. Is our God able to give the resources to do both? Well, all I can say is that He’s done it in our church for years.

Q: How have you been able to walk that fine line between supporting both the Cooperative Program and funding your church’s personal missions ventures?

PAGE: First Church of Taylors, S.C., has one of the largest missions programs in the Southern Baptist Convention; in fact, we give more money outside the Cooperative Program than we channel through the CP, but that doesn’t mean we operate our own missions program at the expense of the national program.

As long as I call myself a Southern Baptist we will support the CP because that is what it means to be Southern Baptist. We will also support a large number of church-based missions trips.

The Cooperative Program is more relevant than ever as our number of missionaries and the cost of putting them on the field increases. The same is true for our educational ventures through our seminaries and our church planting and evangelism efforts through NAMB. The need to support the CP has not slackened, but increased as the challenges have increased.

Q: Much has been made about the Conservative Resurgence and its role in returning the denomination back to its historic roots. It has had phenomenal success on that front, but the Holy Grail of the Resurgency -renewed emphasis on evangelism and a healthy, growing denomination-seems to have eluded us. Why is that?

PAGE: The Conservative Resurgence dealt with one issue that very badly needed to be addressed-clarification and support of orthodoxy in our denomination. Was that necessary? I’d say an unqualified “yes.” To me, the problem is that there were and are other crucial issues that have not received the same passionate attention.

Q: Can you elaborate on those?

PAGE: I believe there are four.

_ First, we have a considerable number of churches that are declining or have plateaued and little, or nothing, has been done to provide them with any assistance from a national level.

_ Second, there has been a lack of a cohesive national strategy to help focus our churches on a comprehensive evangelistic effort. There has been no central rallying cry, no stack pole around which we could gather.

_ Third, there is a growing societal factor where people are antagonistic to the church and its message.

_ Fourth, I agree fully with Paige Patterson’s recent assessment of the busyness of our time and the simple apathy of our people not wanting to share the Gospel. I also believe that we have serious issues with the decline of our congregations due to many choosing to stay with a 1950s methodology while those around them are dying and going to Hell without relevant ministries to reach them.

Q: Continuing that thought, the Resurgence did return the denomination back to its historic roots. But “historic roots” seems to have taken on a new meaning with the rise of Calvinism at Southern Seminary, which was a surprise for many observers.

How do you see the Calvinism discussion shaping the future of the denomination, and is it as important as some would have us to believe? In light of the denomination’s continued decline, does the Convention have the luxury of time to spend so much of its energy and resources on such a debate?

PAGE: I have always been a proponent of Southern Baptists going back to their roots . . . of the First Century, not the 17th Century (of the Calvinists). It’s healthy to discuss theological issues, but at the end of the day, we need to come together in obedience to the Great Commission.

I believe very strongly that any discussion that prevents our coming together is being used by the Evil One to distract us from our prime objective as given by Jesus Christ.

Q: We are grateful for the Conservative Resurgence because it paved the way for Southern Baptists to reaffirm their belief in the Bible. But we seem to never have been able to recapture the evangelistic zeal for which we were historically known.

In fact, LifeWay President Thom Ranier recently acknowledged as much in his interpretation of the most recent Annual Church Profile figures when he stated he feared we are a denomination that has lost its evangelistic passion. Those figures, released April 23, showed that the number of people baptized in Southern Baptist churches fell for the third straight year in 2007 to the Convention’s lowest level since 1987, and that membership posted a slight decline.

How do you interpret those ACP figures? Are we losing-or have we now actually lost-that evangelistic identity that once made us great? Is our decline inevitable, or can it be reversed?

PAGE: I believe that many have lost their ability to present the Gospel in relevant ways in the 21st Century. If you continue with a 1950s approach, you will find it very hard to reach today’s culture. We have lost our ability to relate, as modeled by Christ and Paul, who gave the example to be all things to all people.

I am praying that NAMB, over the next decade, will provide us with a multi-faceted, flexible strategy in evangelism that will provide both the training and focus that we need for our churches. We have so many people asking for help in teaching them how to be more effective in their evangelism efforts. NAMB is poised to make a major difference and to help us turn the tide.

Q: A few years ago outgoing LifeWay President James Draper said he felt the proverbial frog was in the kettle in regard to Southern Baptist churches being unable to adapt to changing culture. He specifically referred to an apparent unwillingness of the denomination’s leaders, from the national down to the local church level, to accept the younger generation.

His comments created quite a stir and were rather convicting at the moment, but they seem to have been lost in the passage of time. Is the threat still with us or are we now truly open to a younger generation’s way of doing things, or is their way too unorthodox?

PAGE: For the past two years, my committee appointments have included a large number of individuals from the ranks of younger, non-involved, conservative pastors. Much of the ministry of my predecessor’s presidency, Bobby Welch, was among the non-involved.

I want our younger pastors and laity to know that, on a national level, we are listening and making the necessary changes to reflect who we are today. There is a large number of younger, biblically conservative pastors and lay people who know how to listen and relate culturally like the Apostle Paul exampled for us. That’s why we need to be more inclusive.

Q: Some churches, both more than a century old and those just started last month, have either removed “Baptist” from their name or never embraced it from their founding. Many say the Baptist name simply carries too much negative baggage and compromises their effectiveness in outreach.

What is your personal feeling on this trend, and does it confuse our identity even further? Is the Southern Baptist affiliation an asset or a liability?

In our age when individuals are increasingly anti-institutional, anti-big government, they don’t want to feel that they are part of a large group; they just prefer smaller, more personal settings and that appeals to them more. That’s why, in part, small groups have grown in popularity in recent years because people are looking for a sense of belonging.

Q: What do you see to be the greatest threats to the Southern Baptist Convention?

PAGE: First, the increasing numbers of declining and plateauing churches that manifest a desire to hold onto outdated methodologies and ministries.

Third, an apathy toward soul-winning.

Fourth, an increasingly antagonistic societal rejection of the Church in general.

Q: What is your Wish List for the Southern Baptist Convention, and do you feel these wishes are actually attainable?

PAGE: First, that Southern Baptists will truly come to believe that the Gospel is worth sharing, and that it is the power of Christ unto salvation.

Second, that our denomination will be able to provide serious assistance to those churches that are seeking help to move from their declining or plateaued existence.

Third, that there will be an openness in our denomination to new ideas and methodologies, even to the point of restructuring the denomination to maximize its effectiveness.

And yes, I believe that all of these are attainable.