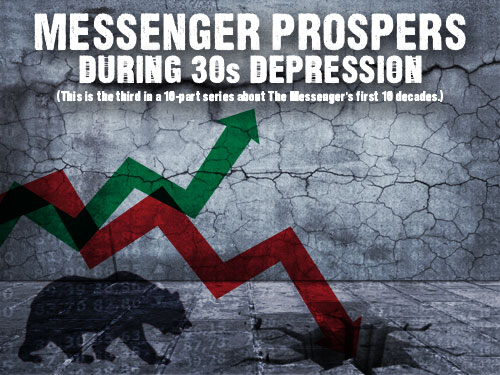 As the Roaring 20s gave over to the Great Depression era, the Baptist Messenger continued to grow in influence and subscriptions. E. C. Routh remained the editor throughout the 1930s, and launched a campaign to double the list of subscribers to 12,000, with the theme “Baptist Messenger readers know, grow, go.”

Content stayed much the same as the early days of the publication, although more international news crept into the pages, and there was somewhat less advertising.

The nameplate was updated for the first time in the Sept. 7, 1933 issue. It was changed again in the Oct. 25, 1934 issue and once again on Jan. 6, 1938, embodying the words Evangelism, Enlightenment, Enlistment and Enduement.

There was a section about churches and staff, called “Items of Interest,” as well as continuing news of Women’s Missions, OBU, BYPU, Sunday School and other ministries. Editor Routh frequently listed his travels across the state.

During the 1930s, the church budget plan of subscription by which a church subscribed for every family in the membership was inaugurated.

An editorial on March 16, 1939 explained why we need the Baptist Messenger.

Editor Routh wrote: “How will Oklahoma Baptists be informed and enlisted in building Oklahoma Baptist University, in giving for our fatherless and motherless children, in ministering to the sick, in providing for the aged and disabled preachers? We do not get that information from literature that goes into most homes. We know of only one publication that gives all of this information week after week; and we don’t see how any Baptist in Oklahoma can afford to be without that information.

“Let us start today and put the Baptist Messenger, for at least a short time, into every Baptist home in our churches. It will prove a worthwhile investment, not only for the welfare of the homes, but for the enlargement of the world mission task, and for the glory of God.”

During the 15-year tenure of Routh, the printing of the publication was moved from Oklahoma City, where it had been printed by various commercial printers to the university press in Shawnee, while the editorial offices remained at the Baptist Building in Oklahoma City.

Other items of interest appearing on the pages of the Baptist Messenger in the 1930s:

The 1930s, while forever remembered as the decade of the Great Depression, were filled with some memorable highlights. The population of the United States is 122.7 million, according to the 1930 Census. The Smoot-Hawley Act, which raised tariffs on 890 manufactured foreign products, is signed into law by President Hoover on June 17, 1930 and within two years, 25 nations had retaliated by raising duties on U.S. goods. The resulting economic nationalism is blamed for deepening the worldwide depression.