10 Decades in 10 Weeks: Messenger leaps into 21st century with changes 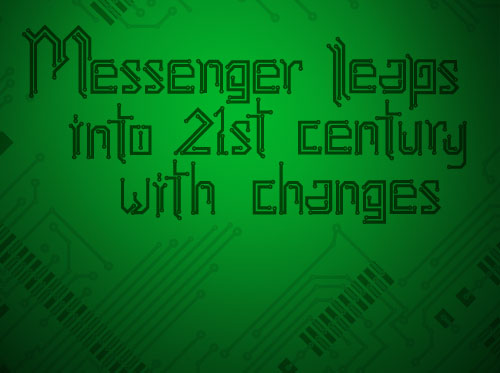 Production of the Baptist Messenger moved smoothly into the 21st Century with no Y2K computer problems that were predicted as the world transitioned to the decade of the 2000s.

The Messenger celebrated its 90th anniversary, became a four-color publication, outsourced printing for the first time and endured changes from shorter to longer stories, and from more photography to less. Circulation for the first issue of 2000 was 94,416.

The individual subscription rate was raised from $9 to $12.50 per year in 2001. Subscriptions to churches provided for their members remained at $7. “The subscription price for the first Baptist Messenger was $2 per year. After a compounded inflation rate of 3 percent for 89 years, consensus is that $2 would be $27.77 in 2001 dollars,” wrote Yeats.

The Messenger celebrated its 90th anniversary in 2002 with a series of articles.

In congratulating the Messenger on its 90th anniversary, BGCO Executive Director-Treasurer Anthony L. Jordan said churches that do not receive the Messenger often lose touch with the larger work of Oklahoma and Southern Baptists. He complimented the Messenger on not focusing on the fight between moderates and conservatives in the 1980s-90s.

“Across the years, as the controversy among Southern Baptists increased, many state papers focused on the fight,” wrote Jordan. “Their pages were filled with stories detailing the arguments, accusations and counter-accusations, and unchristian actions of fellow Southern Baptists. The Messenger has sought to give abbreviated accounts of these actions without filling its pages with them. In these years of turmoil, some state convention news journals were so full of battle news that the good news of the work of God’s people got lost. I am glad we have not allowed that to happen. It has been a conscious choice, and one that has encountered the wrath of the more vocal political types among us. I think it is one reason our circulation has stayed strong while others have taken major hits.”

At its Feb. 5, 2002 meeting, the BGCO board of directors approved the purchase of a four-color “Quad-Stack” web press for the Messenger, which was used in conjunction with the print shop’s current Goss web press. The color press was in place for the production of the Messenger’s 90th anniversary edition in May.

“The new four-color printing press allows us a much greater opportunity to communicate with younger readers, and gives our churches another tool for sharing what God is doing through His churches,” wrote Yeats.

On Baptist Messenger Day, Aug. 17, 2003, some facts revealed that the Baptist Messenger is received by every 15th household in Oklahoma, uses 80 miles of paper each week and is used by 167 churches and associations for their local newsletter.

In the summer of 2004, the Messenger purchased new equipment to make possible more options for the churches’ newsletters. For the first time, the “wrap” was instituted, allowing the Messenger to serve churches of all sizes. The previous method of printing the church’s news of the front and back cover of the Messenger required a mailing list of at least 100 addresses. The wrap consists of an 11-by-17 sheet of paper, folded in half and wrapped around the Messenger.

Yeats resigned as editor in October 2005, moving to Louisiana as the director of communications for Louisiana Baptists. In his last editorial, Yeats said he counted serving Oklahoma Baptists as one of the highest honors in his life.

“I have been blessed to share printed words of truth with you every week for eight years. While serving here, I have had the incredible opportunity to lead an outstanding team of writers, support staff and printers.”

Circulation at the time of Yeats’ resignation was 82,888. It had hovered around 90,000 for much of his eight years, and topped 100,000 on occasion due to special promotions.

In February 2006, Ray Sanders, BGCO communications team leader, was chosen the Messenger’s ninth editor. Circulation was 81,226. In his first editorial, Sanders said, “I approach this role on my knees with much admiration for the men who have gone before me. I consider it a privilege and a great responsibility to serve Oklahoma Baptists in this capacity.”

During Sanders’ editorship, a Messenger Radio show was produced weekly, featuring Sanders and Managing Editor Bob Nigh as co-hosts, and aired over KQCV and podcast on the Internet.

March 1, 2007 was dubbed “A new beginning for the Baptist Messenger,” with shorter stories, larger action photography and more coverage related to Christian life, family, health and business. It was no longer just the Baptist Messenger, but the Messenger Network, an integrated media operation designed to reach people “in print, on the air and anywhere.” It was also the first time the printing process was outsourced and not done in-house or at Oklahoma Baptist University. Circulation was 77,583.

Sanders resigned in September 2008 to become a member of the executive team with the Giant Companies, a Christian-owned leadership development and business strategy organization. Circulation at that time was 76,129.

Doug Baker, director of public relations for the North Carolina Convention became editor in July 2009. Circulation was 72,467. In his first editorial, he wrote, “For almost 100 years, the Baptist Messenger has endeavored to engage the church and the world with the Gospel of the Lord Jesus Christ. The paper must once again reaffirm her commitment to the Word of God and the local churches she serves, even as each issue seeks to maximize every opportunity for the advancement of the Kingdom of God.”

The format was changed with fewer photos and longer, more in-depth articles. By the end of the decade, circulation was 71,848.

Jim Davis and Louis Hale, with a combined 38 years of experience, retired from Messenger Press in 2006.

Baker left as editor in November 2010, and a year later, Brian Hobbs, who had been BGCO director of communications since June, 2011, was elected the publication’s 11th editor.

Since its beginning, the Messenger has employed editors and staff who have been recognized across the convention, many of them moving to positions with other state papers and Southern Baptist Convention agencies. Writers have been recognized with awards. Norman Jameson, Sarah Zimmerman, Dave Parker, Pierce and Williamson have received  awards for their writing from Baptist Communicators Association.

Throughout its 100 years, the Baptist Messenger has endeavored to inform, educate, encourage, challenge, uplift and inspire Oklahoma Baptists while communicating the Good News through its pages. About 100 million words later, that is still the goal of your weekly newsjournal.